I expected Boo! A Madea Halloween to be mindless fun. Instead, it was chilling. 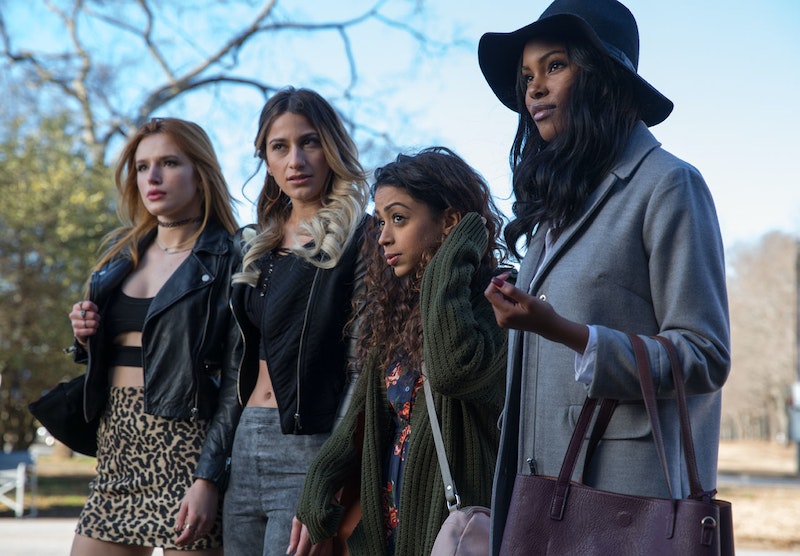 I've never seen a Tyler Perry film, and had watched basically no pre-publicity for this one. But my wife and son caught a preview, involving Madea fighting zombies, and they thought it looked funny. I was curious, and came along. I figured it’d be a typical Hollywood comedy. Bodily function jokes and slapstick; this I was prepared for.

And to be fair the film was not entirely lacking in bodily function jokes and slapstick. Madea—played by Perry in drag—punched a number of frat boys in the face. Her cranky brother, Joe—also Perry—hits a spooky clown in the head with a hammer. Madea's cousin, Aunt Bam (Cassie Davis), talks about her problems with incontinence and boasts about her pot prescription. It's moderately amusing.

The core of the film isn't the gags, though. It's an earnest hatred of children. The plot of Boo! revolves around Tiffany Simmons (Diamond White), a high school senior who wants to go to the local frat's Halloween party. Her dad, Brian (Perry again), forbids her, and since he has to spend the evening working, he asks Madea to come over and watch Tiffany to make sure she stays put.

This seems like a fairly low-stakes sitcom set-up. But Boo!, despite the jokes, is sincerely disturbed by Tiffany's defiance of authority. The film spirals into supposedly funny, but actually vindictive, violent fantasy. Brian is a weak, new age father, who won't hit his children, a wishy-washy stance for which he’s roundly mocked by the old people. Madea jokes about having put Brian in the hospital when he was four years old. Joe, who is Brian's dad, even more sadistically recounts an incident in which he threw Brian off the roof of their house, inadvertently puncturing his genitals because Brian had a number two pencil in his pocket. Viewers are supposed to laugh at this description of horrific child abuse—and the fact that Brian's penis is damaged, because he's an emasculated git who won't beat his children.

No fear though; the old geezers teach Brian to be strong. While he doesn't actually strike Tiffany, he does help arrange an elaborate "scared straight" scenario. First, at Madea's urging, he threatens to throw her out of his house. Then he, Madea, and the others make her think her friend died at the frat party, and enlist cops to arrest her and her peers, complete with handcuffs and a bus full of supposed convicts making prison rape jokes.

This is all supposed to be amusing, because everyone knows prison rape and psychologically traumatizing your 17-year-old is amusing. But the lessons about parental authority are presented as serious; Brian's come-to-discipline moment is treated as an after-school-special moral. Tiffany reveals she lost respect for her dad because his wife, her mom, slept with someone else and left him. She sneers at him for letting everyone push him around—and is grateful when he browbeats her into accepting his absolute authority. Dads need to keep their kids in line; children need discipline and patriarchal authority. Threaten to put them on the street, terrorize them for wanting to go to a Halloween party, throw them off the roof—they'll thank you for it eventually.

Adults may chastise children, but they also want to be like them. Much of the humor of Boo! is watching old people act like kids. Madea and her friends are horny, ill-behaved, and irresponsible. They're frightened of the dark, smoke pot, use bad language and want to scope out boys at the frat party and get in trouble with the police. It's as if the adults need to repress and control children in order to steal their youth for themselves, just as Bam spends her Halloween sneakily taking candy from kids' bags while pretending to give them lollipops. The film cheerfully licks its lips at young people's sexuality, with dance scenes of 18-year-old girls twerking and shimmying, and the old people lusting after young frat guys. But Tiffany's interest in the same frat guys must be repressed and violently controlled. The film never shows Tiffany making out with the boy she likes, but it's willing to make violent gross jokes about her rape by a female prisoner. Sexual coercion by adults in the film is more acceptable than consensual sexual activity that young people choose for themselves.

Boo! could be seen as reinforcing stereotypes about black male emasculation and black family discipline. But the truth is that hatred of and lust for children is part of mainstream American culture in general. Jillian Keenan, author of Sex With Shakespeare, told me in an interview that 70% of American parents still spank their children. Perry's film is just a variation on all those moral panic think pieces about sexting or hook up culture, which decry the sexualization of young people while voyeuristically displaying for adult consumption the sexualization of young people. Adults get the pleasure of theatrically disapproval and the pleasure of furtively imagining the naughtiness. Win-win.

Perry's film has ghosts, zombies and clowns: a panoply of traditional Halloween spooks, provided for laughs. But what the film actually fears is children—and that in turn justifies any patriarchal sadism. In Boo!, the kids in costumes aren't nearly as frightening as the parents standing behind them at the door, mercilessly promising to keep them safe.