An interview with the photographer and documentarian behind Line of Beauty and Grace: A Film About Jock Sturges. 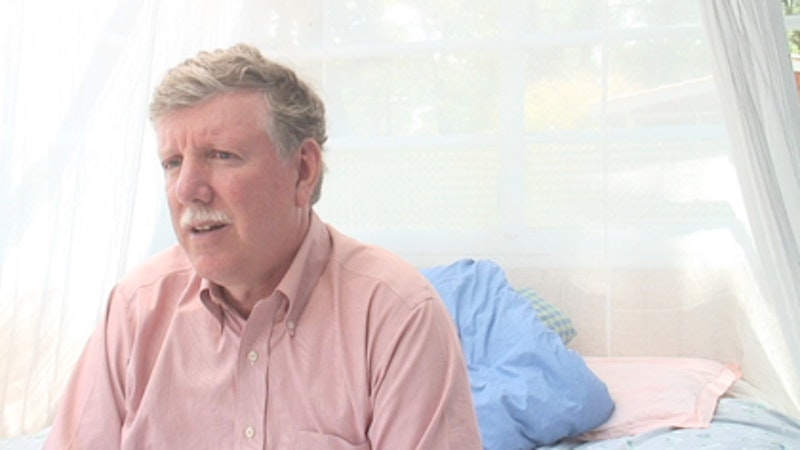 Jock Sturges, in a still from Line of Beauty and Grace. More stills below.

This is the second in a continuing series of Splice Premieres, articles that profile artists, musicians, and filmmakers that are making careers outside the mainstream media. Along with interviews and background information, these articles will contain samples of the artists' work, including unreleased or newly debuting material. The first Premiere was Zach Kaufmann's interview with St. Louis alt-country band Theodore.

Christian E. Klinger’s first documentary, Line of Beauty and Grace, concerns the controversial American photographer Jock Sturges, whose plaintive images of nude children and young women have attracted accusations of child pornography. Sturges shoots his photos in Montalivet, a town in coastal France noted for its hospitality to naturist vacationers, and Klinger traveled there to film the photographer and his models as he worked. Sturges typically works with the same models for years on end, and he brings his family to the shoots, as well. Line of Beauty and Grace therefore documents an artist who creates his own spare, comfortable worlds in both his work and life.

The movie aired on German television and is now available on DVD from the website for Klinger’s production company, Amadelio Film. It briefly mentions the controversies surrounding Sturges’ work (a phenomenon, Klinger points out, that only occurs in America), but begins with the assumption that his photography is inarguably important and viable artistically. After watching Klinger’s film, which glides along with a calm, placid tone that mimics Sturges’ otherworldly images, it’s hard to feel any other way. Line of Beauty and Grace is a stylistically appropriate celebration of an artist and his vision, an informative documentary that, like its subject, looks for moments of startling beauty during humans’ interactions with the natural world. I exchanged emails with Klinger about his film, his production company, and Sturges’ work.


SPLICE TODAY: Tell me about your career thus far. What kind of film and video work did you do before getting involved with Amadelio? What are your goals for the production company?

CHRISTIAN E. KLINGER: I’m a photographer and studied by the Academy of Visual Arts in Leipzig (“Leipziger Schule”). I worked for magazines and Internet platforms like nerve.com. So photography is my great passion in my life. I started [taking pictures] when I was 14 years old. Here you can see some of my work.

ST: What was the process of making Line of Beauty and Grace? Did you show it at festivals or do a straight-to-DVD release? What kind of marketing goes behind a movie like this, and how do expect or hope viewers will encounter it?

CEK: No festivals! We only produce this DVD and negotiated with a German TV channel to broadcast our film. That’s all. We believe in the long tail. This means we’ll sell this documentary via the web, throughout the world. We prefer to be independent.

We didn’t spend a single Euro on marketing. We have 30,000 unique visitors on our websites per month. That’s enough to sell the film in a good way. And we really sell it worldwide. Most DVDs we sell go to the United States, Canada, and Japan. Then comes France and the United Kingdom. But we also sell DVDs to Singapore, Ukraine, Australia and India.

View the trailer for Line of Beauty and Grace

ST: What drew you to Jock Sturges? There are some passing, oblique references to the controversies over his work, but mainly Line of Beauty and Grace is a very reverent portrait and defense of the artist. Since the film spans France and Germany, how long did it take to shoot? What kind of crew did you bring, and what was it like to be with Sturges while he worked in coastal France?

CEK: I first saw [Sturges’ work] in the late 90s. I wasn’t that impressed, because the pictures were too sweet for me; they have a very unreal and heavenly impression. Several years later I was in my atelier and a young woman thumbed through a book of Sturges and she was deeply shocked. She was screaming. And I was impressed from this impact to this young woman. Years later, when I started to work with Amadelio, we decided to try a documentary about Sturges, because I didn’t understand his work. And this is always a very good point to start.

One of the big projects in our generation is the relationship between men and women. How we can live together, how we find a way to accept the differences between the genders? After a long period of time when men suppressed women, we saw the fight of brave women for freedom. Now we have this battlefield, where all classical models of relationships get killed. But this was the logical way. Now we have to close the books between man and woman and have to develop a peaceful model to live together. A model where man and woman see eye to eye with each other, while they are not equal. Or in other words: I believe that man and woman are of equal value, but they are not equal!

These are my emotions to film this documentary. I deeply believe, that women are not the better ones. I don’t believe that the Indians are better than the Japanese, the white are better than the black. Everybody is on a certain level of his or her development.

I am absolutely conscious about that this documentary is not politically correct. Art should never get under control of secret services, gender mainstreamers or political correctness officers.

The controversies about the work of Jock Sturges are very strange to me, because from my European view, there is really nothing bad or provocative in his pictures. There are adolescent, mostly nude people, on the beach of Montalivet and California. That’s all. I believe that Sturges really wants to catch the beauty of the human being. A natural beauty. It gives us a little bit of the dream from paradise.

View an interview from Amadelio with Italian artist Maurizio Cattelan

I made this film in a reserved style because I like the work of Sturges and I believe his pictures will endure. In 100 years the people will be interested to see his work. This is something that is very rare. Most artists, like Cindy Sherman, Jenny Holzer, Jeff Koons or Damien Hirst, are contemporary artists, which means they are only relevant in their time. After their demise, their work will disappear in the archives of collections and museums. So my premise was to make a film out of time, in a classical way, without too much explanatory notes. I tried to make a film, which doesn’t have connections to the opinions and statements of our times.

The shoot took six days in France; one day by Steidl, Göttingen, Germany; three days with the theorizer, museum director and former German gallerist (Jean Christophe Ammann, Prof. Klaus Honnef, Bodo Niemann, respectively). But it needed months of editing by Daniela Krien. It needed months of preparation. I was the crew. I operated the film camera, I recorded the audio and I made the interviews. And I had no treatment or concept. I worked intuitively. I love to work alone.

ST: Can you recommend a place to start for those people who don't know Sturges' work?

CEK: Here is a nice portfolio from Jock Sturges.

ST: There's a softness, a placidity to Sturges' work that you seem to be consciously echoing in your direction of the film. All the shots—whether of natural scenes, interviews, or verite moments on-site—tend to go on, unedited, for long periods of time, as if you're withholding judgment and allowing your subjects to make their own points in their action. Who are your directorial influences? I sensed a little Terrence Malick, particularly in the nature scenes that open the film and reappear throughout.

CEK: I didn’t want to judge and I believe we should always be very careful with judging, because we are mostly not so wise that we can judge. So I went to Montalivet without a picture in my brain, without a concept, without an opinion about Sturges’ work—I was empty. I had only a book from Schiller with me (The Kallias Letters on aesthetics). Then I started to film and I love to film.

The influences: I can only say that I watch 100 films a year but for about 20 years I have had no television. I was impressed by David Lynch’s Mulholland Drive, Sofia Coppola’s work, and the film Kids from Larry Clark. Sometimes I watch the Dogme 95 films of Lars von Trier (I love Breaking the Waves, a really deep and religious film) and Thomas Vinterberg. His films Das Fest and It’s All About Love are really touching and outstanding. But also I like the work of George Clooney like Syriana and Michael Clayton.

I don’t like Woody Allen; he is too nervous.

ST: What other projects are you working on, either with Amadelio or otherwise? Do you see yourself focusing more on documentaries or do you have designs for a feature at some point?

CEK: We want to produce five documentaries about five photographers. And I’m dreaming that I get the chance to make a film about love. But nothing is sure.

ST: Can you recommend a film?