Sons of Anarchy Is Nothing But Manipulative Drama

Jax dies for our sins. 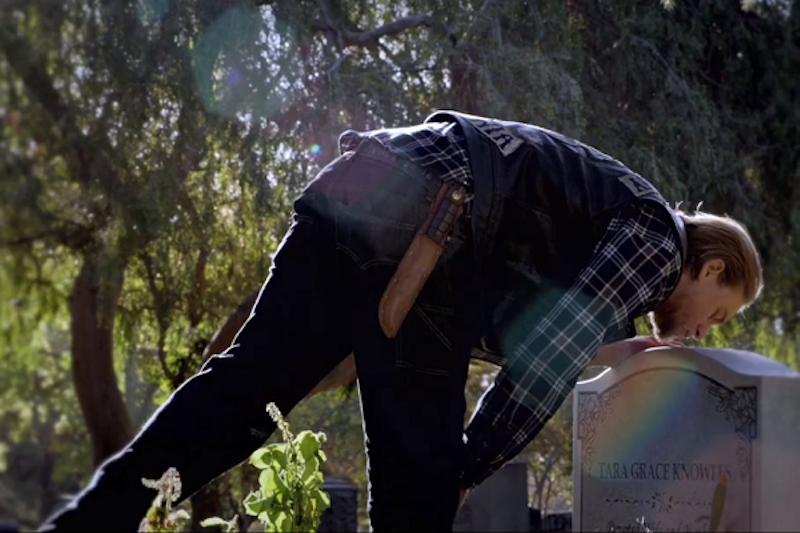 There was a scene late in Tuesday night's series finale of Sons of Anarchy that sums up all the problems I've had with this show for a few seasons now. SAMCRO has taken a Mayhem vote on Jax—it's unanimous, everyone agreeing that Jax should die for killing Jury (a fellow SoA president) and lying about his reasons. This was no shock; Jax had told Chibs this is what needed to happen. He accepted it for SAMCRO's sake. So the whole episode is Jax tying up loose ends: visiting Opie (remember Opie?) and his wife's graves, putting his finances in order, saying goodbye to his kids, confessing everything to DA Patterson, and killing Marks and Barosky. So Jax drives up to a nondescript warehouse, ready to die. He cuts the patch from his jacket, puts his gun down and tells Chibs, "I'm ready." Tig and Happy escort him a few feet away and hold him. Chibs reluctantly takes aim. This is it, we think: Mr. Mayhem. Jax will finally get what's coming to him. Then Chibs shoots Happy in the arm. A towel is quickly given to him to stop the blood. Jax asks him if he's okay. Chibs says, "I'll tell Parker you laid down some fire and got away." "I could never put this burden on you guys," Jax says.

Jax already knows how he'll die, on the same desolate highway as his dad, J.T., all those years ago. This is exactly what happens. Jax says his goodbyes, an APB is put out on him for killing Gemma and Unser, and—in the end—he revs up his bike and drives right into a tractor trailer (as about 50 cop cars follow behind). A lot of fans liked it, I'm sure. It's also contrived, sentimental bullshit. Not that Jax wouldn't go out that way, but let's go back to the warehouse. Why do we have this drawn-out scene? Because since at least season four, SoA has been nothing more than manipulative drama. We, the viewers, are supposed to think that Chibs will really kill Jax. But instead he shoots Happy. Make no mistake: Jax and SAMCRO planned this. There's nothing impromptu about it. "I'll tell Parker you laid down some fire and got away." Okay, fair enough. But why act the whole thing out? And does Happy having a gunshot wound to the arm really sell it? More to the point, if Jax knows he's going out just like J.T., if he intends to kill himself a couple hours later, why not tell Parker that SAMCRO voted for Mr. Mayhem, but Jax killed himself before SAMCRO could get to him?

This is the mark of really shitty writing. Nothing about the warehouse scene makes sense, and all of SoA's faults were only compounded in this final season by Kurt Sutter's ego. Why did FX allow the extra-long run times on every episode? There was such a horrific lack of editing. A friend and I watched last week's episode, "Red Rose," together—it runs 77 minutes, about an hour-and-a-half with commercials. I had to laugh when Wendy and Nero are talking in the kitchen about Jax, only to be interrupted by Brooke, "Hey, um, do you want me to pick up Abel today?" "No," Wendy says. "I got him sweetheart, thanks." Seven seconds that just couldn't be cut. The whole season was like that. Diversionary sidetracks: Like Chibs' love affair with the new sheriff, or SAMCRO protecting the preacher's family. I won't even get into the mysterious homeless woman, or the ridiculous Christ symbolism strewn about the finale.

Sutter originally pitched SoA as a re-telling of Hamlet, and even had the audacity to end the show with a quote from the play, "Doubt thou the stars are fire; / Doubt that the sun doth move; / Doubt truth to be a liar; / But never doubt I love." I have a better quote for him, this one from Macbeth: "It is a tale / Told by an idiot, full of sound and fury, / Signifying nothing."