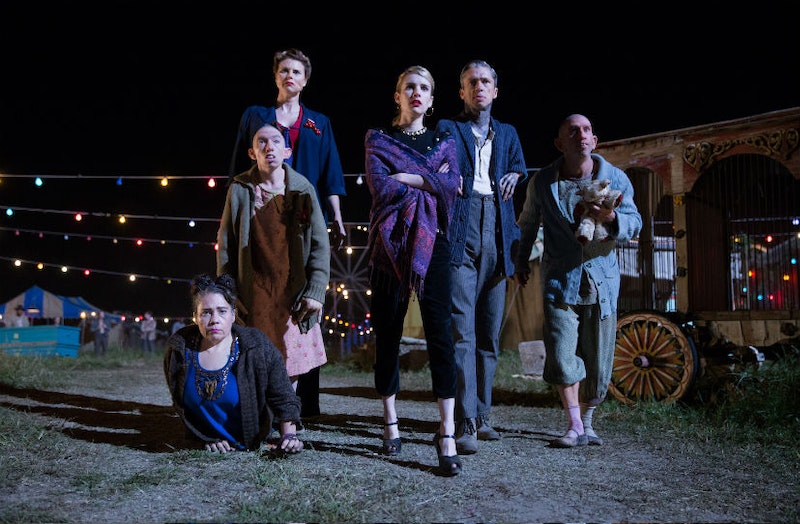 • The episode opens with Dandy coming to Esmerelda to read his fortune as a truly gruesome flashback reveals he’s been murdering and beheading Avon sales ladies who come to his door. He has turned his mother into a human puppet to play games with. Esmeralda thinks Dandy is coming to her because he is tired of breaking hearts but really he just wants to make sure he’s not going to be caught slaughtering people.

• Jimmy and Ima Wiggles are together now? They’re seen adoringly spooning food to each other before Jimmy overhears Dandy whistling as he leaves camp. Dandy vows to destroy everything Jimmy loves in this world because it will be “so much fun.”

• Bette and Dot finally resurface, hiding out in a motel in West Palm. Dot is wearing a really strange blonde wig when Jessica Lange discovers them and claims she has to hide them from an angry mob that's after all the freaks (there's no mob).

• Jimmy is a waste case and Esmerelda finds him balls deep in his new girlfriend. Thankfully, Emma Roberts brings out some of her old Madison Montgomery charm from season three and slaps the crap out of him, telling Jimmy’s new girlfriend “you’re nothing! You could be a donut or a sock for all he cares.” #harsh, girl. Later things get weird at a tupperware party when Jimmy is unable to service the ladies and instead sees his mother, Ethel (who died last episode), sitting on the couch.

• Dandy comes along rather quickly though to slaughter everyone at the party and put their bodies in a giant swimming pool. He then tells Regina (Gabourey Sidibe) about the benefits of bathing in blood, and it feels like every time Gabourey is in American Horror Story her plot involves some psychopathic white person who enjoys bathing in blood.

• At this point, Dandy believes he is a god, but all I can think of is that Dandy’s ass deserves its own credit. He decides to spare Regina after he can’t convince her to take a blood bath with him. I really hope in the end it is Regina who ends Dandy’s reign of terror.

• Bette and Dot are taken to a barn where Jessica Lange and Denis O’Hare claim they’ve convinced a doctor to perform a separation surgery. It looks like the production company got lazy halfway through the season, because scenes with both the twin’s heads are rare, and the director opts for odd close up camera angles of each head individually as they speak. Sarah Paulson does some incredible work this episode in a extremely emotional scene playing both twins discussing their separation.

• Dell’s storyline ends up being the most interesting. After he and Denis O’Hare have a creepy encounter in which O’Hare shows off his freakishly large penis, Dell attempts to kill himself. He sees his dead ex, Ethel, explain to him that his shame is on the inside, therefore it consumes him. As someone who struggled to come out of the closet for years, this was probably the most poignant moment in the season. Dell attempts to hang himself but is saved by Desiree (Angela Bassett).

• Hands down the most horrifying (and timely) scene is when Dandy is confronted by Regina and the police, only to have the cop not believe Regina and listen to Dandy’s speech about how he is going to get away with it. Dandy offers the cop a million dollars cash to dig a hole for Regina and he promptly shoots her in the head. It seems like poor timing given the social and political climate of late, but perhaps it is Ryan Murphy’s social commentary on the corruption of the police force.

• Bette and Dot come to see drunk Jimmy to tell him that they’ve decided not to go through with the operation that will separate them. Dot reveals how much she has loved Jimmy since the moment she’s met him in a truly moving monologue and then she takes off her shirt immediately. Who doesn’t love a good, naked, proclamation of love? Apparently not Jimmy, he gives them the classically male, “I care about you, but I can’t.”

• Dandy makes good on his promise to ruin Jimmy’s life by getting his new cop buddy to arrest Jimmy for all the murders he has committed. The episode ends with Jimmy in handcuffs being carted away to prison. With only a few episodes left this season, this show may have finally won back my attention.