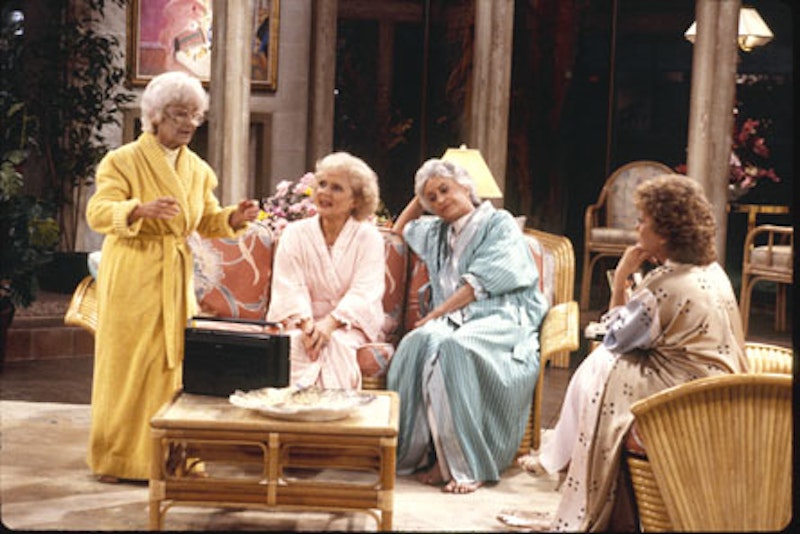 1. For years, I was convinced that the song that plays during the Golden Girls opening credit sequence—Cynthia Fee‘s version of “Thank You For Being a Friend”—was actually performed by Rue McClanahan.

2. Hard drugs were massively en vogue in the 1980s, sure, but this exchange—from a Season 1 episode where the Girls’ home is burgled—never fails to shock me for some reason:

[Blanche enters in from the kitchen with flour on her face and blouse.]
Blanche: [stunned] They got my jewels.
Dorothy: But I see they didn't get your cocaine!
Rose: [shocked] Blanche has cocaine!

Maybe it’s the age of the cast; maybe it was the era; maybe it’s the fact that Blanche really looks like she just pulled a Tony-Montana-in-Scarface coke-mountain face plant. Whatever the cause, this line of dialogue, from the next season, is less startling, perhaps owing to the lack of a visual aid:

Dorothy: In the past few days, I have been turned down for every available part time job in Dade County that didn't involve selling cocaine.

3. In college, The Golden Girls was a constant source of mirth among a certain group of friends; perhaps coincidentally, there were four of us, though I’m not certain who best corresponded to one Golden Girls character or another, but it wouldn’t be a stretch to tag reserved, whip-smart Amal as Dorothy, daffy, exuberant Sanjeevani as Rose, (then) male-slut me as Blanche, or diminutive Cecilia as Sophia. There were no perfect fits, though, as either Cecilia or I could be as authoritatively professorial as Dorothy on our best days, and we all shared moments of all-out willful idiocy and meme rattling, many of these after 11 p.m. on weeknights, homework procrastinated indefinitely, no cheesecakes in sight.

4. My favorite Golden Girls episode ever—“The Days and Nights of Sophia Petrillo,” from Season 4—is a slice-of-life study in contrasts. As the episode begins, it’s a rainy morning (a weekend morning, presumably, as the younger women all have day jobs); Sophia, trench coat-clad, announces that she’s headed to the market to buy a nectarine. Dorothy, Blanche, and Rose bemoan what they view as a depressing, insignificant routine. Dorothy: “Let’s face it, life is as interesting as you make it, and at Ma’s age, it’s harder to make the effort.” We then follow Sophia’s action-packed day, which put the lie to her housemates’ concerns: see Sophia rattle sabers with unscrupulous greengrocers, see Sophia rally conduct and rally the spirits of a volunteer band of fellow seniors who perform for money to donate to a charity (“We’ve lost our edge—haven’t we learned anything from the tragic examples of Mike Douglas and Ferdinand Marcos?”), see Sophia volunteer at a hospital as a candy striper. Meanwhile, the other three—all 20+ years her junior, all able-bodied, all with their drivers’ licenses—snack, gossip, reminisce, and generally waste the entire day; they don’t even make it out of their pajamas. If every day is a gift, Dorothy, Blanche, and Rose have left their days unopened; Sophia, meanwhile, seized hers eagerly, living it to the fullest.