Is The Social Network Misogynistic?

And does it even matter? 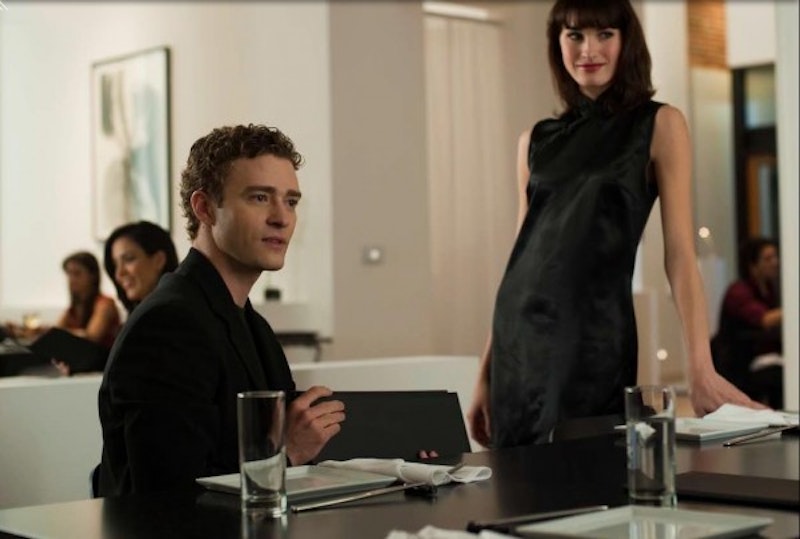 Now, however, the movie stands accused of misogyny, with its female characters a parade of, as Salon puts it, “gold-diggers, drunken floozies and that ‘bitch’ who got away.” When you’re tabbed as an Oscar front-runner, as Social has been, this kind of thing comes with the territory.

The lion’s share of critical opinion about the film has centered on the general misanthropy of its main character, Facebook founder Mark Zuckerberg, played with dead-eyed hauteur by Jesse Eisenberg. But it’s hard to empathize with anybody in the picture: Justin Timberlake’s wheeler-dealer Sean Parker might as well have a “Weasel” sign around his neck, while the Winklevoss twins, both played by Armie Hammer, come off as the kind of privileged über-WASPs that usually end up on the outside looking in of any college-set movie not named Van Wilder.

The one basically likeable character is Andrew Garfield’s Eduardo Saverin, Zuckerberg’s staunchest ally and the nascent Facebook’s CFO. But even he ends up being more a figure of pity; watching his transformation from Cautious Guy with Deep Pockets to Shoulda Seen It Coming dupe leaves one wondering just how smart you really have to be to get into Harvard.

None of the major players in the Facebook story were female; after all, Zuckerberg first created “Facemash” as a tool for Harvard’s XY-chromosome set to rate the attractiveness (or lack thereof) of the XXers. As a result, most of the female characters are indeed either groupies of some kind (the bong-ready babes in Palo Alto), “bitches” (Rooney Mara’s Erica Albright, whose break-up with Zuckerberg essentially sets things in motion), or coke-hoovering shorties who turn out to be psychos (Brenda Song’s Christy).

I haven’t heard of Fincher responding to charges of misogyny, but screenwriter Sorkin has increasingly been vocal on the topic. He first went on The Colbert Report to explain why the movie’s females are all “high or drunk or blowing guys in the bathroom,” saying that he didn’t mean to imply that Harvard’s entire distaff population behaves in such a manner, and then took to writing a lengthy response to a comment on a blog post by TV writer Ken Levine as his ultimate mea culpa.

“It’s not hard to understand how bright women could be appalled by what they saw in the movie but you have to understand that that was the very specific world I was writing about,” Sorkin posted. “I was writing about a very angry and deeply misogynistic group of people. These aren’t the cuddly nerds we made movies about in the 80’s. They’re very angry that the cheerleader still wants to go out with the quarterback instead of the men (boys) who are running the universe right now. The women they surround themselves with aren’t women who challenge them (and frankly, no woman who could challenge them would be interested in being anywhere near them.)”

These women—whether it’s the girls who are happy to take their clothes off and dance for the boys or Eduardo's psycho-girlfriend are real. I mean REALLY real. (In the case of Christy […] I conflated two characters—again I hope you’ll trust me that doing that did nothing to alter our take on the events. Christy was the second of three characters whose name I changed.) [….] I wish I could go door to door and make this explanation/apology to any woman offended by the things you’ve pointed out but obviously that’s unrealistic so I thought the least I could do was speak directly to you.

Actually, there are two perfectly sane, reasonable female characters in The Social Network, who in effect bookend the movie by daring to utter a discouraging word in Zuckerberg’s direction: Mara’s Erica and Rashida Jones’ Marylin Delpy, one of Zuckerberg’s attorneys who skates up to the line of flirting with him but ultimately maintains her professionalism. (And, as Sorkin admits, is entirely made up.) That neither of them attends Harvard says more about Harvard than it does about women.

I have to say that I didn’t walk out of The Social Network with misogyny on my mind. Instead, I think that Edelstein and Sorkin both have it right. The film’s view of women—like its view of everything—is told primarily from Zuckerberg and crew’s viewpoint. Blame the message if you like, but not the messengers.