A new twist on an old formula. 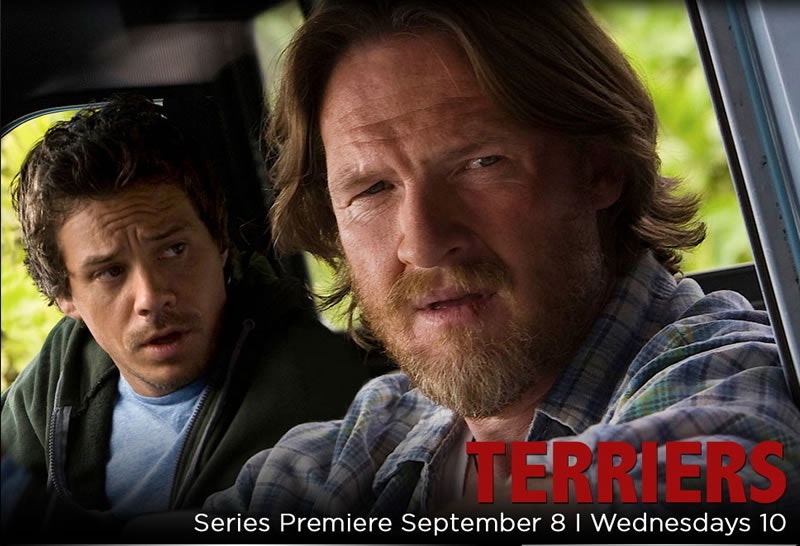 I’m a TV junkie, so September may be my favorite month. Even though networks have been shuffling around season premiers for at least the past decade (three of my favorite shows now run roughly January through May), September is still generally the month when all the best stuff comes back on: Dexter, It’s Always Sunny, Sons of Anarchy, and House, just to name a few.

Last night I watched the first two episodes of Terriers, FX’s new show about a couple of down-and-out PIs. With the exception of AMC, FX is easily the best basic cable network for original programming, with the aforementioned It’s Always Sunny and Sons of Anarchy, as well as Rescue Me, Damages and Louie, which just wrapped up it’s hilarious first season.

Terriers owes a debt to old buddy-cop shows like Miami Vice, though it mostly avoids the schmaltzy pitfalls of the genre. Donal Logue plays Hank, an ex-cop, dishonorably discharged for his drunkenness, now sober and partnered up with friend and ex-petty criminal Britt (Michael Raymond James), who turned his life around after meeting his girlfriend Katie. As PIs go, they’re pretty small time. No office, no business cards, they work out of a pool cleaner’s van and mostly get by with help from Hank’s old cop friends, including his surly former partner (played by Rockmond Dunbar, best known for his years on Showtime’s Soulfood.)

Surely season one’s over-arching storyline—something about a big real-estate corruption deal involving a powerful local businessman, Robert Lindus—takes a back seat to the characters themselves. Logue and James have good on-screen chemistry, the dialogue is clever, and it’s more of a relationship comedy than anything else: Hank is still desperately in love with his ex-wife (who reveals in episode two that she’s newly engaged), and Britt’s girlfriend Katie wants to have a baby. Apparently the third episode introduces Hank’s sister Steph, a manic-depressive MIT grad, and things get even more complicated.

More family-oriented programming fans will know Logue from the sitcom Grounded for Life, but I remember him best from his supporting role on ER, where he played a Medevac pilot who ends up marrying Dr. Susan Lewis. Logue’s a great character actor, with a sort of excessive nice guy appeal, and along with James, the two lend some genuine charm to their characters.

Terriers airs Wednesdays at 10 on FX.