It's For The Kids

Red Riding Hood is creepy in ways its makers don't know about. 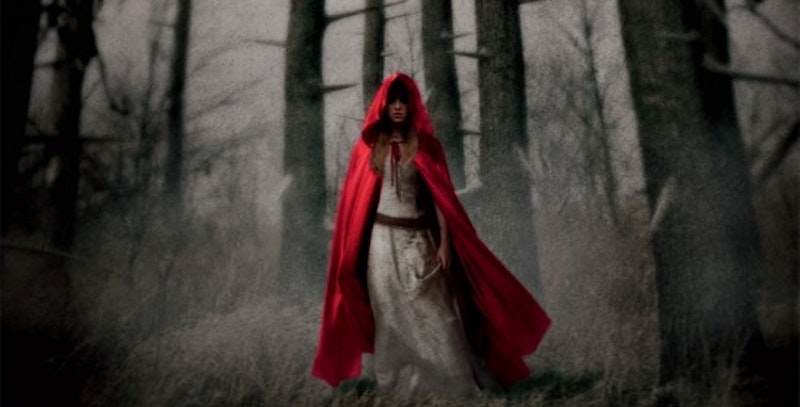 There’s a tradition, or maybe it’s just a habit show biz can’t break. I mean the exhibition of beautiful young creatures who are what they are but can’t do very much. The two-legged blossoms wobble on stage long enough for everyone to get a look. Then they wobble off before the moment breaks. Red Riding Hood is pretty much of a teen exploitation picture, so in this case the blossoms have to do the work of stars. But they’re not up to it, so the movie cuts around them like a rock video showcasing a potbellied, pigeon-toed heavy-metal singer with an appendix scar. Angle from below left, from above right. Pan, tilt. And keep cutting. We get one glimpse after another of the kids, a stream of them; probably such glimpses total most of the show’s running time. But they don’t add up to a single good look at a person performing an action that’s worth looking at.

The film has plenty of close-ups, a good number of long shots, not a lot of medium shots. This is especially the case for the kids. Does the heroine (Amanda Seyfried) have a head attached to a body? It’s my impression that she does; the rush of images pretty well planted the idea in my brain. But I’m not sure I ever saw head and body in action together. Look at the head by itself—and that’s mainly what you do, in close up after close up—and you can’t fight the idea that the girl is really a flesh lollipop housing a face. She’s a luxuriantly cultivated head and spine, and that’s all—a concocted, overripe piece of artificially designed humanity grown in a high-tech cavern, then transferred from its bunker to ride atop a temporary host. The carrier has shoulders and stilt-like legs and is always wrapped in silver-white clothing that hides it from sight.

Body and head are joined only when a scene can’t be shot any other way. The lollipop’s real function, its reason for being, is to fill the camera with face. The face looks like a sports car but also like a candy shop and a set of expensive linen. It glows and curves, every inch; nowhere is just face, everything is part of an effect. One curve lands and another takes off: lips, cheekbones, chin, eyebrows, forehead. Each curve claims your eye because each one is complete in itself. The face could break apart, disassemble into the mudflap girl’s breast line and a German toaster’s ON button, and your eye would still hang among them more or less comfortably.

The boys (there are two, Max Irons and Shiloh Fernandez) came out of a different vat. The bodies made it, but the faces didn’t bud. Swivel the chief love interest and you see a nub of a profile wing into view. It speaks and a wisp of verbal communication hangs there, then trembles apart: “Valerie, I’m wrong for you.”

The girl-head and the boy-slabs all have the same problem with speech and expression. The actors make you feel like their faces are located an uncomfortable distance in front of them. They’ve been trained to gather in close to the camera and arrange their features in little bunches that represent one state of mind or another. The kids can do this and also voice words, but it’s like they have to do the job while leaning across a fence. They project fretfulness. Their voices bumble into the air, sounding like afterthoughts but also like the product of intense, unhappy effort. The voices take just enough shape for emphases to settle in odd places. Boy to girl: “I saw you with Peter. I know you don’t want me like that.” Why you when there isn’t any other girl who might be wanting him? Everything the kids come up with seems provisional and hopeless.

The film uses narration as a crutch, so the kids’ voices wind up limping inside your head like thoughts you’d have on a long, unwanted car trip. I don’t mean the thoughts’ phrasing or content, since everything verbal in Red Riding Hood sounds like YA page filler. I mean the disheveled mutter that builds up in your head when there’s nothing for your thoughts to do and they’re not smart enough to go away.

Checklist. The movie’s director is Catherine Hardwicke, who directed Twilight. That made money, and the new picture can lay out for Julie Christie and Gary Oldman (who a decade ago would have been Claire Bloom and Christopher Plummer). The movie sweeps through helicopter shots of mountains and forests, lavish stuff, then paints in digital effects that are all too big: super-glow mist clouds, yellow lingering stretches that represent sun and look like football fields of half-teleported margarine. Woodland-fantasy buildings are painted atop the fake landscape, and that’s the crowning touch. The density of their detail atop the details of the CGI landscape produces the Revenge of the Clones effect. Up on the screen there’s a storybook illustration so hulking and overbuilt it could knock you into the ground. Look at it and it’s like everything in the world is a paste-up job.

Not that the buildings and sets in Red Riding Hood have anything wrong with them on their own terms. Thomas E. Sanders did the production design, Don Macaulay did the art direction, and probably there’s a coffee-table paperback with sketches and photos.

“It’s strong!” The dialogue produced some favorite moments. Christopher Plummer (Gary Oldman) as the werewolf hunter: “Look everywhere. Well, look for the signs!” Later: “He’s aiii-ding a witch.” The last word, “witch,” is delivered like a tight little clap. A letter would have to drop out if you wrote it: “a … wich.” The heroine, in voiceover, sounding very YA: “What if they were right? What if the wolf knew something I didn’t? Maybe there was something dark inside of me.” Accented as “there was something,” etc. Grandma, the Julie Christie character, taking thought: “No, Lucy wouldn’t do that. But she might have responded to Henry.” Grandma again, chiding: “I do not want you to use that knife.” Context: because of the monster being loose, Red Riding Hood has a knife tucked against her leg. (Or somebody’s leg, because these are insert shots).

Stage directions as dialogue: “It’s strong!” “I heard something over there!” The guards bellow these out. The werewolf is tearing off people’s heads, and a guard runs up to Gary Oldman and yells, “It’s strong!” “You’re a terrible liar. I know you feel the way I do.” “Valerie, I’m wrong for you.” “You will be happy again.” “We are much the same. “ “No, I’m nothing like you. You’re a murderer.” “The only life I want is with you.”  “I was trapped in that brazen beast all night. I finally broke out.” “To kee-yill the werewolf.” Oldman again.