Slip Into This House

In the original 1973 film Westworld, nostalgia is the most powerful intoxicant. 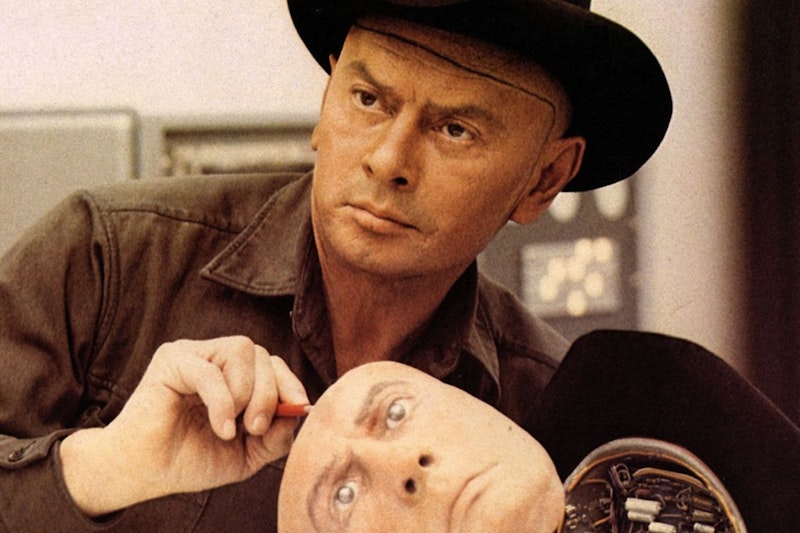 One wonders what the appeal of the theme park is for Michael Crichton. A park of dinosaur clones wreaked havoc in his 1990 novel Jurassic Park (made into a movie in 1993). Well before that, though, he’d imagined another story about inhuman inhabitants of a theme park turning on their creators—but Westworld, a 1973 film written and directed by Crichton, was about robot gunslingers. It was followed three years later by a sequel Crichton wasn’t involved with, a short-lived TV series in 1980, and a more warmly-received HBO series that started in 2016.

The Criterion Channel included Westworld in its 1970s science fiction collection, and it has its points of interest, as an action movie and as a film about the 1970s’ fears of technology. It opens with a commercial, introducing us to the idea of Westworld, Medievalworld, and Romanworld, three linked theme parks respectively imagining the American Old West, the European Middle Ages, and the decadence of the Roman Empire. Human-like robots play the parts of the inhabitants of these worlds, interacting with tourists come to spend a week or two in another time.

Peter Martin (Richard Benjamin) and John Blane (James Brolin) are two tourists who have the bad luck to visit Westworld when the robots go haywire. As cinematic robots are wont to do they turn against humans, and an artificial gunslinger played by Yul Brynner sets out to kill the two men. Meanwhile, behind the scenes, techies led by the Chief Supervisor (Alan Oppenheimer) desperately try to fix things.

The movie’s got a strong sense of pace. The physical danger to the tourists takes a while to get going, but the foreshadowing of the techies working to figure out what’s going on and keep their audience from noticing any problems creates a sense of rising tension that carries the first half or more of the film. Once things do crack up, the movie gets a charge of weirdness from the way the different artificial worlds cross over: Brynner, in almost the same costume he wore in The Magnificent Seven, stalks through a carpeted office complex and a stone castle.

The slow build allows the movie to repeatedly explain how its premise works. It’s oddly reminiscent of The Matrix: watch that movie now, and you’re reminded how little a mass audience understood cyberspace and virtual reality, as the basic concepts get reiterated. So too with Westworld, which explains its concept right at the start with the fake commercial, then again in conversational dialogue, and so on until everyone in the audience understands what’s going on.

And yet, the story still has holes. Notably, it’s hard to figure out how the violence works. You can see how it’s a thrill for a tourist to take part in a duel. But if you’re in a bar fight—explicitly part of the package in Westworld—how do you know you’re fighting a robot and not a human? There’s lip service paid to the idea that the guns, when they’re working right, detect human body heat and always shoot wide; but that doesn’t seem to account for ricochets and shrapnel.

At one point the behind-the-scenes controllers shut down the power on the robots, apparently forgetting they have a charge that’ll keep them going for some time. And also not realizing that they’ll be trapped in a sealed chamber without air circulation. Dialogue establishes that Brynner’s gunslinger has advanced sensory capacities, and we see him able to detect human body heat—except when the plot of the movie requires that he not notice a character trying to hide.

Usually, though, the technology at least feels as though somebody spent time thinking about it. The cause of the robot uprising is a mysterious “illness” that somehow spreads from robot to robot like a human infection; it’s an example of a computer virus before the idea of a computer virus had really been articulated. Similarly, one of the robot designers admits, “We don’t know exactly how they work” because the robots were designed and built by other robots. Crichton accurately forecast one of the emerging issues with AI.

What makes the movie work is that it’s grounded in a certain perspective of human nature. Why do human beings want to visit the primitive past? To have an adventure, but the implication of the film is that “adventure” means violence and especially sex. Guests, cast in the role of hero, can shoot or stab robots. And they can fuck them; there’s a brothel in Westworld with a robot madam played by Majel Barrett, while a visitor to Medievalworld is shown taking part in a tryst with the Queen. Romanworld, meanwhile, seems to exist purely for the decadence—every reference to Romanworld contains some more-or-less sly reference to sex: guests are encouraged to “please feel free to indulge your every whim.” There’s a very 1970s approach to sex, acknowledging its relevance without really being able to speak about it explicitly.

But the movie’s core idea anticipates Jaws: faced with a danger to innocent people, authorities refuse to close a tourist attraction because it would hurt their bottom line. The town won’t close the beach; the owners of Westworld won’t close the park. What’s a shark or a homicidal robot compared to their bottom line? In the 1970s, this was a dramatic idea. Now it’s closer to business as usual.

No wonder people, then and now, want to slip away to another time, whether past or future. The commercial at the start of the film implicitly contrasts a very 1970s chintziness to the idealized past of the theme parks, and so also contrasts the present when the movie was made to the future it describes. The scientists and managers meet in dingy conference rooms with ashtrays and bare walls, but the theme parks and the movie exist to provide a sense of escape from this kind of mundanity. So at the end a vengeful fantasy kicks down the walls hiding the real world and swaggers into the world of offices and business conferences.

What sticks with me from the film is not the action, the anticlimactic ending, not even the presence of Brynner. It’s the scenes of bored technicians putting together a medieval banquet. It’s the dialogue-free nighttime sequence of the cleanup crew collecting robot bodies. A competent action movie with some odd structural choices, Westworld is most appealing because it’s aware of the backstage work that goes into making a good show.