Sit Down and Shut Up

Some of the best recent movies don't have to say much. 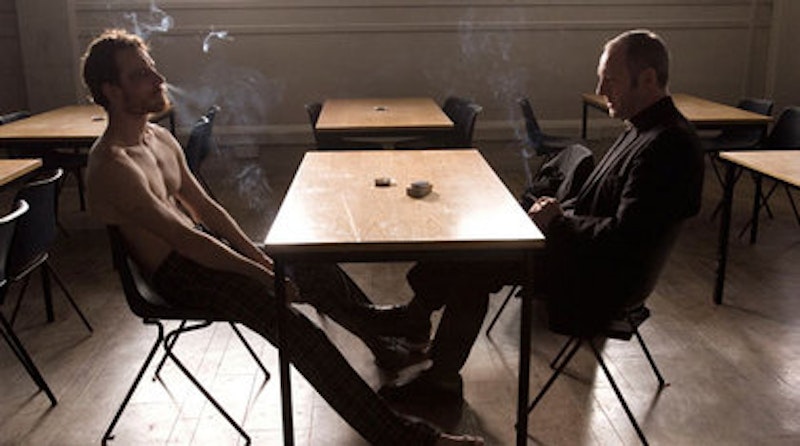 Most people don't get the chance to see snooty movies at exclusive—and expensive—soirees like the New York Film Festival. Most people, too, don't have the time or patience to sit through "serious" films like 4 Months, 3 Weeks and 2 Days, last year's much-lauded film about a woman in communist Romania trying to get an abortion. It's a shame, because I've realized something about my taste in film from these kinds of movies.

I like movies that hit you in your face and leave you for dead that scream so loud you’re laughing or crying. But 4 Months, a NYFF pick last year, and Hunger, a pick this year, are quiet movies, with sparse dialogue and deceptively simple images. Both, along with NYFF pick 24 City this year, show people facing difficult odds but refuse to tell viewers what to think. They are modest movies that don’t ask for too much attention.

Except they do receive a lot of attention. 4 Months won the Palme d'Or at Cannes and Hunger won the Camera d'Or, for a first feature film. There is kind of a formula here. Both movies have subtle camerawork, little dialogue and dramatize people in oppressive situations. They seem to say: "Watch me. I'm important, but I'm not going to make a big deal about how important I am."

This can be annoying, and I almost expected to be annoyed when I decided to watch Hunger last weekend in New York. Indeed, it took me awhile to get over how beautiful and arty the direction was. It was almost too good. But I can't wear cynicism for very long. Instead, I was blown away by Hunger, the story of a group of Irish revolutionaries in the 1981 IRA hunger strike, which is subtly powerful in its slow and quiet approach to the event. The real-life incident was an international media spectacle, with photographs of the group's leader broadcast on television daily as his body deteriorated from hunger, but the movie puts the noise of the media in the background. We hear but never see Margaret Thatcher. A priest delivers us the news of the media frenzy outside the prison walls. It's tempting for a director to show the media and controversy on camera—perhaps in the way The Queen did—because they are eye-catching and keep the viewer interested. Sometimes it's better to leave it to our imagination, though, which is what the director of Hunger, Steve McQueen, a celebrated visual artist, did.

Not that these movies shy away from graphic imagery. 4 Months confronts the act of abortion in more direct terms than I've ever seen in film, though maybe I just haven't seen the right movies. Hunger spends much of its final reel showing a body graphically deteriorating from starvation and includes one extensive scene of police brutality.

But the lack of dialogue frees them from opinionating. After leaving Hunger I wasn't convinced the IRA members were morally justified and the British were evil incarnate (though it's easy to leave with that assumption) and leaving 4 Months I didn't have to be convinced that abortion should be legal (though my own biases lead me to that conclusion.) But I did think about the details of how these struggles happen, about the horrors of an unfeeling government and what some people have to go through to lead the lives they want to lead. That's something I rarely think about, let alone get to see with such clarity.

This is something some Hollywood and postmodern movies, especially those mobilized by identity politics, lack, but that many art-house directors excel at beautifully. Some of my all-time favorites include Sofia Coppola's The Virgin Suicides (women), Gus Van Sant's Elephant (adolescence), Charles Burnett's Killer of Sheep (urban black struggles), and Ang Lee's Brokeback Mountain (homosexuality). These movies don't offer solutions and don't completely diagnose the problem. Instead they talk about experiences and circumstances and enrich our understanding of something we may be unfamiliar with. They deal with the quiet particulars, not the noisy debates and the neat grand narratives. We're all the better for watching them.