Sing Him to the Greek

A review of Infant Sorrow’s joke-rock-album. 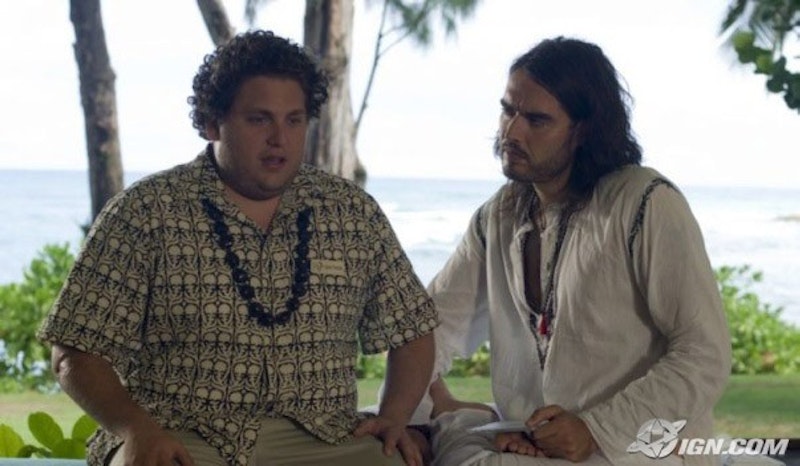 I knew I’d get a laugh out of Get Him to the Greek, a new comedy from the Apatow team about Aldous Snow (played by comedian Russell Brand), a British hound-dog rock star first seen in Forgetting Sarah Marshall. It seemed fast-paced, colorful and dirty enough to make me smile—and it was.

More importantly than the humor, though, is that Russell Brand not only looks like a rock star, he performs like one, and when he gets up on stage to sing, it’s good. Shockingly good.

In Greek, when Aldous, and his band Infant Sorrow begin their comeback show with the catchy screw-you anthem, “Going Up,” I didn’t even realize I was rocking out until feeling myself awkwardly dancing in the movie seat, wiggling my butt armrest to armrest. When the movie ended, I wanted the soundtrack. I figured it would be a few Infant Sorrow songs mixed in with the classic British punk rock anthems heard throughout the film.

What I didn’t know is that the soundtrack is only Infant Sorrow songs—a full album of their delightfully twisted and dirty lyrics, creating a mix of Oasis, The Darkness and, on one song, a pitch-perfect Beatles imitation. The songs aren’t parodies of British rock—but more like hyped-up tributes to them, as if the whole genre took a cocktail of speed, coke and Viagra before hitting the recording studio.

Brand delivers powerhouse vocals from the first song on. He doesn’t have the range or practice that comes from years of professional singing, but he makes up for it with seemingly limitless energy. It also doesn’t hurt that you can hear the grin in his voice when he croons out lyrics like, “With my pen and paper, I am sitting at my table top/and once again, think of riding Daphne,” in the aptly titled “Riding Daphne.”

It would be easy to write Brand’s album off simply as a joke, but the music is just as catchy as the humor. It’s actually stuff worth listening to. The album starts with a strumming electric guitar straight out of Tom Petty’s American rock songbook, but quickly changes tone with Aldous’ vocals, borrowed from the cheeky likes of The Clash and The Sex Pistols. He’s having fun, and it comes out in the album.

In fact, this whole album is fun, and everyone’s in on the joke. Brand is backed by a phenomenal support team, with songs written by Jarvis Cocker (Pulp), Carl Barat (The Libertines), singer Dan Bern and actor Jason Segal.

Not every tune is a winner, though—“Searching for a Father” steps over the so-cheesy-it’s-fun line into simply cheesy and it’s cringe worthy when Aldous rock-talks through the love ballad “F. o. h.” The album is capped off with two songs by Aldous’ girlfriend, Jackie Q (played by Rose Byrne), which are equally amusing send-ups, full of auto-tuned hooks about sex. As Jackie coos, “A ring, a ring, around my dirty poesy / My rear pocket is so fit and so damn cozy” in “Ring Round,” you snicker and feel wrong all at the same time.

I’m not sure I would have enjoyed the album as much without having seen Greek and/or Marshall, as I happily pictured the wild Aldous Snow cranking out each tune. Still, as an accompaniment to two very funny films, this is a very fine album.