Forbidden World and Galaxy of Terror both get the DVD and Blu-ray re-release on July 20. 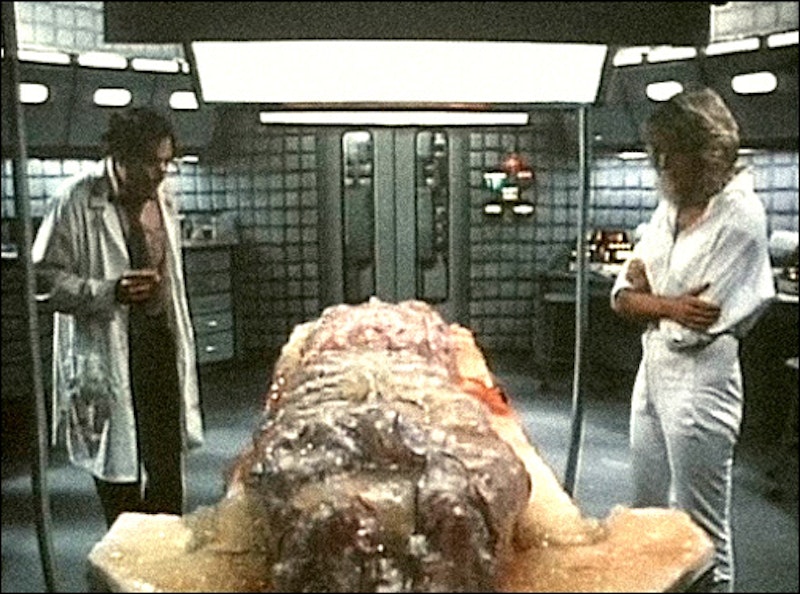 Two 1980s sci-fi exploitation films produced by the legendary Roger Corman will be released on DVD and Blu-ray on July 20. Forbidden World and Galaxy of Terror are unabashed rip-offs of prominent mainstream sci-fi films of the time—most notably Ridley Scott's Alien—aping their degeneracy and sleaziness. Compared to the films that inspired them, both Forbidden World and Galaxy of Terror are considerably more low maintenance, operating on shoestring budgets and employing no-name cast and crews. Sets were re-used between both films, and they share a bleak yet charmingly fatalistic point of view, with no heroes and death is inevitable for most.

Forbidden World is the better of the two films, utilizing a claustrophobic environment to increase tension just as Alien did. Corman's pulp aesthetic pulsates boldly in both of these films, as gore and sex are preferred over character development. That said, Vint feels perfect as Colby, and it’s not hard to imagine him in more significant “rogue adventurer” roles of the time. Fox Harris’ Cal is similarly charming, a chain-smoking mad scientist who ends up sacrificing himself to kill Subject 20. Other than them, the rest of the cast is totally forgettable and are little more than walking and talking cliches.

Galaxy of Terror adheres to a similar formula, following the crew of the spaceship Quest as they land on and explore the world of Morganthus, where they encounter a host of caustic space bugs and must “conquer their greatest fears.” The movie is heavily indebted to Freudian psychology, but because it is so poorly and haphazardly made, this doesn’t come off clearly. We spend most of our time with these characters in poorly lit and uninteresting sets, and all of these people feel completely anonymous and expendable. Forbidden World has sort of a hero in Mike Colby, and an endearing misfit in Harris’ Cal; Galaxy of Terror gives us no one to root for, no one to sympathize with. Even Cabren (Edward Albert), the last man standing, is indistinguishable from the rest of his crewmates.

Strong characters aren’t to be expected from this strain of cinema, and the characters in Galaxy of Terror are appropriately little more than bags of meat, traipsing around in space until their time has come. What makes these films is their disarmingly bleak and caustic outlook on life. Brutally violent deaths elicit no great emotional reaction, and no one is glamorized or romanticized. We feel no connection to anyone and we're not meant to; the fact that the cast and crew are largely anonymous only encourages this disconnect. These are dark films, imbued with cynicism and a prurient aesthetic.

These films serve a purpose for what they are: cheap, gritty sci-fi filled with violence and sex. They are both ingrained with a disarmingly cold tone, a perspective uniquely endemic to pulp cinema. It feels like the actors and the crew know that nothing is at stake, and it’s this carefree attitude that makes the films fun to watch. Corman and his company are perfectly self-aware of what they do, and as a result much of their work feels casual and low-risk. Forbidden World and Galaxy of Terror lack the pretensions of the films that inspired them, and are often vastly more fun.