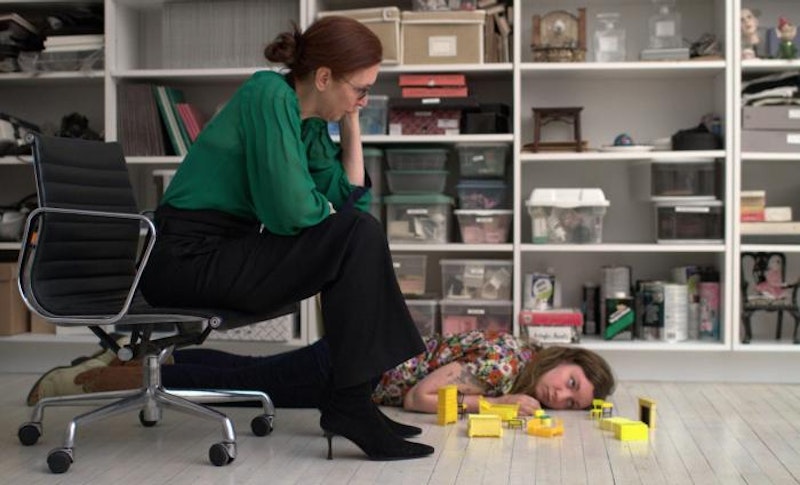 If you’ve never heard of Lena Dunham, you’re excused. Dunham’s first theatrically released feature, Tiny Furniture, is this year’s critical darling in DIY cinema (last year was Humpday, the year before Medicine for Melancholy). As with most DIY films, these films saw very limited releases and, if they’re blockbusters, gross in the low six-figures.

But Tiny Furniture is so quietly inventive and comic it has catapulted Dunham, like Lynn Shelton before her, to higher profile projects. You’ll be seeing Dunham soon on HBO, acting and writing for her Judd Apatow-produced show, Girls, the network’s first Sex and the City rehash (three girls in NYC) since the finale.

Don’t think we need another Sex and the City? Never fear. The series, which already has a full order, won’t be your typical gal-pal fare.

How do I know? Watch Tiny Furniture and you’ll see. Dunham has a keen eye for post-collegiate angst. She neither romanticizes nor indulges it. She takes for granted its lack of glamour and, most importantly, understands it is (mostly) unworthy of sympathy.

As the job market for college graduates has softened over the past few years, numerous films have tried to address the problem: people in their 20s without direction, sometimes living with their rich Boomer parents. Movies about post-collegiate angst either romanticize it (Devil Wears Prada), make way too much fun of it (Knocked Up) or onerously dote on it (most mumblecore films).

Dunham’s Tiny Furniture eschews the handheld camera earnestness of the mumblecore set and the outlandish hijinks of dude comedies and rom-coms. Instead she sets her camera on a tripod and shows us, plainly but humorously, how ridiculous it is for rich kids to ask for pity after getting their degree.

In Tiny Furniture, Dunham locks our lead (Aura, played by her) in her mother’s fabulous TriBeCa loft and has her shuffle around aimlessly, from room to room, lover to lover, block to block and friend to friend, making all the wrong decisions. Nobody wants Aura around, and Aura doesn’t want to be home. But her unwillingness to grow up keeps her inside her home, like a child. She fights with her sister, a literary prodigy, and her mother, an art world superstar.

See, Aura has few excuses for making bad decisions. She should be able to get a job—her mother is incredibly wealthy and connected (the New York art world is a small one). She knows who her real friends are—her New York friends are shallow and unstable. She knows what men are right for her—she has no good options, and instead indulges the needs of every guy who shows interest.

We do feel a little bit sorry for Aura. She isn’t the skinniest or most attractive girl in New York, and that’s hard. Her mother is an uptight control freak who’s nurturing instinct is a bit underdeveloped. And let’s be honest: getting a career started in New York is never easy. But Dunham’s brilliant decision to set most of the film in glamorous settings really cuts off our sympathy. We see the multimillion dollar loft and have to ask: are you really in that much pain? It’s a simple populist impulse, but an unavoidable one.

So when Girls premieres, I wouldn’t expect three girls with the hottest shoes and the best careers. Instead, I hope to see college graduates who are either detestable in the lack of direction or keenly aware they need to get out of the house and get their act together.

Tiny Furniture is currently in theatres and OnDemand.