Seth Rogen's This Is The End Fizzles

After a hilarious half hour, Rogen’s film degenerates into stoner humor. 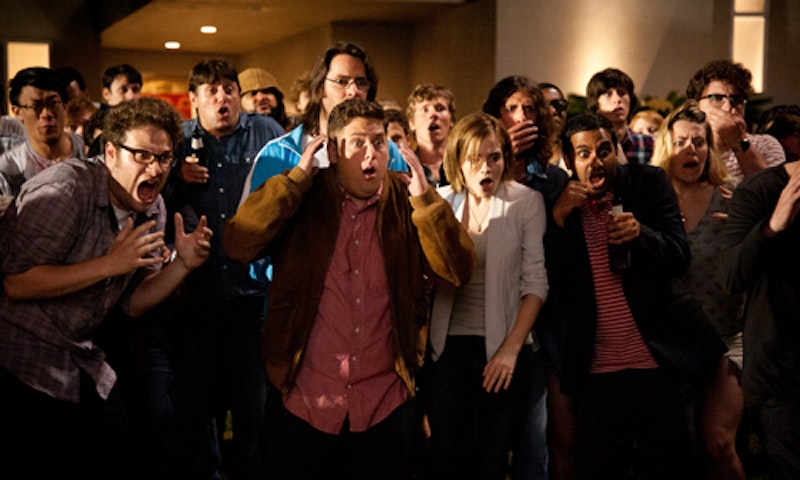 Seth Rogen’s directorial debut This is the End boasts a great premise: a huge party is raging at James Franco’s house in the Hollywood Hills, filled with celebrities, when the apocalypse breaks out. That set-up alone might be one of the best things Rogen and his writing partner Evan Goldberg have ever come up with. A movie packed exclusively with terrified actors playing exaggerated or polar opposite versions of themselves fighting for dear life and coming to terms with seeing a lot of their friends die and their city burn. A movie that takes the piss completely out of itself and everyone involved. This could’ve been far and away their funniest picture yet, solely based on how rich the vein of material is.

This is the End doesn’t fail by any means, and it’s frequently very funny, but it doesn’t bloom or evolve at all from that initial, brilliant seed of an idea. The first 20-30 minutes are completely golden, when most of the cameos are gotten out of the way. Aziz Ansari, Mindy Kaling, Rhianna, Emma Watson, Jason Segel, and Paul Rudd drop in for a line or two, not really given the opportunity to do anything at all. Soon, the end of times is well underway and most of the people at the party are dead, save Franco, Rogen, Jay Baruchel, Craig Robinson, Danny McBride, and Jonah Hill (whose “serious actor” affect is pinched by a line when he’s praying to God to save him—“Dear God, it’s Jonah Hill—from Moneyball”). The movie at this point turns into a band of brothers type deal, and after the initial bloodbath, the apocalypse actually winds down and those messy, patchy shooting the shit improv stretches start filling the gaps, until the end result doesn’t deviate much from where scenes with these guys went in Knocked Up or Superbad or The 40-Year-Old-Virgin.

Instead of a constant stream of actors and actresses doused in flames after they mock themselves, Rogen’s movie settles comfortably into the already well-established and arguably exhausted milieu: stoner humor. It hits and it misses. Even though a selling point is that these are actors playing themselves, how they act and what they say isn’t any different from any other funny similar type movie they’ve already been in. Rather than have wild and crazy fun with such a meta and self-referential premise, it never moves past that initial, excited, and stoned inspiration. They don’t want to play themselves as blown out, cartoony asshole LA actor types, which is a shame, because without a doubt, every single second Michael Cera is on screen is uproariously funny. Cera plays a true degenerate version of his shy nice guy persona, throwing blow in Christopher Mintz-Plasse’s face and getting double-teamed in the bathroom, all while wearing a very Miami Vice windbreaker. When he dies early on—gruesomely, impaled on a telephone pole—the real potential for this movie goes as well. It’s such a tease! Now I need to see a film with this Michael Cera. This is the End is good-hearted but it’s too safe, too comfortable, and doesn’t live up to the promise of its set-up at all.