Dan Harmon Returns To Community... But Why? 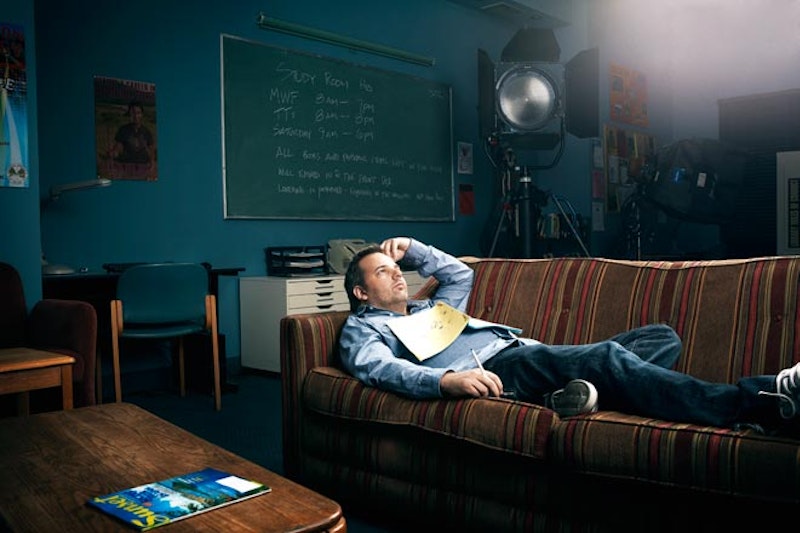 Back at the beginning of June, Dan Harmon announced on Twitter that he'd struck a deal with Sony to return to Community, the offbeat NBC comedy that he'd created and ran for three seasons. Fans, of course, were ecstatic: Community is, and always will be, Harmon's show, and David Guarascio and Moses Port's fairly disastrous fourth season proved that. Still, this may be a television first: unhappy studio execs frequently clash with creative types like Harmon—think of Bryan Fuller at Showtime and the whole Dead Like Me debacle—still, as far as I can tell, no fired show runner has ever been asked to come back before.

Talking with Kim Masters on KCRW's The Business a little less than a year ago, Harmon was practical and understanding:

I would have fired me too. It's a business… Sony's job is to take that shot clock and do whatever they can with it. They're not going to hand the ball to the guy that spent three years losing in the ratings race and not turning a script over until I felt it was finished. If your ratings are high and there’s money being made, you’re allowed to be a perfectionist in television. But if your ratings are low, have a template.

Now that Harmon's been re-hired, however, he's become a bit more typically antagonistic, saying on his most recent Harmontown podcast, for example, that watching season four was like "flipping through Instagram and just watching your girlfriend blow everyone" and "being held down and watching your family get raped on a beach." Such comments, as you might expect, required some apologizing later on, because rape jokes never really go over well apparently, and also because trashing the writing staff of the show you’re about to take back over doesn't really foster much trust, productivity, camaraderie or any of that other good workplace environment stuff.

Why, exactly, Harmon was asked back we may never know. After all, while the ratings for season four were down, so were almost all of NBC's shows, and for a comedy like Community, which has never had much more than a cult following, I can't imagine the ratings really factored at all. Presumably, Sony fired Harmon but kept the show going for a fourth season just to secure potential future syndication (those last 13 episodes put them at 84 total), but then, if that's the whole point, and Guarascio and Port's more "audience-friendly" version didn't succeed in somehow, remarkably, making the show a hit, why not just cancel it and move on?

Honestly, I've never been a fan of Community. I just don't think Harmon's all that funny, and I think the show itself is too much referential parody and pseudo-intellectualism. But it is different, and with all the banal shit that clogs the airwaves season after season, especially on major networks like NBC, anything different is welcome. Another good run here could mean execs put a little more trust in risky idealists like Harmon, and that's never bad.