A tour of the best celebrity and musician appearances in the show's history. (Note to Andrea Bocelli: pick something upbeat next time.) 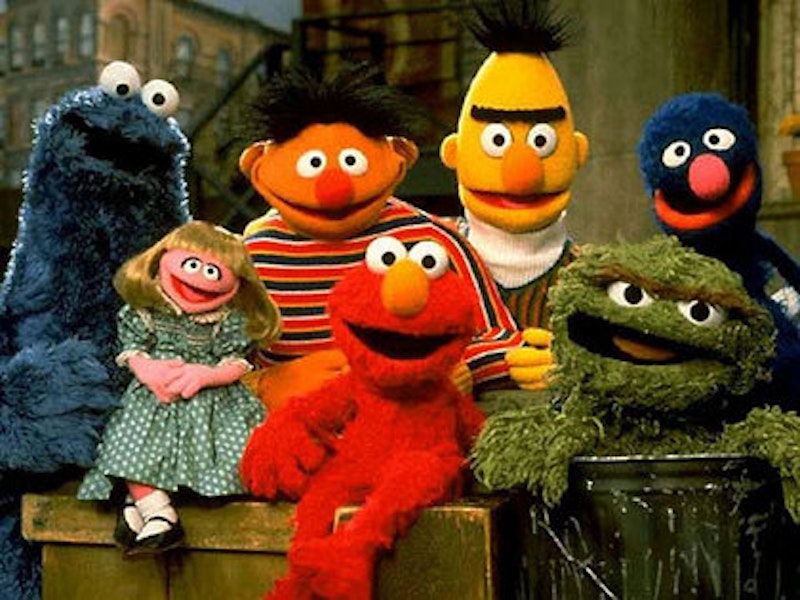 Not too long ago, Splice posted Patti Labelle’s gospel ABC’s and Feist’s cute “1234” performances on Sesame Street. Being well acquainted with the number one video below, I wondered how many other great Sesame Street performances there were out there, after all Sesame Street has been a cultural institution for nearly twice as long as I’ve been alive, and the hundreds of musical guests they’ve had in that time were bound to capture a few magical moments. Or at the very least, evoke some form of capsulated nostalgia.

So, just like last week, I want to take a look at the 10 best Sesame Street musical performances I could dig up on YouTube, as well as the three worst and one really weird one. Oh, and I excluded the Feist performance, because that’s been covered here, there and everywhere.

Every other clip on this list has an artist re-interpreting their song to make sense in the Sesame Street universe, usually for the better—but not here. Stevie does manage to get a Sesame Street mention into the lyrics, but it was wise not to mess with that no-nonsense groove. After all, “Superstition” already offers lot of lessons for youngsters. Like, uh, “wash your face and hands,” the somewhat cryptic “When you believe in things you don’t understand, then you suffer,” and most importantly Stevie Wonder is a badass who does not mess around.


This song seems like it was written for Sesame Street, so the exposition here isn’t exactly innovative. It doesn’t really matter though, because this performance is one big emotional rollercoaster starring a bunch of manic-depressive monsters. Also, I think this is the most enunciating Michael Stipe has ever done; savor this song for no other reason than you can actually understand what he’s saying.

There were a couple Cash performances to choose from, but “Nasty Dan” is the clear winner. What’s not to love about the Man in Black singing to the Man in Trash? Oscar’s interjections can get a little old after awhile, but the first time around, they had me chuckling.

4. Ernie & a bunch of random celebrities


Is “Put Down the Duckie” a heroin metaphor? It sure seems like the wise old (black) owl saxophonist is lecturing Ernie on a horse habit, and the moral is . . . wait till after the gig to get your kicks. If that’s not enough to get you to watch that clip, how about guest turns by Keith Hernandez, Mookie Wilson, Ladysmith Black Mambazo, Paul Simon, Danny Devito and the New York Giants imploring Ernie to “put down the duckie.”


Ray Charles makes the most professional appearance on Sesame Street, but it’s hardly buttoned-up. “It Ain’t Easy Being Green” goes in the opposite direction from most other artist’s re-writes in that it takes the song even more seriously than the original. It works here though, not that anyone ought to expect anything less from Ray.


How could Bo Diddley plus Bo Jackson not be a winning combination? Couldn’t they have had sports Bo do a little bit more though? As much of a pleasure as it is to see him go down a slide, the man was capable of breaking baseball bats over his thigh and running circles around linebackers. Similarly, Diddley’s guitar solo doesn’t exactly capture him in his finest form. Whatever though, I just want one of those silver and black BO jerseys.

I’ve never cared about the Spin Doctors, so maybe this video gets some credit for exceeding expectations, but this version of “Two Princes” is the epitome of 90s fun. The story line might be a bit contrived, but c’mon, it’s a kid’s show and also, that’s probably the dirtiest looking man to ever play a bad guitar solo in Sesame Street. Still, as fun as this video is, lead singer Chris Barron’s scatting is no match for . . .

You’ve got to love the energy Bobby McFerrin brings to this video. It reminds me of the time a girlfriend in high school went to some peace/earth/energy/vocalization retreat with McFerrin somewhere up in the mountains in Vermont. Except instead of mutant birds, there were probably a bunch of hippie women in billowy linen pants using yodeling to access their chi. Or something.

One thing I picked up on putting this together that I hadn’t necessarily noticed before: Sesame Street loves to subtly ridicule its performers. What other explanation is there for having a legendary singer like Tony Bennett sing a song about sending a worm to space called “Slimy to the Moon?” I mean it’s one thing when it’s the Spin Doctors, but this is Tony Bennett we’re talking about. Also, I could swear I once heard Big Bird ask Natalie Portman if she “would like bird seed milkshake all over her face.”

The other day I had to go through a rigorous screening process to get a spot in a Sierra Nevada focus group, and one of the questions was, “If you could invite four people dead or alive to dinner, who would they be?” Malcolm X, George Harrison and my Grandfather on my Dad’s side must have been obvious answers, because my interviewer only wanted to know: “Why Norah Jones as well? Well, she seems like she’d provide the perfect dinner party music for such a momentous occasion, and also, she’s really beautiful.

I know lullabies can have an inherently creepy vibe, but this is too much. Why does he look like he’s about to make out with Elmo? Stop caressing him! Opera singers don’t often translate well to the Sesame Street setting (see Placido Domingo) but how hard is it to avoid looking like a pedophile?

Err, I guess it’s sort of hard, especially when your song is about grown-ups holding kids’ hands. I don’t want to pile on to an already downtrodden band, but look how uncomfortable that kid is whose being touched by the freaky looking blonde dude. Contrast that with the dancing kid who is just freaking out over Stevie Wonder in the video above.

This doesn’t really reflect on Alicia Keys so much as the guy who uploaded this to YouTube with the volume set way too loud. As a result, the audio is so distorted that Keys’ piano sounds like a likembé (a la Konono No. 1). It’s actually kind of awesome now that I’m watching it again. That’s definitely the grimiest bass line Sesame Street’s ever featured.

I wonder if it was in their contract that Ernie had to greet Beyonce first. She even has to sing lead, couldn’t she have handed this less-than-stellar song to Kelly or, the uh, other one? Also, check out Beyonce’s hat. Maybe she didn’t get the first choice in stylists?

There ought to be a rule about no soft rock on Sesame Street, after all we need to get to future discerning music fans while they’re still young.  And for how bad this video (and a few others) is, the vast majority I saw were lighthearted, kid-friendly, genre-diverse introductions to a lot of really great music, and as long as the producers keep booking people like Feist, Sesame Street should keep on influencing young music aficionados for generations to come.