Spike Jonze's Where the Wild Things Are pushes the book's psychoanalytical qualities to the fore. (Grade: B) 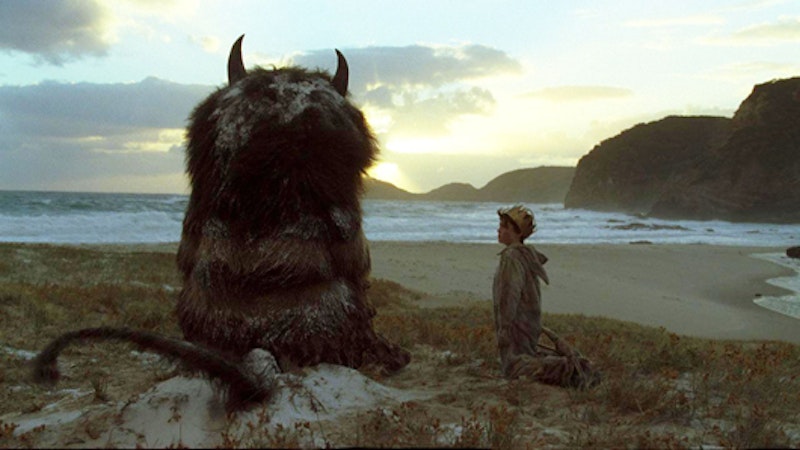 This is the first of two Splice Today articles about the movie version of Where the Wild Things Are. John Lingan's review will run tomorrow.

If Maurice Sendak's best-selling children's book Where the Wild Things Are had been published as it was originally created, it would have been called Where the Wild Horses Are, and 21st-century children and nostalgic adults might have had an altogether different film adaption to deal with. But luckily Sendak's publisher wasn't impressed with his horse drawings and convinced the artist to invent "the wild thing"—a dark, Cheshire-cat like monster that required Jim Henson's puppet-making abilities crossed with Spike Jonze's signature sheen of cool to be translated into cinema. The result is one of the most creative and depressing children's films to date, and like it or not, it's better than a feature-length film about angry ponies.

One reason why the original, nine-sentence-long book remains a hit with readers is the way it confronts complicated childhood emotions. It was even called "one of the very few picture books to make an entirely deliberate, and beautiful, use of the psychoanalytic story of anger." Sendak's own life was one of frustration and loss; most of his relatives were killed during the Holocaust and he was raised in the Warsaw ghetto. He lived his whole life repressing his homosexuality and, to further cement the post-Freudian tilt to his work, his partner was a psychoanalyst. It's no surprise that the new film's screenplay, co-written by Dave Eggers and the director, Spike Jonze (Being John Malkovich), unfolds the emotions of the book into life-size dimensions. Eggers' own works frequently deal with loss (A Heartbreaking Work of Staggering Genius graphically describes his mother's death from cancer) and the capricious, impulsive and occasionally destructive spirit of men (in You Shall Know Our Velocity an entire scene is devoted to two male characters attempting to jump and slide over a car). Mix Sendak's war woes with Eggers' modern-day dilemmas, and nary an iCarly will you find. (As for Jonze, well, he's worked extensively with skateboards...)

Where the Wild Things Are begins firmly rooted in reality, as protagonist Max (Max Records) entertains himself with snow forts and model towns to fill up the time he wishes he were spending with his divorced parents or his suddenly pubescent sister. Records' performance is impressive, like Haley Joel Osment gone bipolar. He can switch from manic happiness to vulnerable anger in one camera transition. His mother, played by Catherine Keener, is tired but kind, lacking the energy to deal with a typical spastic nine-year-old boy. After a fight, which ends with Max biting his mom, he runs away and sails to the land of the wild things.

The rest of the film, except for the final scene, is carried out in the Jonze-engineered land of monsters. CGI took over the facial expressions, physical actors accounted for the body movements, and famous names like James Gandolfini provided the voices. The result is a constructed world, slightly too real and disjointed to join with the ranks of CGI-packed films like Lord of the Rings, but without the makeshift settings that made films like Be Kind Rewind so visually refreshing.

Instead of focusing on visual glitz and glamour, the film instantly dives into psychological dialogue, unfolding the depths of Max's frustration and illustrating his source of catharsis-joyful violence. The land of the wild things is envisioned as a troubled kid's subconscious, a primitive, back-to-nature land where the people in his life are reflected by intimidating, unpredictable creatures. There are definite Jungian themes to Eggers' take on the story; the land presents a blurred opposition of genders and the role of father and son is continually passed back and forth between Max and the main wild thing, Carol. While the breathtaking reality-bending scenes promised in the commercials are disappointingly minimal in the actual film, it is difficult not to be affected by Max's relationships with these complicated creatures.

Where the Wild Things Are's film adaptation certainly had the book's older readers in mind. Jonze has enlisted Arcade Fire and Karen O to gloss and package the film into a then-and-now mishmash of infant nostalgia and grown up sophistication. For those who view the film to look back, the film functions as more than a hollow children's story. But it's hard to know how much of the film's undercurrents will translate to children. There's no doubt that more contrast between Max's real life and his wild thing adventure would have made the plot development more cinema-friendly, but ultimately Where the Wild Things Are affirms that Hollywood is still looking to tell stories for the underdog. In a time when censorship and worried mothers want to hide their children's eyes from the nation's real problems, this story speaks to those who are forced to grow up too fast.