Maurice Sendak, Spike Jonze, and Dave Eggers grapple for tonal control of Where The Wild Things Are, and only Eggers' mopiness emerges unscathed. (Grade: C-) 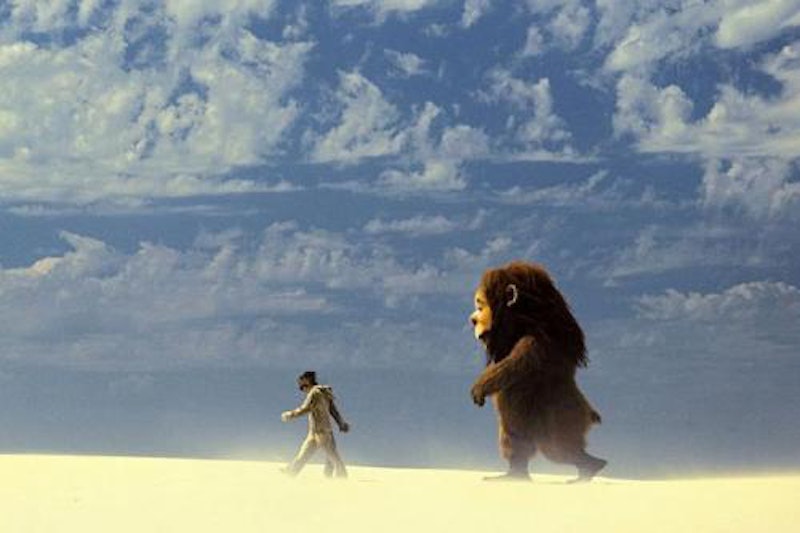 This is the second Splice Today article about Spike Jonze's Where the Wild Things Are. Read Becky Lang's take here.

There is no contemporary director better suited to adapt Where the Wild Things Are than Spike Jonze. His first two films, Being John Malkovich and Adaptation, were so narratively inventive that the bulk of praise was directed toward their writer, Charlie Kaufmann. But Jonze, one of the truly visionary artists to emerge from the music video era, helped realize the cracked beauty of Kaufmann's scripts by matching them with his own stunning visual sense; his films are warm and naturalistic, yet loose enough to allow Kaufmann's surrealist impulses to creep in without overtaking the characters. Jonze's stylistic range and his love of pop nostalgia, both trademarks since his MTV days, are perfectly suited to a beloved staple of children's fantasy.

Pity that Jonze isn't the real auteur of Where the Wild Things Are; that distinction goes to Dave Eggers, who only co-wrote the script but whose never-ending focus on personal tragedy turns this film into a repetitive, navel-gazing mess. The book's simple, universal setup—a child being sent to bed without dinner—is here expanded into a nearly half-hour sequence of overdone youthful loneliness. Max (Max Records) is not just a mischief-maker, but an energetic kid with divorced parents and abandonment issues. Jonze and Eggers change the character from an imaginative scamp to a physically and emotionally abused runaway, and in doing so they weigh down Sendak's perfectly compact, emotionally loaded imagery with more literalization than it needs. Knowing that Max resents his too-cool older sister, or that his mom (Catherine Keener) is struggling financially and has a new boyfriend, doesn't deepen our understanding of why the boy's imagination runs rampant. It's odd that Jonze and Eggers would feel the need to explain such a simple concept at all.

The movie doesn't truly plod until Max reaches the wild things' island, however. He shipwrecks on to a craggy shore and soon enters an autumnal forest—a lovely introduction to the sprawling, ecologically varied setting of the movie's long middle—where he happens upon the group of familiar monsters, who are busy destroying their own thatched houses. They're enduring another temper tantrum by their de facto leader, Carol (voiced by James Gandolfini), and mulling around in the fire-lit dark. And to my great dismay, we soon learn that this is the default setting for these creatures: locked in a perpetual loop of self-pity and hurt feelings, the movie's wild things are, not unlike Dorothy's pals in The Wizard of Oz, literal embodiments of real-life emotions. But their ongoing collective ennui makes no sense in the context of a child's imagination; the whole crew is a mass of anxiety and self-hatred, asking their new king Max if their proposed fort will "keep out all the sadness."

Wild Things settles into a visually impressive rut, repeating the same pair of scenes ad nauseum: Max convinces everyone to have a wild rumpus of some kind, until inevitably one of the monsters gets hurt and they go off to sulk individually. Conversations are had, and each wild thing has some modicum of personality (they're voiced by Catherine O'Hara, Forest Whitaker, Chris Cooper, Paul Dano, and Lauren Ambrose, who do what they can with their emotionally limited dialogue), but there's absolutely no plot to speak of. As the father of a two-year-old, I concur that the happy/sad ebb and flow of these characters' emotions is a somewhat accurate depiction of a child's demeanor, but neither the movie's happiness nor its sadness are convincing. At any given moment, the creatures are either running around, hooting and hollering, or enduring a manic episode where every relationship seems impossible and cruel. It's peculiar for Eggers and Jonze to deny these childlike creations any degree of real whimsy, replacing it with dread and neuroses. The resulting film is like Synechdoche, New York for children—art-directed to death, but ultimately morose and boring.

I can't help but blame Eggers for this, since the movie reeks of his tired preoccupation with loss and grief. There's simply too much numb emoting in Where the Wild Things Are, too much adolescent disaffection and overbearing platitudes about the difficulties of getting on with life. The book remains simultaneously obtuse and visceral; the images are so specific, yet their resonance is universal. All the filmmakers do is fill in the fascinating white space in Sendak's vision, and their additions—a pair of puppet owls, and Max's overly painful home life—aren't even particularly creative. Jonze of course can't help but indulge his considerable visual skill, so there are two beautiful set pieces surrounding a miniature forest built by Carol and the gigantic wooden fort that the group builds together, but the film also looks bleak and washed-out for much of its run time. The few bright, surreal desert scenes are gorgeous, but the forest sequences are impenetrable and muddy.

I'd love to compare Where the Wild Things Are to Robert Altman's Popeye, another visually incredible but tonally incoherent adaptation of a beloved cartoon, but Jonze's movie has none of Altman's social satire and goofy charm. Once the initial shock of the giant puppets wears off (and really, are they any more impressive than Snuffleupagus or Big Bird?), there are no more tricks up the filmmakers' sleeves. The music, by Karen O and a host of indie rock guests, is similarly two-toned—pounding and drum-heavy during the excited moments, wan and plaintive during the mopey ones.

Jonze seemed like the right guy to upend and transcend children's-movie conventions, particularly with Sendak's dark and still-brilliant material to work with. It's an opportunity that Altman missed, partly because his subject was a depression-era adult comic strip, and partly because he never once exhibited the desire to entertain children in the first place. But Where the Wild Things Are isn't the grand, failed, personal experiment that Popeye was, and additionally it has none of the wonder or adventure of E.T. Much as it still amazes me to say, the gratuitously sentimental suits at Disney have done more than anyone this year to advance children's entertainment. Up is still the boldest, bravest kid's movie of the year.