Who Says Hollywood is Youth-Obsessed? 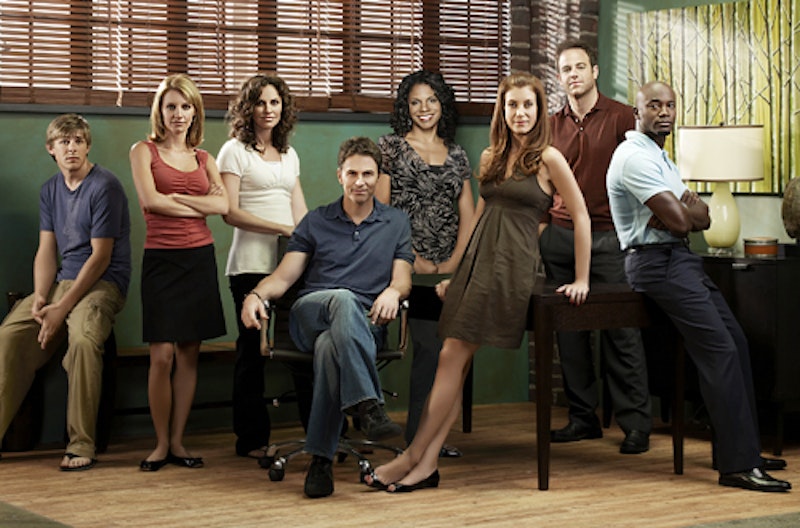 Everyone says it: Hollywood is obsessed with youth. Movies are made for young people. Television shows are geared towards young people. The conventional wisdom says that young people don't like to watch old people.

Consider this exchange between two twentysomething sorority sisters from a recent episode of Greek:

Becka: The pledges stayed in for mud-masks and a TV series about old people having old people sex.
Casey: They're watching Private Practice?

Burn! Yes, the star of Private Practice is, in fact, older than these characters; Kate Walsh turns 43 this week. But that's not the whole story. While the younger, hotter Grey's Anatomy is still ABC's strongest scripted show, Private Practice is more than pulling its own. Grey's premiere was down this year from last, but Private's was way up. And, hey, sorority girls love it!

My point: it's time to bury the old narrative that Hollywood is only in love with the young. Older actors are actually quite appealing, even stronger draws than their riper peers.

Take ABC's top shows in viewers 18 to 49 right now, according to TVbytheNumbers. They are, starting from the best: Grey's Anatomy, Desperate Housewives, Private Practice, Cougar Town, Modern Family, FlashForward, and Brothers and Sisters. What do all those shows have in common? They all feature stars who are near or over 40. Even Grey's, where I assume Meredith is supposed to be well under 40 even though Ellen Pompeo is actually 39, most of the characters, especially the male ones, are "of a certain age." The other shows are even more explicitly about characters who have matured and are dealing with life problems specific to their age groups.

Is ABC an exception? I don't think so. Fox's top show this fall is House, starring Hugh Laurie, who is admittedly aging well. Glee, its "young people" show, is sixth. NBC's top draw is The Office (Steve Carrel is 47). CBS is a bit of an exemption: The Big Bang Theory is its top show in the 18 to 49 demographic, but it's next youngest show, How I Met Your Mother, is ninth.

Need more evidence? The beleaguered NBC looked to 59-year-old Jay Leno this year to save its 10 p.m. slot. So far, while Leno hasn't maintained the magnitude of his stunning premiere, the ratings are good enough overall and popular enough among younger viewers for the network to stick with it.

Meanwhile, youth-oriented network the CW isn't really competing with the big four. Despite peppering its lineup with bright young things, most of its ratings are closer to that of a cable network, and not a terribly successful one at that, like USA. Well-marketed new shows like Melrose Place and The Beautiful Life—created by Ashton Kutcher and starring a kid from High School Musical no less!—are either cancelled or about to be.

What about film? Film is different and a bit more complicated. This is in part because genre matters a little bit more in film. Special effects make more money, no matter who the star is, and movies aimed at families also rake in the dough. Still, evidence suggests even the big screen is good to the old.

The top actors and actresses in Hollywood are mostly over 40. Forbes has the top actors as: Brad Pitt (45), Will Smith (41), Adam Sandler (45), Harrison Ford (67), and Tom Cruise (47). Women have it rougher in Hollywood, but not by much. Forbes calculated the actresses that offer the most bang for the buck and the average age of the top 10 came in at a healthy 38. Not grandmothers, but not ingénues either. The top actress, Naomi Watts, is 41. One need only look to Sex and the City, the highest grossing chick flick of 2008 and potentially 2010, and Sandra Bullock's The Proposal, this year's highest grossing chick flick, to see that, actually, older actresses have strong appeal.

This argument isn't seamless. After all, I'm not really looking at reality television, whose ratings skew younger and tend to be higher. American Idol still owns television, and that show blatantly denies older people the right to compete. Still, scripted television is a bigger investment than reality, so it's important to see what networks invest in, and it isn't necessarily younger actors.

Why is older better? In my opinion, the lives of the over-40 set are just more interesting. At a certain age, life's problems have increased emotional weight: career changes are more dramatic. As the dating pool dries up, relationship troubles take on heightened intensity. Women must contend with the biological clock, and health problems are more likely to occur for everyone. At the same time, characters are at the top of their game professionally, meaning they can own fabulous houses and wear better clothes. This pretty much covers 75 percent of all TV and film drama points. Rich or upper middle class characters break up, get back together, have kids, get cancer and switch jobs. It's much more interesting (and realistic) to see a 45-year-old do all that than someone who's 25. The stakes are higher. The problems of the average 20-year-old seem small by comparison. This makes sense; twentysomethings are rosy and optimistic, polls show. Well, rosy and optimistic isn't very interesting to watch!

So the next time you see a promo for Gossip Girl and roll your eyes at our culture's "youth obsession," remember that in a year or two those actors will be jobless (sadly; Gossip Girl is awesome), but the sassy mommies of Desperate Housewives will still be going strong.