RRR is the most exhilarating and unique action-adventure movie in recent memory. 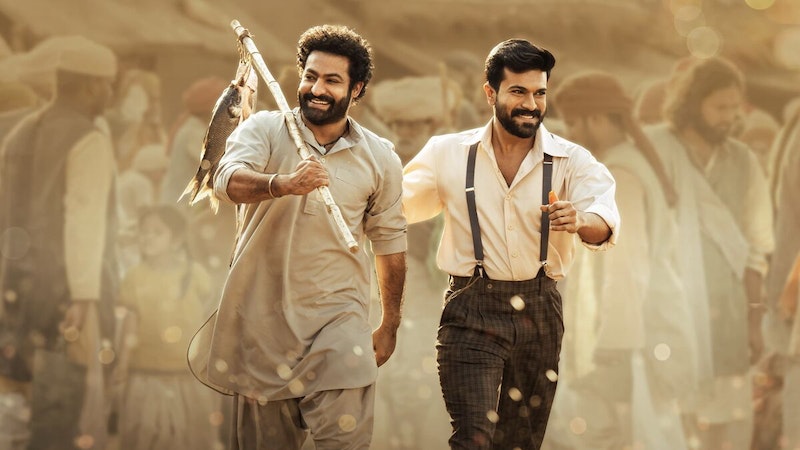 The most exhilarating and unique action-adventure movie in recent memory is three hours long, comes from India, is set in 1920, and has spent the last several months toggling between theaters and Netflix.

The film is called RRR, directed by Indian auteur S. S. Rajamouli, and tells a wild story of friendship, adventure, and colonialism in early-20th century India. RRR—it stands for "Rise Roar Revolt" in Hindi— has everything: about a half-dozen heart-stopping action sequences, the liberal use of tigers and other animals, multiple musical numbers and most impressive of all, the storytelling wherewithal to perfectly execute setups and payoffs.

Made in the Telugu language, as part of Tollywood—not to be confused with Bollywood, and based in the Southern part of India—RRR tells a fictional story about two real-life historical figures, Rama Raju and Bheem, who never actually met. But the film pretends they did, and got into elaborate adventures together, in which they appear to express superhuman strength.

RRR begins with an mustache-twirling British governor (Ray Stevenson) kidnapping a young girl from the Gond tribe in rural India and taking her back to Delhi. Bheem (N. T. Rama Rao Jr.), a member of her tribe, vows to organize her safe return, and goes on a mission to do so. He soon runs into Raju (Ram Charan), who's working as a policeman for the British raj, while having a secret plan of his own. The two men become fast friends—during a delightful sequence they rescue a young boy from a fire with the help of a horse, a motorcycle, and some rope—and form an alliance, even though they're both hiding what they're really doing.

There are amazing sequences, including an assault on a palace involving tigers, a forest battle involving flaming bows and arrows, and a mid-film song-and-dance number that comes out of nowhere. The film is also violent, and probably features the most English soldiers killed on screen than any movie since Braveheart.

Beyond that, the music is terrific, and the English subtitles are hilarious. One repeated song appears to describe the plot of the movie, in the tradition of Smokey and the Bandit, including the phrase "It's yet to be seen if this will end in bloodshed" (one time, we see that while the two heroes are frolicking; later, we see it in a scene where both characters are clearly bleeding).

RRR has had something of an unusual release strategy, at least in the U.S. It got a standard theatrical release in the early spring, and word of mouth grew slowly, well beyond Indian-Americans and others who seek out that country's cinema. The film was released to Netflix in late-May, albeit dubbed in Hindi rather than its original language of Telugu. But on June 1, it got a one-night-only theatrical re-release. My familiarity with this director, and the cinema of India in general, was minimal up until now, but RRR made me want to seek out more of it.

Rajamouli has been asked if he’d ever make a Marvel movie. While I resent the notion that all other movies, even the best of them, are mere practice for the "real movies" of the MCU, Rajamouli has no need to do that—he's already made a movie about men with superpowers.