Top Gun: Maverick is a safe and wimpy “legacyquel” only made to shore up the brand of Tom Cruise. 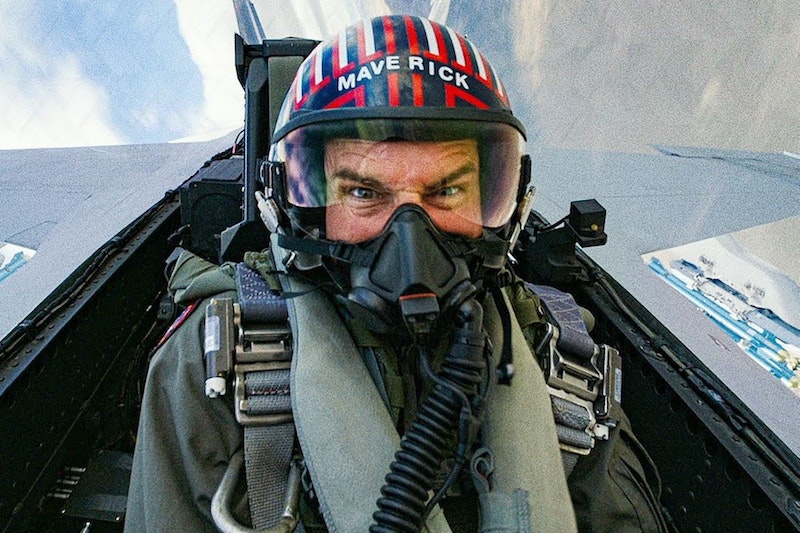 “How does he keep surviving all of these crashes?” The young girl sitting behind me at Top Gun: Maverick last Sunday had the right idea, even as her father tried in vain to explain to her the mythos of the 1986 Tony Scott original. As the movie started, he was pointing about the different planes, going through Mach speeds, dealing who exactly “Goose” and “Iceman” were—before she cut him off cold as the opening credits ended with, “You talk too much.”

But how does Tom Cruise keep surviving all of these crashes? Nearly 60, he’s received his best press in decades, a near 180 from the cracked and grim days of Oprah’s couch and whether or not Matt Lauer was “being glib” about psychiatry. Steven Spielberg wasn’t happy about that infamous Today Show interview, which was ostensibly a promotional stop for the 2005 War of the Worlds remake. That movie, one of Spielberg’s best and the only moving and enduring 9/11 allegory thus far made, was obscured and forgotten because of Cruise’s public freak-outs and a non-stop attempt to make his beloved Church of Scientology look as bad as possible. Look at Elisabeth Moss—she’s a model member!

Sixteen years have passed since Sumner Redstone fired Cruise from Paramount and banned him from the lot because of his public behavior. Since then, “the last movie star” hasn’t tried anything new: for every six or seven action movies, there’s a cameo like Tropic Thunder (the beginning of his post-couch rehabilitation), or relatively smaller but safe movies like American Made. In the thick of blowjobs from the entertainment press on both coasts and too many people on Twitter, it’s important to remember that Christian Bale based his characterization of Patrick Bateman in American Psycho on Tom Cruise. He’s a movie star made of porcelain, not stone like Brad Pitt. Like Will Smith, he’s one “slap” away from destroying his image and his career forever. The couch wasn’t as extreme as the slap, and it’s been a generation. It’s time to make money.

Top Gun: Maverick is doing great business, and that’s all that matters. It was made in 2018 and scheduled for release in 2019; after being pushed into 2020, Cruise wisely decided to hold the movie, unlike Christopher Nolan and his Tenet, which wouldn’t have brought people back to theaters anyway. Maverick is as straightforward as the original film, and just as vacuous and with a remarkably similar bad habit of coming up just short: does a blurry close-up and a profile medium shot of Jennifer Connelly lying down on a bed fully clothed count as a sex scene? Why were close-ups of Jon Hamm and Charles Parnell backlit and under-lit to the point that Hamm’s face was chiaroscuro and Parnell’s was indecipherable? Who exactly are we fighting in this sequel? The Cold War is over, and post-9/11 exploitation war films set in the Middle East have long since passed. We all know the enemy is within, whether it’s on the right or the left (or straight on up), but the movies can’t face that yet.

The enemy in Top Gun: Maverick remains unnamed, and as Cruise’s Maverick and his various other super-powered trainees fly behind him, the enemy fighter pilots zip by and, in close-up, we can see only their opaque black helmets. No flags, no insignias, no abbreviations—just another non-player character, a stock piece in a movie proudly full of real aerial footage. Kosinski’s direction of the flight scenes is good, though not as artful as Scott’s, but he really becomes beige whenever people are talking together in a room. The bar scenes are fine, but where’s the atmosphere of the first movie? There were neon pink lights in a submarine in 1986, yet Kosinski can’t even smoke out the set to give it some atmosphere and prevent the movie from feeling so inexplicably empty?

Miles Teller surprises with his best performance yet (in other words, tolerable) as “Rooster,” the son of Anthony Edwards’ Goose, Cruise’s dead wingman from the first movie. The way this movie is made and has positioned itself highlights the meta-element of Cruise, and all of his fans, getting older. But Top Gun: Maverick plays it safe all the way through, suggesting near the end that Maverick might’ve died, only to have Rooster, another near-victim, save him. They both survive, everyone survives. Cruise watched those under-lit dialogue scenes over and over, and he did nothing—yet he insisted that the new recruits reshoot the shirtless volleyball scene after two hard weeks in the gym. Top Gun: Maverick is a husk with some decent flying sequences and a serviceable performance from Cruise, who appears committed to keeping up the ruse of his career and his life going for as long as possible. I’m sure “the slap” shook him; he knows he’s just one move like that away from losing himself forever.