Crimes of the Future is a dull, dead slog that hardly lives up to Cronenberg’s hype. 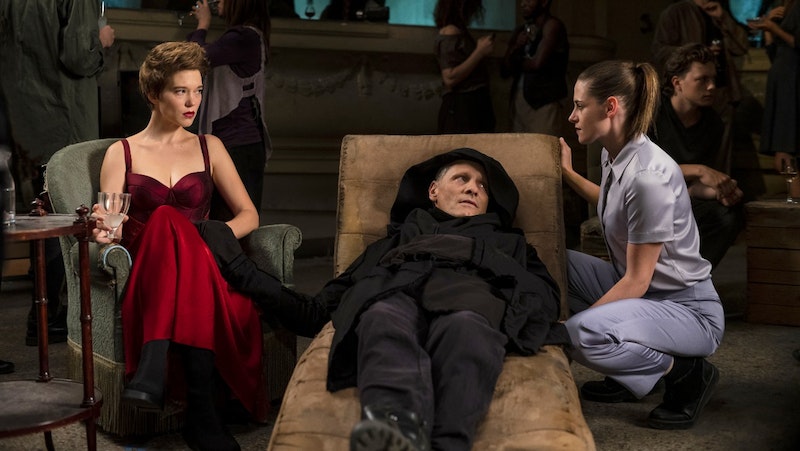 When David Cronenberg’s Crimes of the Future was announced last year, the director insisted, “The last 15 to 20 minutes are going to be a tough sit for a lot of people,” using a cliché nearly as bad as “a tough ask.” When the title was announced, most people assumed it would be a remake of Cronenberg’s film of the same name from 1970, where a plague has wiped out all human women who can reproduce, leading a group of psycho scientists to kidnap a little girl and induce puberty in her in order to repopulate the Earth. It ends with the little girl smiling into the camera as the scientists die of the same plague that’s taken everyone else away foaming at the mouth. Although Crimes of the Future ’22 isn’t a remake, it does feel like an echo of that early experimental film—for better and worse.

Viggo Mortensen and Leá Seydoux play performance artists with a particularly unique skillset: he grows organs previously unknown to mankind, and she documents and presents them. They’re introduced as a longtime couple, and when she spoon-feeds him or cuts him or licks the zipper in his stomach, there’s the same familiar tenderness of a married couple embracing, long love mixed with exhaustion—nothing grotesque. That’s the movie’s greatest achievement: making Mortensen and Seydoux into the most lovable “old couple” of organ harvesting, body modification, and “the new sex”: surgery.

Kristen Stewart’s character tells Mortensen early on that, “surgery is the new sex,” and as Mortensen and Seydoux sink deeper and deeper into the hands of a covert government organ operation run in part by Stewart and Scott Speedman, people start dying and assassinated. But why? Cronenberg’s script is curiously opaque and plodding, with a confusing and under-developed plot full of dead-ends and unclear motivations: who’s the guy getting double-drilled in the head at the end? Why? What’s the significance of the tattooed organs they find during the autopsy of the young boy murdered in the first scene? (I’m assuming that’s what Cronenberg meant by a “tough sit”—again, it’s not a remake of the 1970 film.)

So much of this—the tattooed organs, the boy and his parents, motivations and alliances and consequences for Mortensen and Seydoux—comes out like mumbo jumbo and never congeals or makes any kind of emotional sense. I understand the purple plastic candy bars (even if they look like regular Hershey’s to me…) because it’s explained at the end, as Mortensen eats his first piece of plastic and finally feels “real”—okay, but why? What’s going on with this guy, why is he like this, how did they meet, and what did the little boy and the government ops have to do with anything? So surgery is the new sex—that’s a good tagline for a movie poster, and a good line, but Crimes of the Future is anything but surgical. It’s one of Cronenberg’s most messy and sloppy films, full of bad lighting and leaden with so few compelling images and so much dead time.

Cronenberg’s an advocate for shooting digitally, but he made his best work using 35mm camera systems, so he knows how to properly light a scene. Look at any of his better films: Videodrome, eXiztenZ, Dead Ringers, Crash, and later, more realist work like A History of Violence and Eastern Promises. Crimes of the Future is being written about like some invigorating “return to form,” “one for the fans,” “a career summation”—give me a break. Cronenberg does mashup various elements of the aforementioned films, but it’s all so muddled and delivered so limply and without any of their energy, mystery, or color. Crimes of the Future is an ugly movie, not because of its subject matter, or even its color palette, but it’s so under-lit, bare and bland that it just feels dead. Maps to the Stars was more surreal and grotesque than this.