Crush is a funny, charming teen romantic comedy with a decent hook and a likable cast. 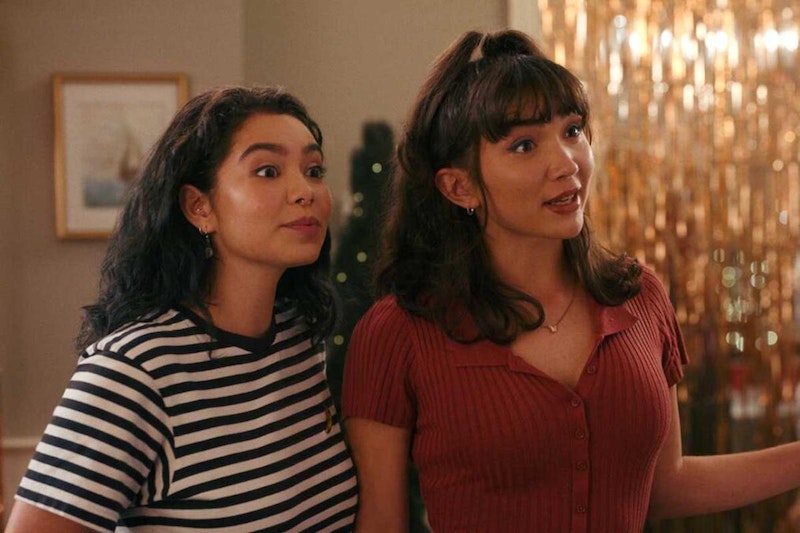 People who have a conniption when they hear kids in school are learning about homosexuality really aren't going to like Crush, a new Hulu movie set in a high school in which being gay is the furthest thing in the world from controversial. And wait until they hear that both sides of movie's central lesbian teen romance are played by former Disney stars. Crush is a funny, charming teen romantic comedy with a decent hook and a likable cast. Is it "woke"? Perhaps. But Crush is a teen movie, not a lecture.

Directed by Sammi Davis, and written by Kirsten King Casey Rackham, Crush is the latest Hulu film from the production outfit American High, which also was behind Plan B, Sex Appeal, Big Time Adolescence and other films that’ve landed on that streaming service. These have been appealing teen movies, usually some degree of female-centered and queer-friendly-namely, putting out better versions of what Olivia Wilde's Booksmart was trying to do in 2019.

Crush does recycle one of the better ideas from Booksmart: Rowan Blanchard's Paige is comfortable in her sexual identity and accepted by those around her, but she hasn't figured out the part about dating girls. Paige, an artistically-inclined high school senior, has been out as gay since a young age, but remains shy and unsure of herself. She lives with her mom (Megan Mullally), who's so accepting of her daughter's sexuality that she never stops talking about it in increasingly embarrassing ways. She also has a straight male best friend, who's running for class president against his girlfriend in a competitive election that appears to serve as their kink (it's a parody, I'm convinced, of the marriage dynamics of George and Kellyanne Conway).

Through a convoluted series of machinations, Paige joins the school's track and field team, which lands her in a love triangle with a pair of twin sisters: Paige's longtime crush Gabriella (Isabella Ferreira) and AJ (Auli'i Cravalho.) The chemistry is greater with the latter, and things go in about the direction you might expect. Rowan Blanchard starred in Girl Meets World, the Disney Channel reboot of the sitcom Boy Meets World, while Auli'i Cravalho is best known as the voice of the title character in Moana.

Not everything works. Paige looks and dresses very much like a popular girl, not an artsy outcast, which was also the case with the heroine of Sex Appeal. A subplot about the identity of a high school graffiti vandal is silly, especially if you remember the great direction the Netflix show American Vandal took that same concept. And the movie features perhaps the only high school track meet I've ever heard of where there's a professional television broadcast. But what really stands out is how much things have changed, and how a fictional high school in which all sexualities are accepted and treated matter-of-factly.

There was an SNL sketch from 1992 called "Sex and Peer Pressure at Valley High," where everyone in a high school is upfront about gay sex, including the parents. What was depicted at the time as liberal overreach is now played straight. It’s quite a concept, in the era of “Don’t Say Gay.”