On the Roof, On the Screen

Fiddler's Journey to the Big Screen is a worthwhile exploration of the 1971 film version of Fiddler on the Roof and its place in the history of the musical. 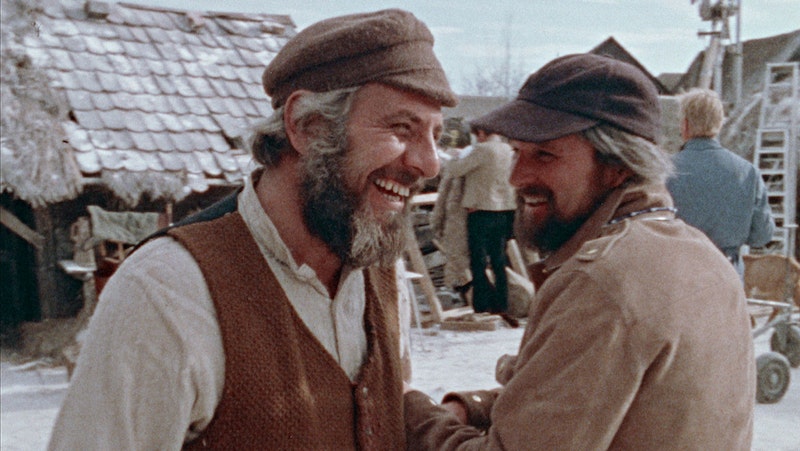 In 2019, there was a documentary called Fiddler: A Miracle of Miracles, which told the story of how the musical that debuted on Broadway in 1964 has become one of the most important theatrical works in history, one that despite its cultural specificity, is loved and appreciated all over the world.

Now, less than three years later, there’s another documentary about Fiddler, called Fiddler's Journey to the Big Screen. As the title makes clear, this doc, directed by Daniel Raim and narrated by Jeff Goldblum, focuses on the 1971 movie adaptation, on how it came together and has endured. Documentaries about one specific film can be tricky, but this one’s worthwhile, mostly because it has so many aspects to explore.

The film features interviews with most of the living principals, including three men—director Norman Jewison, lyricist Sheldon Harnick, and composer John Williams—who are in their 90s. The 98-year-old Harnick, in probably the film's best moment, belts out "Sunrise, Sunset" in full. There’s also some welcome context about the world Fiddler came into. It establishes that in the years between the release of The Sound of Music in 1965 and Fiddler in 1971, a lot of movie musicals were terrible, either because the filmmakers cast movie stars who couldn't sing, or Broadway actors with no screen presence. This leads into the filmmakers' controversial decision to cast Chaim Topol, and not the role's on-stage originator Zero Mostel, as Tevye the Dairyman.

The film contains at least the third time I've seen Jewison tell the story about being offered the job of directing Fiddler and having to tell the studio heads that, despite his surname, he's not Jewish. Jewison, subject of a pretty good biography last year, is something of a lifelong philo-Semite, but he’s a Canadian Protestant, and his film after Fiddler was the movie adaptation of Jesus Christ Superstar.

We also hear from all three of the actresses who played Tevye's daughters, Rosalind Harris, Michele Marsh, and Neva Small. Harris tells the story, in keeping with the thrust of last year's movie Licorice Pizza, about how she was ashamed of her big nose until, in the early-1970s, Barbra Streisand made it fashionable for Jewish women to be sex symbols.

The Miracle of Miracles documentary ended by stating that at least one performance of Fiddler on the Roof had been performed somewhere in the world, every day, since the musical's Broadway debut in 1964. I later investigated and found that assertion probably not true, but likely close to true. The streak was ended when the pandemic closed theaters two years ago, but the show has since returned; I recently saw a production at the Philadelphia Orchestra with Tony winner Chuck Cooper playing Tevye. But a major piece of Fiddler's legacy is the 1971 film, and the new documentary is a worthwhile exploration of its piece in history.