The Unbearable Weight of Massive Talent is a missed opportunity to explore super-fandom and obsession. 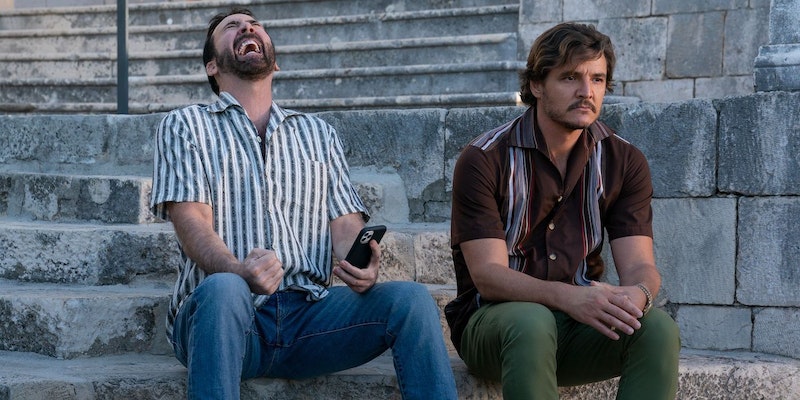 There could be worse “meme actors” than Nicolas Cage. Much worse: Chuck Norris wasn’t working a lot when Conan O’Brien made him a running joke on Late Night in 2004; Abe Vigoda’s career was ultimately overshadowed by another running joke about people running premature obituaries on him; and Tom Waits blemishes and often ruins every movie he appears in, most recently Licorice Pizza. His unbearable hammy growl in the bar with Sean Penn and Alana Haim is the moment the movie loses most of its momentum. And yet certain filmmakers think they can sprinkle him in and get a good, easy, and fun cameo. No. Ban him from films.

Besides, Nicolas Cage is actually an actor, and prolific at that: he’s only gotten busier as he approaches 60, with at least half a dozen movies out every year. He’s not one of my favorites, but the work’s undeniable, even in flawed movies like Pig and The Weather Man. He doesn’t deserve to be a joke, and absent any money issues (entirely possible), it seems his steady work schedule isn’t just obsession but a real desire to overcome a somewhat silly reputation. In the second half of the 2000s, Cage gave a number of bizarre and enthralling performances in otherwise bad movies that have endured in infamy, namely The Wicker Man remake from 2006. Besides cold-clocking a woman without saying a word, Cage’s “NOT THE BEES!” line secured the movie’s cult legacy almost immediately, he continued to go over the top in high concept movies like Knowing.

But it’s been long enough and Cage has made enough movies since that show he’s not coasting and cashing checks to pay for a house or a drug habit. He won the Best Actor Oscar for Leaving Las Vegas in 1997, worked with dozens of legends and brilliant artists, and can still command top billing four decades into his career. The Unbearable Weight of Massive Talent follows a string of slightly self-reflexive and meta-textual movies like Everything Everywhere All At Once, Licorice Pizza, Studio 666, Scream 5, and The Bubble; it stars Cage as himself, but down on his luck and in desperate need of money. The film opens with a kidnapping set to the ending of Leaving Las Vegas—and then the actor having a business lunch with David Gordon Green (who directed Cage in 2013’s Joe, another underrated film), and after Cage raves about Green’s script, he asks if he can read for him. “You don’t have to read for me. You know that,” he says. “I know, I know, but—” As Green is getting in his car, Cage launches into a typically adrenalized delivery of a filthy monologue, shocking the valets. “Holy shit,” Green says. Roll opening credits.

Co-written by Tom Gormican and Kevin Etten and directed by Gormican, The Unbearable Weight of Massive Talent has a great setup: dispirited and broke, Cage retires from acting and tells his agent (Neil Patrick Harris) to accept an offer that he initially rejected: for $1 million, he has to hang out with Javi Guttierez (Pedro Pascal) and appear at his birthday party in Mallorca, Spain. Javi is a super-fan: enormously wealthy and free to indulge his “Nick Cage” obsession, including a room full of memorabilia, props, and weapons from Cage’s films. He even has a wax replica that the actor calls “grotesque” and “disturbing” before offering to buy it for $20,000. Javi sighs and tells him no—he’s not for sale.

In Javi’s Cage room, there’s stuff from The Rock, Mandy, Face/Off, Con Air, and many others. They go over it briefly, but unfortunately, this is about as deep into the mirror as this movie looks. I suppose you could say the film’s abrupt turn into a cartel vs. CIA kidnapping thriller resembles 2002’s Adaptation, but it was a lame trick in that movie and it’s a drag here, too. Tiffany Haddish and Ike Barinholtz show up as soon as Cage lands in Spain, and that kidnapped girl watching Leaving Las Vegas is now his, and the movie’s, new mission. What could’ve been a deliriously fun look into the funhouse mirror of pop culture, fandom, obsession, and Cage’s work, is mostly a mediocre action movie with perfunctory notes and beats that are frankly above the actor and most of the work he’s been doing lately.

I saw The Unbearable Weight of Massive Talent in a packed theater, and it was remarkable how little everyone laughed. There were a couple of moments: Javi tells Cage his three favorite movies are Face/Off, The Cabinet of Dr. Caligari, and… he spends hours stalling. Finally he admits number three: Paddington 2. “I cried through the whole thing and it made me want to be a better man.” Cage is convinced when they both watch it in tears. Later, Cage mentions that he met his ex-wife (Sharon Horgan) when she was a makeup consultant on Captain Corelli’s Mandolin (“Very beautiful film,” Javi says. “Thank you, I know, I think it’s underrated”), and while that got me, someone else was tickled by the off-hand reference to Guarding Tess. That’s what this movie should’ve been, the kind of comedy that Javi puts down at one point: “No one likes comedies of people just talking! It’s boring!” Cage concurs: “You need a hook to get people into the theater.”

Gormican and Etten took this advice too far: they’re clearly super-fans, and when they’re pointing the camera at the real world and the cultural memory, the movie’s really fun and inevitably melancholic. References to an actor’s films over decades reminds us how much time has passed in our lives and creates a dynamic that’s really powerful and woefully underused by American filmmakers. Gormican and Etten can’t write or direct an action movie like Michael Bay, Martin Scorsese, or John Woo, and they shouldn’t have tried. Nicolas Cage is the hook here: what better way to explore super-fandom and obsession than with a “meme actor” who’s actually good? I’m not suggesting something as arch as Adaptation, but simply more of the exchanges, conversations, and references people make to all of these films Cage has appeared in that have appeared in our lives as well.

The movie runs 107 minutes, and Lionsgate reportedly insisted on cutting a long black and white action sequence that incorporated elements of Face/Off, Con Air, and others. Mediating between them and Gormican, Cage sat through the movie (against his will: “I’ll be at the premiere, but I won’t be in the audience.”). He’s said that being Nicolas Cage is “enough,” and all workaholics are trying to outrun death. Cage’s fictional daughter tells him how selfish he is, how everything in her and her mom’s life revolves around him, his favorite things, and his work. A younger, CGI de-aged Cage named “Nicky” appears occasionally, dressed in a leather jacket and a t-shirt reading “WILD AT HEART”—just in case you didn’t catch the reference. For such fans, Gormican and Etten only scratch the surface of Cage’s ineffable qualities and talents, and The Unbearable Weight of Massive Talent doesn’t collapse but deflates as the funhouse closes and we’re back to business as usual: car chases, gun fights, and emotional reconciliations that mean nothing to the audience. National Treasure does.