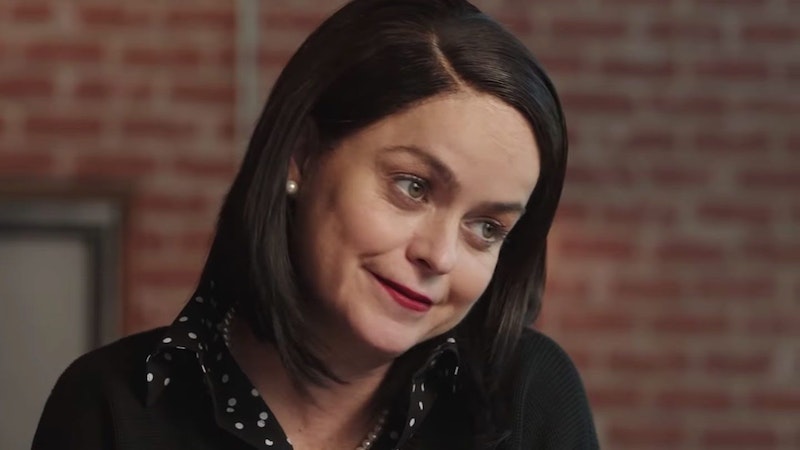 If you were wondering what Jordan Peele's Get Out would’ve been like if it hadn't included any cinematic mastery or storytelling subtlety—and if it had been unambiguous from the first minute that the girlfriend’s parents were evil and murderous racists—it might’ve looked something like the new satirical thriller Karen. The film tries to capture a very specific cultural moment, but it whiffs. The acting is bad and the dialogue is even worse, but the biggest problem is that the film is laughably on the nose—it goes to the most obvious place possible every single time.

Karen, directed by Coke Daniels, is a BET Original Movie, although it's being released theatrically and on VOD this Friday. Taryn Manning stars as the titular neighborhood villain, who’s named Karen, and is a Karen. And if you think that's hilarious, the movie does too. Does Karen complain to the restaurant manager? Yes. Does she cry on command? Yes. Does she call the cops at the drop of a hat? Yes. Does she get caught yelling something racist on a viral video? Yes.

The "Karen" trope has been around for a little over a year, indicating that this movie was produced very quickly. Karen is a busybody racist—the head of the homeowner’s association—who flies off the handle when an upwardly mobile Black couple (Cory Hardrict and Jasmine Burke) moves into her tony neighborhood. She takes turns ingratiating herself with them, undermining them, dropping nasty comments, implying that she wants to seduce the husband, and eventually much worse. In this, she's assisted by her cop brother, a fellow racist who's only slightly less cartoonishly bloodthirsty than Detective Crashmore from I Think You Should Leave with Tim Robinson.

I’d thought that part of the Karen discourse was that many Karens were women who see themselves as bright liberals, until their hidden racial prejudice comes out in moments of weakness. That's not this Karen, who might as well be wearing a Klan robe. Then again, the one scene that fills in Karen's backstory is so out-there, and so quickly glossed over, that it crosses the line into offensiveness.

Karen is most valuable for its unintentional hilarity, from Manning's mugging-filled performance to some of the "surprises." I practically guffawed when the civil rights lawyer character, clearly based on Benjamin Crump, referred to a group of cops who constantly go to bat for each other and cover up misconduct as a "secret society." I didn't realize police unions were a secret.

Many filmmakers in the last few years—and not only Jordan Peele—have found ways to make movies about race and racism that are full of creativity and artistry. When Peele, in Get Out, made the Obama-loving white liberal parents the villains, that was not only shocking, but was a choice that hit a nerve.

There's nothing close to that in Karen.