Pierce Brosnan Will Cut You If He Has To

The November Man is exactly what you think it is. 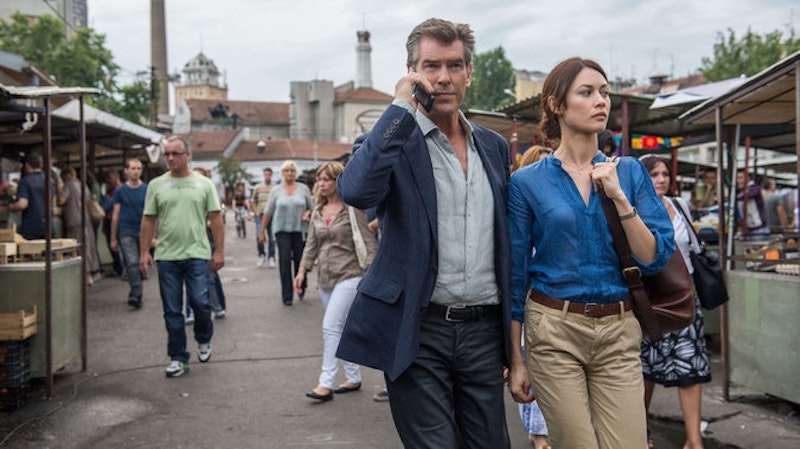 Anyone unduly cynical about the present state of the international espionage flick genre—post-­Bourne—should probably steer clear of The November Man. Fluid sips of surround-sound surveillance! Long ago Russian black-bag operations! Meddling reporters! A decorated, retired agent corralled into service for “one last job”! Folded wads of cash exchanged hand-to-hand! Brutally physical fight scenes! Panic on the cobbled streets of Belgrade! Blood pooling in second-story flats! Plot holes you could fly a 747 through!

Director Roger Donaldson, working from an adaptation of Bill Grainger’s novel of the same name, thumbs that playbook faithfully: thugs with earpieces, weird father-son dynamics between agents, late-model autos blowin’ up real good, a pensive string-section score, secret histories thrumming beneath every handshake and insult. The instant an assassin makes contact with a grungy computer hacker, you just know the former will eventually ice the latter.

It’s all a bit hackneyed sure, but there’s a knowingness—a cynicism—suffusing it all. Donaldson simultaneously subverts and elevates his own jump-cut/jump-zoom malarkey by poaching two 007 alums and placing them front and center: former James Bond Pierce Brosnan snarling as a grizzled ex-CIA heavy, and Olga Kurylenko as a Belgrade social services case worker who may be more than she seems. Long a codpiece avatar or the butt of the joke, Brosnan is really acting here, regret and fury seeping from every pore; he’s definitely capable, but there’s certainly nothing cool about a guy who’s willing to mortally wound an innocent to make a key point.

While he’s essentially portraying a more human Bond here, Kurylenko’s doing the same: revisiting her character from Quantum of Solace but dialing back the vengeance somewhat. The plot has something to do with war crimes, the CIA angling for control of Russia, ultimately a more hesitant variation of one of several climaxes from Kill Bill I. But to me the plot is secondary to a vehicle for Will Patton’s clenched-jaw scenery chewing or Luke Bracey’s insolent, violent sullenness or mobile-phone tracked foot chases through graffiti’d tenements and weekend bazaars. Look at Caterina Scorsone’s immaculately tailored suits, her pinched mien, so redolent of her Private Practice tenure, yet graduating beyond it, perhaps on the cusp of becoming the Joan Allen-as-Pamela Landy of this shit if the sequel can net even an eighth of a billion dollars.