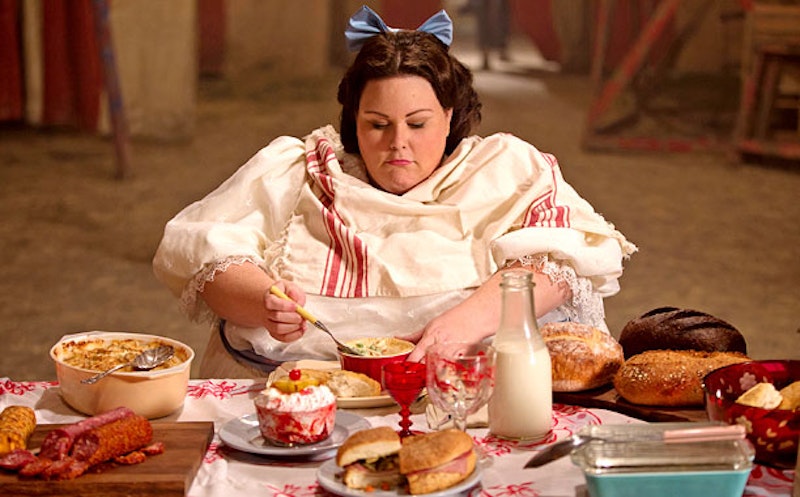 • After taking a week off for Thanksgiving, American Horror Story is back and a bigger mess than ever! This weeks episode, “Blood Bath,” opens with Dandy’s mother chain smoking while she tells her psychiatrist that her son has always been a “spirited” boy; so spirited he murders cats and small boys who he likes to run around and hold hands with. I blame the writers for not knowing another adjective than “spirited” to describe a deranged psychopath, because that's the only word Dandy’s mother ever uses to describe him.

• Everyone is searching for Ma Petite and as soon as they find a bloody dress of her’s they all assume she must have been eaten by a coyote. Yeah, what else could it have possibly been? It’s not like people have been disappearing right and left suspiciously because of Jessica Lange.

• Jessica Lange sobs some more, which is really all she has been doing this season and Kathy Bates’ character finally calls her out on her shit. Things escalate quickly and Bates brings out a gun, then claims it is for herself. Jessica Lange then puts a knife through Bates’ eye because why not? Clearly these tents are sound proof because no one seems to be able to hear all these heated debates.

• The Ax-man from Season 3 is back as the craftsman who made Elsa’s legs after they were chopped off. There was really no point for him being in this episode except as a sly nod to those who loved season 3.

• Where is Sarah Paulson this episode? With only one reference that Bates’ character “hide them” away from Jessica Lange, the audience is left to wonder where they’ve scampered off to.

• Jessica Lange and Denis O’Hares’ character make Kathy Bates’ death look like a suicide by decapitating her and having her crash a car into a tree. No one really asks many questions because Jessica Lange sobs some more. I imagine Kathy Bates’ went up to the writers of the show and was like, “Hey, so I have this thing coming up in the next few weeks called being a respectable actress, and I should probably get back to that…” and they were like “Okay!” and wrote her off unceremoniously.

• Evan Peters’ character, Jimmy, attempts to dull the pain of losing his mother by getting wasted for the entire episode.

• Gabourey Sidibe is back! She’s extremely skeptical about her missing mother (who was murdered by Dandy), so she makes the choice to wait for her mother as long as it takes. I love her being back in this show being skeptical of everyone and looking fabulous in her business jackets.

• During Ethel’s (Kathy Bates) funeral, the incredible Angela Bassett gives a nail to the cross monologue about how women need to band together and get revenge on Grace Gummer’s (The Lizard Girl) father for mutilating her face. Girl power! Can we get a season where Angela Bassett is the lead? That would actually be a show I would enjoy watching.

• Dandy meets with his mother’s psychologist and learns that his mother has deceived him into being psychoanalyzed. So the crazy boy strikes a bargain with his mother: he will go to therapy if she kills Gabourey’s character. Once again, Dandy is the most interesting character this season and actually makes the audience feel as if they’re watching a show with a cohesive plot.

• Elsa misses out on Ethel’s funeral because she has to recruit a few new members to her Freak Show attraction. She meets with Barbara, a large woman who she renames as Ima Jiggles in order to exploit her. Ima seems fine with it though, as she is given a constant supply of chicken pot pies. Not going to lie, I would be fine with exploitation too if I got to eat all day every day.

• Angela Bassett and a few other of the Freak Show girls capture The Lizard Girl’s father and attempt to tar and feather him as well as castrate him. My sweet Emma Roberts overhears his screams and bursts in to make a sweet speech about how murder will change them all for good. I really love Emma Roberts in all capacities, but I think I preferred her as the bad-mouthed Madison Montgomery in season 3. In the end, the Lizard Girl releases her father and we can all have a collective sigh of relief.

• Trouble in paradise! When Esmeralda tried to kindly tell her boo Jimmy (Evan Peters) to put down the bottle and deal with his pain they break up. Uh oh! I wonder if this good-girl side of Emma Roberts will reveal to him that she’s been secretly plotting to slaughter all his friends for money.

• Dandy and his mother finally fight when she admits to him the only person she’s ever truly and fully loved is him. He calls her a gold-digging weirdo who sleeps with her cousin for money, and she attempts to get him on a boat so he stops slicing people up. He shoots her in the head when she claims she can’t go without him, then bathes in her blood. I’m all for Dandy being a psychopath in order to make this season actually watchable, but the allusions to other mass murders is becoming a gag. Bathing in his mother’s blood? How very Elizabeth Bathory of you, Dandy.