Out Of The Office

Steve Carell's exit puts The Office in a tricky spot. 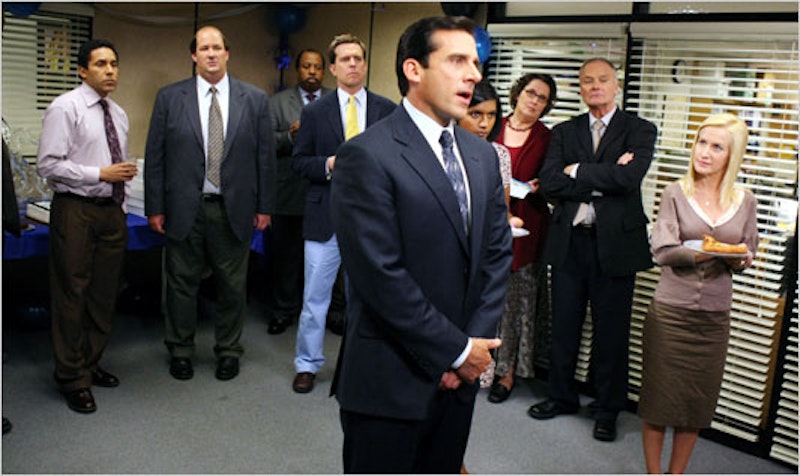 Tonight’s farewell episode of NBC’s The Office, the initially ratings-starved version of Ricky Gervais’ enduringly original Britcom, should serve as a fine epitaph for what became over its seven seasons the new anchor of the network’s Thursday night comedy line-up. Though expanded to 50 minutes—a length that its “very special episodes” in the past haven’t always benefited from—tonight’s valedictory promises the precise balance of hilarity and pathos that the best episodes of the U.S. version have delivered, as indicated by this NBC promo:

Of course, this isn’t the last episode of The Office; it’s simply the last one prominently featuring Steve Carell as Michael Scott, the oft-clueless manager of the Scranton branch of paper company Dunder Mifflin. In an unusual gambit, the show’s producers are seeing the Scott character off before season’s end, notionally to maintain interest in who will replace Scott as head of the office—someone from the existing cast or, perhaps, a newcomer.

That the series is continuing after its main asset has exited is a gamble, though given NBC’s programming plight of the past few years it’s certainly an understandable one. Trusting that its strong supporting ensemble can carry the day, the post-Carell Office should be a fascinating experience, successful or no. The comparison that keeps coming to mind is AfterMASH, the absurdly-titled, ill-received (but actually not bad, if dim memory serves) continuation of the lives of several M*A*S*H characters stateside after the Korean War ended.

The Office’s creative team might blanch at such an association, but it obviously remains to be seen if the show can succeed after its star attraction moves on. Even if it sinks, it’s been a godsend to the careers of all involved, from John Krasinski (a seemingly never-ending parade of would-be star-making vehicles like the blink-and-you-miss-‘em Away We Go and Leatherheads) to Angela Kinsey (a series of mildly odd Clairol commercials) to writer/actor B.J. Novak (one of the less plausible Inglourious Basterds). Even Phyllis Smith, one of the plus-sized triumvirate who sit in the back, managed to land a significant role in Cameron Diaz’s forthcoming foul-mouthed comedy Bad Teacher.

Meanwhile, Mindy Kaling, whose writing duties on the show easily overshadow her performance as the shallow Kelly, is parlaying herself as the next Tina Fey, via a book of humorous essays (Is Everyone Hanging Out Without Me?) and a pet film project called The Low Self-Esteem of Lizzie Gillespie.

Still, it’s all been about Carell up to this point. He’s deftly swatted out of the park whatever nuance the show’s writers have thrown at him: Clueless goofus, mean-spirited egomaniac, lovelorn prat, sweet-tempered confidante. Whether he’ll ever escape his Michael Scott typecasting remains to be seen; to date, his big-screen efforts—The 40-Year-Old Virgin, Get Smart, even Dan in Real Life and Little Miss Sunshine—have mostly been variations on the Scott theme.

(Ditto Rainn Wilson, whose monstrous Dwight Schrute seems to be the only thing he’s being asked to play in the likes of The Rocker and Super; anyone who’s seen his more subtle side as Ruth Fisher’s distinctly odd lover on Six Feet Under or as the callow cameraman in Baadasssss! knows he’s capable of much more.)

No TV series can last over multiple seasons with absolute consistency, regardless of what Sopranos or Mad Men fanatics might claim, and The Office is no exception. Once it got past aping the Gervais original and started investing Scott with some recognizably human emotions (or “Americanizing it,” as some would have it), the balance between empathy and belly laughs became ever trickier; spread over seven seasons, it’s frequently gone overboard in one direction or the other, often at the expense of its carefully crafted characters—something that’s become ever-more apparent over the last couple of seasons.

Still, it’s been satisfying to see Scott ride off with Amy Ryan’s Holly (even if that relationship was put through some ridiculous twists); the sequence leading up to his proposal a few weeks ago was a high point of the entire series, capturing its whimsy, hilarity, and heartstring-pulling all at once. And if the show hasn’t quite known what to do with Krasinski’s Jim and Jenna Fischer’s Pam since the characters married, at least that journey’s been less mawkish than it could have been.

Surprisingly, The Office has also been fumbling about with DeAngelo Vickers, Scott’s temporary replacement, played by Will Ferrell. The character exhibits most of Scott’s traits, but for some reason the writers seem intent on cramming them all together at the same time, so that nobody (including viewers) is ever sure of which face he’ll present in a given scene. Ferrell’s ably up to the challenge, but so far the whole thing seems like a wildly missed opportunity.

That doesn’t bode well for the future, or for the season finale, whose overburdened-with-guest-stars roster (Gervais, Ray Romano, James Spader) became even more so with last week’s announcement that Jim Carrey will also be on hand. There’s been some speculation that any one of those names could be cast as Scott’s replacement; none of them exactly sets the pulse racing, and throwing Carrey into the ensemble would likely be a bigger disaster than The Number 23.

If the show ultimately does collapse after Carell’s exit, it’s been a mostly enjoyable ride; the U.S. Office shrugged off the ur-text of Gervais’ original and became a snappy little production that proved it had more on its mind than making folks laugh. If not exactly deep, its pleasures have been wide. At least, that's what she said.