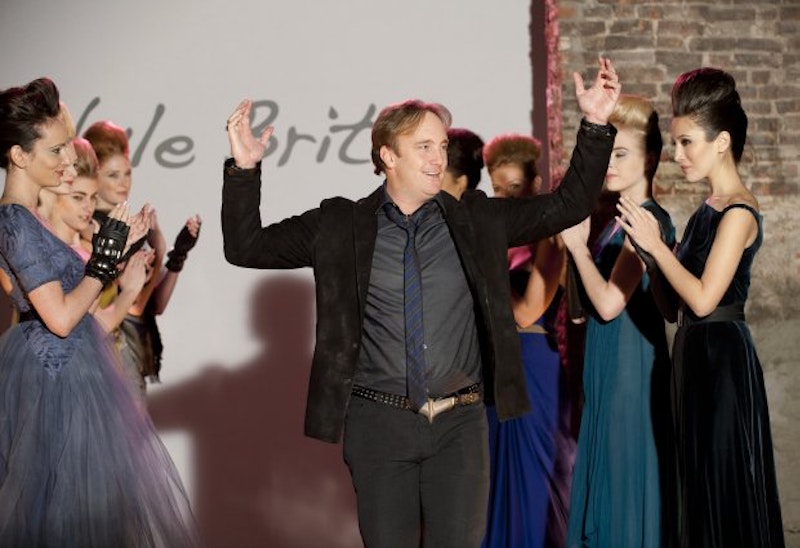 There were a lot of pleasures to be had, large and small, in the season premiere of Law & Order: Criminal Intent. Many of these had to do with Criminal Intent being on some classic Criminal Intent bullshit—no gratuitous backstory, no personnel drama, just straight psychoanalytical sleuthing—but even a mere glimpse of the acerbic Leslie Hendrix and her falsies qualifies as a treat, and it’s a delicious irony that an actor who’s portrayed many a Law & Order baddie (Jay O. Sanders) is suddenly Goren (Vincent D’Onofrio) and Eames’ (Kathryn Erbe) commanding officer. Watching Goren fake it as a flamboyant Armani intermediary to set a trap for a suspect tickled me. But Jay Mohr stole the episode as Nyle Brite, a fashion designer with a taste for coke and hookers who the detectives zero in on when a guest at one of his soirees turns up dead, in her apartment, wrapped in an expensive rug.

The plot doesn’t matter much—zigzagged whodunit, you might be surprised who the real killer is—but Mohr’s convulsive, sneering turn as a thinly-veiled Charlie Sheen was, if not a revelation, worth pondering. Watching Mohr shiver, posture, and preen like a snake struggling to escape its own skin, sulking petulantly, exploding with that escaped mental-patient flailing during his last scenes—“Instinct!” lamely standing in for Sheen’s immortal ‘Winning!” but Mohr makes it work—it was almost possible to forget how abysmal an actor he usually is, how much of an uneven, patchwork joke his career has been. Nine out of 10 people on the street will remember him as Tom Cruise’s Judas-like pal in Jerry McGuire, with good reason: that role fit Mohr’s insincere, blithely arrogant persona like a glove, and might have been the start of something at least moderately profitable. What followed: a string of movies you never saw, a couple short-lived series you didn’t watch, and a hosting stint on Last Comic Standing that was somehow even less empathetic than Joe Rogan’s turn on Fear Factor.

So it was interesting to watch Mohr so enthusiastically and energetically ape Sheen, a man whose career is the opposite of Mohr’s in so many ways that it’s disorienting. The upside of a consistent streak of mediocrity is that whenever you do something half decent, you’re sure to impress people, and because we’ve come to expect next to nothing from Mohr, his cocaine-cowboy routine—this inspired, discomfiting mimicry of a celebrity spectacle gone stale—counts as a minor win, a victory of his own lack of thespian ability. Dude isn’t going to win an Oscar anytime soon; maybe he’ll hit the comedy tour circuit, where so many failed prime-time comics return to fade and die a journeyman’s death. Sheen’s bank account is the envy of many of us after nearly a decade spent sleepwalking a lightly fictionalized version of himself, but unless he can leverage his post-Empire defection into something meaningful or game-changing, 2011’s the year his caboose veered off of the rails.