Orson Welles and Search for the Real Self

F For Fake is still the best film ever made about "authenticity" in art. 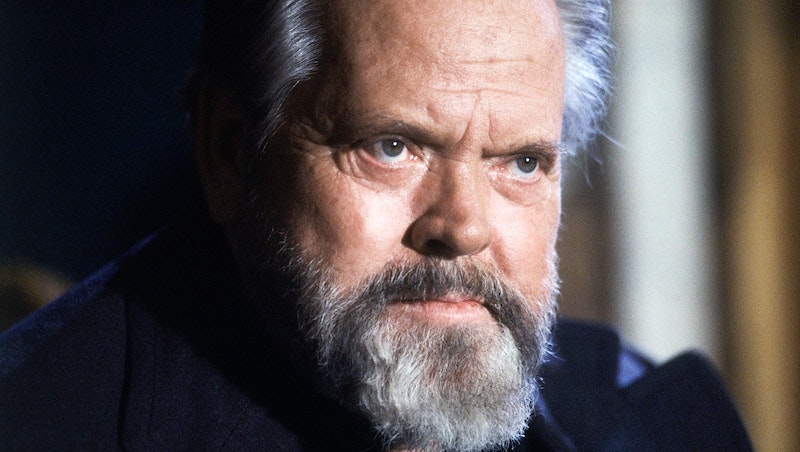 Throughout his life, Orson Welles defied and eluded artistic categories. Even as a man, distinct from his vocation as an artist, Welles was unique. Steeped in Shakespeare, possessing a distinctly American vision and verve, having an appreciation for European artists, while rejected by America and accepted in Europe, Welles’ personhood and persona were (and still are) often difficult to distinguish. Yet there’s one thing that Orson Welles was not—a fake.

He did, however, make a superb film that explores fakery, fraud, and authenticity in art. Released in 1975 (with private and European screenings in 1973), F for Fake has several layers. One involves a presentation of two fakers–Elmyr de Hory (the great art forger) and Clifford Irving (a writer who faked a biography of Howard Hughes). The lives of these two frauds are intertwined in the unlikeliest of ways.

Welles uses de Hory and Irving as a way to analyze something far more important than the specifics of these two lives, namely the authenticity in Art. In addition, and typical of Welles, he connects the subject that’s essentially philosophical into the experience of our everyday lives. Are we real? Are we frauds? Are we relating to one another in authentic ways or are we functioning under the pretense of truth? Are we persons or personae? Do we wear metaphysical masks and refuse to be vulnerable? Welles didn’t much care to show his own vulnerability. In Henry Jaglom’s conversations, My Lunches with Orson, Welles revealed (and unsurprisingly simultaneously concealed) some aspects of F for Fake and his own life. Jaglom tries to turn the tables around and find out something more about Welles.

Henry Jaglom: “…isn’t F for Fake at least partially biographical or autobiographical? Don’t you reveal yourself there? At least it poses as a confessional film. Within which Elmyr de Hory, the art forger, is the fake. And then, on the second level, Clifford Irving is the fake, for having fabricated that biography of Howard Hughes, and then written a biography of de Hory called Fake. And, finally, the filmmaker—you—is the fake.”

Orson Welles: “Not at all. It’s a fake confessional. I’m not really confessing. The fact that I confess to be a fraud is a fraud. It is just as deliberate and manipulative as that. No, I think I’m absolutely genuine—that’s a lie. I never tell the truth.”

Welles has an incredible desire to separate himself from his creations. He wouldn’t care for filmmakers who like to talk about their “issues” and how they dealt with them explicitly in their films. “I don’t want to know about the hang-ups of the writers or movie people, either. I’m not interested in the artist; I’m interested in his work.” Welles is arguing for an absolute separation from ethics and aesthetics, and welcomes a disinterestedness that comes with being a critic. Any discussion of an artist’s interior life contaminates or stains the creation itself.

But that’s just one layer of F for Fake. One of the themes that emerge in the film is the absurd and unnecessary significance of experts. Without experts and the art market, for example, there would be no need for art forgers. A painting wouldn’t be singular or unique because it speaks for itself but because of the artist’s name attached to it, and the pedantic approval of an expert. By exploring de Hory’s exploits, Welles touches upon the ontology of art itself.

If de Hory’s fake is just as good as Modigliani’s original, and we’re not privy to the information that it was painted by de Hory, then what changes in our minds as the viewers and admirers of the painting when we do find out the truth? Should the painting still be enjoyed? Do we focus too much on who made it and not on the object itself? Do we have to attach the artist to his art so inextricably to the point where we determine its value based on that artist’s private life? (Think of the 2017 controversy over the painting by Balthus.)

Welles is a philosophical filmmaker, yet he creates a world in which we’re humanized and not mere ideas floating around. What indeed is art? And who determines what ends up becoming art? “It’s pretty but is it Art?,” Welles quotes Kipling in the film. In our world of 24/7 expertise during which “experts” weigh in on just about everything, and tell us to not dare challenge them, Welles’ masterpiece is even more relevant (I use the word “relevant” reluctantly because I think that Welles would hate it).

“I’m deeply suspicious,” says Welles to Jaglom, “of the unanimity that people have about the whole range of art and music.” “Do you mean that the reputations of Beethoven or Picasso should be challenged?,” asks Jaglom. “Yes!” says Welles resoundingly. Welles in his usual fashion is being silly and coy. He continues to say that he doesn’t doubt the greatness of Mozart or Beethoven, but it’s the experts and critics that tend to take over the Art and render it something else.

If we accept that there’s canon, then we have to ask why. Why does one artist belong in the Pantheon and the other doesn’t? Is it because it stood the test of time? Or because there’s an artistic depth that’s impossible to ignore? Why should one person be in charge of taste? At the same time, if everything is a matter of taste, then art would be subjective.

Welles had high standards and he distinguished between what he considers to be a good and bad film. If he didn’t have such discipline and power, he wouldn’t have made films that exude human capability toward greatness. But the questions he poses in F for Fake aren’t that we should doubt Mozart, Beethoven or Picasso but we should think for ourselves, that we should be free of someone else’s opinion about Art. He knows that de Hory and Irving were scoundrels but the immorality of their actions is accidental for what he wants to accomplish. What’s more fascinating than the fact that both forgers are unethical is the idea of authenticity, and whether someone like de Hory was capable of being authentic. De Hory’s masks were duplicating with every fake that he painted, and we have to ask how much will trickery (that has serious consequences) change the evolving person over the course of their lifetime?

For Welles, the search for authenticity in art is the search for the authenticity of the self. Don’t ask him to reveal himself, because as he says in F for Fake, quoting Picasso, “Art is a lie. A lie that makes us realize the truth.” Welles’ concealment of himself is an illumination of the other. By concealment, he lifts the veil of existence and becomes the aesthetical vessel through which we’re humanized and invited to explore what  makes us human.