Nothing But Build Up

The disappointments of the Harry Potter franchise. 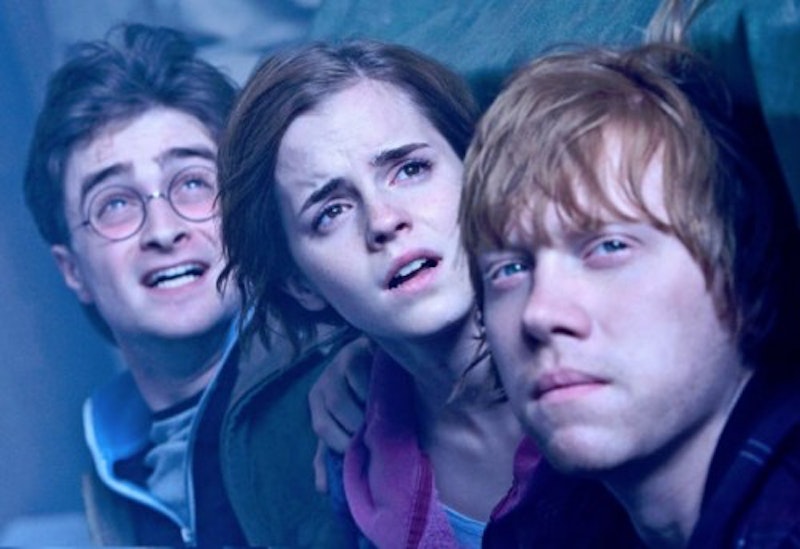 I was supposed to go see the last Harry Potter movie with my utterly obsessed seven-year-old son. We got into the car to drive to the theater with our son gibbering on about Quidditch and Hogwarts and Voldemart, and then I pressed the power button on the Prius… and pfft. Nothing. The battery was dead.

Which is fairly typical of my entire experience with the Harry Potter franchise. Lots and lots of build-up followed by a big fat zilch. I don’t hate the Harry Potter books. I read the first four of them, and watched the first movie. My son’s obsession with them has moved rapidly from amusing to annoying to thoroughly oppressive, but still, it’s better than Thomas the Tank Engine or superheroes. The Potter books are at least marginally readable… especially since my son has learned to read himself and is going through them on his own.

Nevertheless, what bugs me about the series is that it should be better than just tolerable, and not just because the whole world is apeshit over it. The first book opens with a horrid family right out of Roald Dahl, and I quite like that lovely scene with the owls dropping drifts of letters addressed to our hero. The idea of a wizarding school seems pretty solid. And there are lots of excellent British children’s books series. If the How To Train Your Dragon books can be consistently top-notch, why not Harry Potter?

And the answer is: Quidditch. The notion of wizard-soccer on broomsticks is pretty clever, and I can certainly see the appeal for kids—who doesn’t want to fly? But the actual game is incredibly stupid. Most of Quidditch is devoted to goal scoring, but a huge bushel of points are awarded not for scoring goals, but for catching a special ball called the Snitch. Whoever catches the Snitch also ends the game—all of which means that, for most intents and purposes, the vast majority of the action taking place on (or above) the Quidditch field is pointless.

You can see why J.K. Rowling designed Quidditch as she did; the rules make the Seeker, who goes after the Snitch, by far the most important player on the field. Since Harry turns out to be a supremely gifted Seeker, all the matches end up being about Harry’s wonderfulness. This, observation of my son has informed me, has a huge appeal to the core under-nine audience. But for anyone else, Quidditch as repetitive occasion for transparent hagiography gets very old very quickly.

This is nit-picking to some extent. But it’s also emblematic. There are a lot of things like Quidditch in Harry Potter; places where Rowling failed to fit the pieces together right and the result is the irritating sound of audible grinding. A friend of mine pointed out that the thing that gets him is that Harry, when we first meet him, should be a volatile, unstable wreck. He was systematically emotionally abused by his foster parents, the Dursleys, throughout his childhood, and while nurture isn’t everything, it’s something. Kids treated that way have real problems; they don’t just shake it off in a few pages and become do-gooding everyboys with loads of inner resources.

The problem isn’t the scenario per se.  As mentioned above, if the same story was told by Roald Dahl, you wouldn’t think about it for a second, any more than you ask questions about the actual logistics of building Mr. Wonka’s chocolate emporium. Instead, the difficulty is Rowling’s tonal control—or the lack thereof. Harry Potter comes out of the Lewis Carroll/E. Nesbit/Dahlian tradition of British nonsense, with its fantastical illogical goofiness. But Rowling also wants to create an epic battle between good and evil indebted to Lord of the Rings.

The result is a lurching hodgepodge; a magical world that isn’t internally or externally consistent, but is too concerned with it’s own inner-workings to ever really take flight into whimsy. The first book gets at some of the rush of wonder in classic fantasy… but as the kids learn more, magic is rapidly domesticated, turned into a series of recipes. You’re left with endless piles of prose explicating labyrinthine rules, most of which don’t even have the geeky satisfaction of making sense.

I know lots of folks say that the last movie is pretty good, and that the series in general becomes darker and more effective as it goes on. Maybe so, and maybe my car will work well enough to go see it. I’ve had enough exposure to the series, though, to feel fairly confident that wherever Harry Potter goes, he will go there with a pfft.