A long-bruited “reboot” of the horror classic stumbles out of the gate. 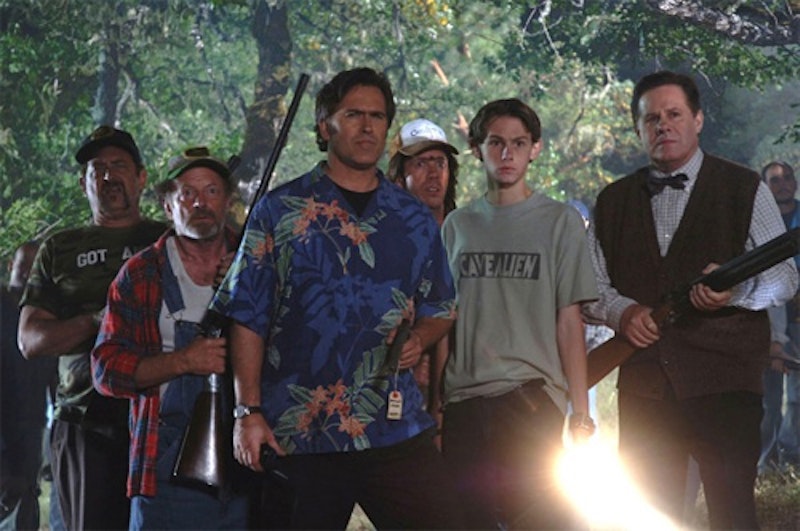 Notwithstanding a few exceptions, the Hollywood “reboot” has become one of the most dreaded specters haunting the cineplex. For every Dark Knight, there’re at least four Green Hornets or Superman Returnses, driving a stake into the would-be franchise once and for all (or at least for a few years; Man of Steel brings Supey back in December 2012! Hurrah?)

This has been particularly, appallingly true in the horror genre, where the likes of The Texas Chainsaw Massacre, My Bloody Valentine, The Amityville Horror, and Friday the 13th have come and gone, memorable only for… well, only for being made, actually. (Practically the entirety of Wes Craven’s and John Carpenter’s filmographies have been remade, to similarly negligible effect.)

The reason for this is hardly surprising. You can always crank out a title with a bunch of winsome teens slaughtered in ever-more-creative ways for a relatively low budget; having a familiar title helps sell the resultant masterwork in the overseas markets. (Hence the moronically titled Final Destination 5, coming next month. Can we all start a collection to ensure it really is final this time?)

Jason Zinoman, a New York Times theater reporter who also writes occasional columns for Slate about the over-the-top absurdity True Blood, currently has a relatively well-received book out about the horror mavens of the 70s, Shock Value. To tout it, he wrote a series of columns last week for Slate about what can be done to fix the genre. Though its multitude of factual errors brings into question just how authoritative we should take him, Zinoman did provide one fairly thoughtful screed on how to make decent remakes; namely, by injecting something original into them instead of just upping the gore quotient. (“Be original?” you can hear Bob Weinstein wonder. “It just might work!”) Whether you’re ever going to get anything more than spears in eyeballs under the Friday the 13th banner is debatable, but it’s not a bad place to start.

Sam Raimi’s beloved Evil Dead series—most of the reputation of which comes from the second one—is the latest “lucky” number to be pulled at the Horror Remake Deli. Whether you’re excited about an Evil Dead reboot or not—and I have to admit that, with Raimi on board as producer, I find the idea semi-intriguing—chances are your expectations took a massive dive when it was revealed yesterday that Diablo Cody will be writing it.

Yes, that Diablo Cody. The one who gave us Juno and Jennifer’s Body, and who somehow had the good fortune of having Toni Collette for the otherwise lame The United States of Tara, since canceled by Showtime. Excited now, Homeskillet?
Google “hate Diablo Cody” and most of the immediate results date from 2008, in between the time that Juno went from a quirky little indie film to an overrated homunculus and the release of Jennifer’s Body, a would-be black comedy about sexual politics in high school that was overwhelmed by the kiss shared by stars Amanda Seyfried and Megan Fox (there was a time when Fox was considered a star). The fact that the movie blew on several textual and subtextual levels didn’t help.

Most of the ’08 talk was about whether there was an anti-feminist bias at play in all the Cody hating. After reading her mercifully short-lived Entertainment Weekly columns and catching bits and pieces of her preening interviews, I think it’s safe to say: Nope, that wasn’t it. Instead, it was the precious, twee, aren’t-I-clever stylings (“Honest to blog!”—uh, okay) that set viewers’ teeth on edge.

And now she’s got her mitts on Evil Dead. Even with Raimi and star Bruce Campbell producing (it’s still unclear whether Campbell will appear onscreen as the long-suffering Ash), this does not bode well. It’s still entirely possible that this thing will never see the light of day; after all, they’ve been talking sequel/reboot practically since the last entry, Army of Darkness, wrapped in 1992.

And if it does come out, and is a mess? Well… Phuket, Thailand.