Jordan Peele’s third film is an insipid and dysfunctional mess. 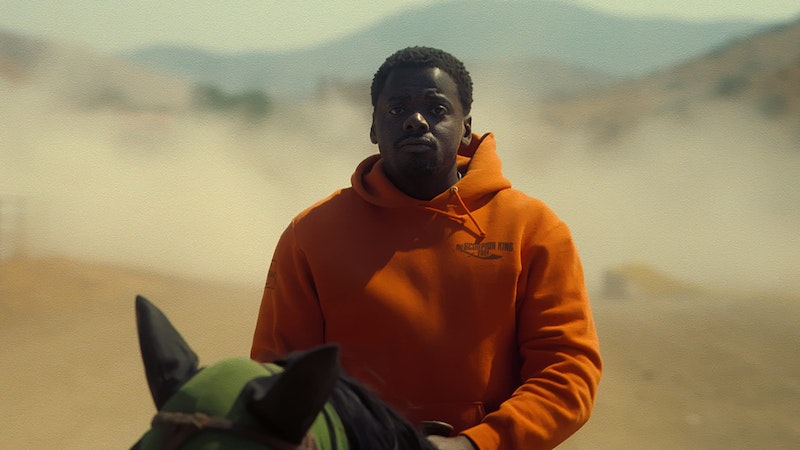 When I saw Nope on Saturday night in a mostly full theater on the Baltimore City/County line, there wasn’t much audience reaction. Plenty of characters in Nope say “nope,” namely OJ (Daniel Kaluuya) and Emerald Haywood (Keke Palmer), sibling ranchers trying to maintain their late father Otis’ (Keith David) business renting and training horses for the entertainment industry. They’re the only characters the public has really heard from since the trailers for this movie became unavoidable and present before every new movie I saw (all three—three—movie theaters in Baltimore City are playing Nope right now, and have been playing the same trailer for nearly six months). The blinding artistic and commercial success of 2017’s Get Out earned Peele credit which he used up with 2019’s ambitious but dysfunctional Us.

Talking to Fandango, Jordan Peele said the following about Nope: "I wrote it in a time when we were a little bit worried about the future of cinema. So the first thing I knew is I wanted to create a spectacle. I wanted to create something that the audience would have to come see. So I set my sights on the great American UFO story. And the movie itself deals with spectacle, and the good and bad that come from this idea of attention. It’s a horror epic, but it has some points in it that are meant to elicit a very audible reaction in the theater. So hopefully, when we go see it, we’re going to hear a lot of ‘nope!’”

The trailer for this movie was vague enough to suggest just about anything, with all of the movie’s best images cherrypicked for inclusion. Nope is as insipid as it is pretentious, high on itself for its numerous on-the-nose metaphors, symbols, and cheap shots—what’s the point of chapter headings if not for some literary sheen over an uninspired genre movie? I have little patience for those complaining that Nope was disappointing because it “isn’t a horror movie, it’s a sci-fi movie,” and while it’s true that I didn’t expect any aliens or UFO’s, I don’t think anyone would have cared if the movie worked. Nope is just over two hours long, and plenty of people were taking pee breaks. That doesn’t happen in a good movie, or one that has the audience’s attention. Top Gun: Maverick, BlackKklanman, and Uncut Gems are a few recent examples that made people run to the bathroom or hold it in.

People were laughing at the UFO, the most boring looking UFO I’ve ever seen in a movie. Considering how much raw material is presented and never developed or explored about the exploitation and violence of the entertainment industry, I thought that maybe the beige tarp UFO was supposed to look like a prop that would be gussied up in editing, but as far as the movie’s concerned, it’s just an alien. The “Gordy” subplot that opens the movie and contains its most cheap and exploitative images feature a chimp actor going bananas on a sitcom family, killing one woman and severely injuring another. A young Jupe Park (Steven Yeun) hides cowering underneath a table before Gordy sees him, and just before the chimp fist-bumps the kid, he’s shot by the police. I heard some girl go “aww” when the chimp went to fist-bump him—give me a fucking break!

There’s nothing cheaper than a close-up of a scared child, particularly if their face is artfully streaked with blood. Park grows up to run a ranch and museum dedicated to the incident, an attempt at reclaiming and controlling an impossible to understand and reconcile trauma, yet another easy topic to put into a movie, book, or TV show and immediately get people on your side. Nope is okay—certainly better than recent releases Firestarter, The Unbearable Weight of Massive Talent, X, and The 355—but it’s a massive disappointment considering how long that teaser trailer was played, and the idea that it has “enough for 10 philosophy courses,” as one reviewer put it, is insane.

Nope doesn’t work as a conceptual piece, never delivering on any of the material on “spectacle” that it presents and then withdraws; and it doesn’t work as a movie, with a rudderless second half with zero personality and nothing holding you on. For a movie that cost $68 million, it looks remarkably cheap, with atrocious CGI and filmmaking that isn’t at all proportionate to the way this movie and Peele in general are written about. If Peele was looking to bring people back to movie theaters with “spectacle,” he should’ve taken a cue from Christopher Nolan’s Tenet, which was a genuinely spectacular but empty movie released in dire circumstances in 2020. I saw it at the same theater as Nope, and although it was even longer and made even less sense, it was big and loud and gripping. Like I wrote at the time, it’s a beautiful and intricate machine that does nothing. Nope has even less going for it.