No Rules, Not Quite Right

Baz Luhrman’s Australia is the perfect cinematic experience for anyone who found Chinese Democracy a little too mellow. (Grade: D) 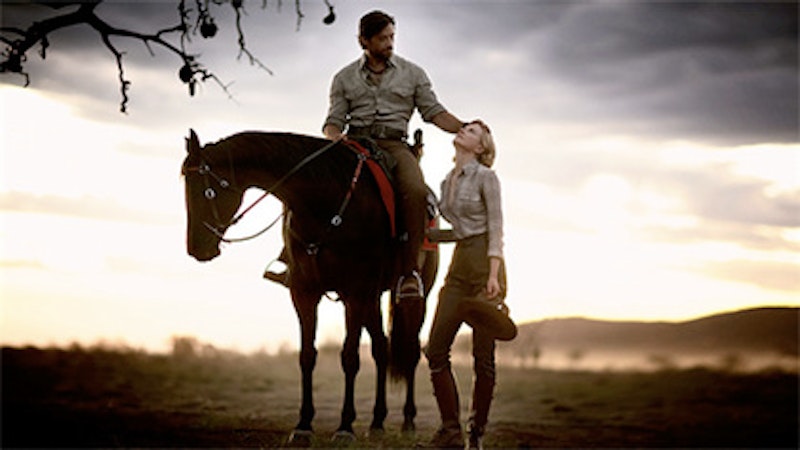 As the creator of both William Shakespeare’s Romeo + Juliet and Moulin Rouge!, Baz Luhrman has directed at least two of the most annoying movies in history. And now here he comes, storming through the outback on a wild steed, with a 40-pound bag of glitter and the many canisters of Australia on his back. To call this movie obnoxious is to miss the point; this is a film so enormous, so broadly mapped and so eager to please, that only the roughest cynic could completely pan it. You may never see a movie that feels so effortful or calculated, or one that’s at once so thematically old-fashioned and nightmarishly contemporary in its botched aesthetics. It’s only 155 minutes, but it deserves an intermission, maybe two. It’s a work of hubristic, untamed ambition and also a completely hollow piece of cinematic candy. Any cinephile should feel obligated to see it, but I’m not entirely sure it’s a movie in the first place. More like an insufferable, gleaming pageant with a heart of confetti and confectioner’s sugar.

Australia is a sweeping, referential cinematic epic made by a person with boundless enthusiasm but no apparent knowledge of how movies work. There are obvious and repeated nods to Gone With the Wind, The Wizard of Oz, Lawrence of Arabia, and any number of cattle-drive westerns and WWII dramas, but Luhrman seems uniquely unaware of how to properly tell a story on screen. His film is really three separate genre pieces sutured together end-to-end. It starts as a screwball comedy western, where Lady Sarah Ashley (Nicole Kidman) travels down under in 1939 to retrieve her supposedly philandering husband from Faraway Downs, the cattle farm he operates in the outback. But it turns out that Lord Ashley was telling the truth, and he’s been recently killed for trying to fend off an evil cattle baron who’s trying to steal his cattle for sale to the English army. Enter The Drover (Hugh Jackman), a rural Aussie Rhett Butler type who proudly intones, “No man hires me, no man fires me.” But with Lady Ashley in competition with the treacherous King Carney (Bryan Brown) and his scheming henchman Neil Fletcher (David Wenham), Drover lends his herding expertise to help fight for what’s right.

A full-scale (albeit crudely CGI-derived) cattle drive ensues, complete with a dramatic showdown finish. It feels like the end to the film, and a relatively satisfying if silly one at that; but then you look at your watch and realize that nearly 90 minutes remain. Luhrman, not content to do a Barbie-styled western, is just getting started.

Upon landing in the title country, Lady Ashley befriends young half-white/half-aborigine boy named Nullah, whose mixed ancestry places him in the “Stolen Generation” of societally ignored boys and girls. So in addition to all the fluffy fun and set pieces, Luhrman also tries his sticky-sweet hand at some lurching, laughable cultural history. Nullah’s grandfather is King George, a loin-clothed native medicine man that haunts the outback and is presented as what I assume is the Australian equivalent of a magical negro. (A smaller character, the Asian cook on the farm’s staff, is also a racial stereotype worthy of Breakfast at Tiffany’s.) Nullah’s mother dies while hiding from the police that would take her boy away, and so Lady Ashley—who we learn is unable to have children—plays surrogate mother.

With one movie down, Luhrman transplants the newly wealthy Ashley and Drover to the refurbished Faraway Downs, where they act out an odd but happy family dynamic. But then evil Fletcher reappears to renew his assault on the farm, and Nullah is called to go on walkabout, and suddenly the whole dynamic is torn asunder and the protagonists once again have their backs against the wall. Nullah and King George are captured by outback police, Drover and Ashley have a falling out, and then World War II begins. This last film—surrounding the Japanese aerial bombardment that would precipitate Australia’s involvement in the Great War—is as sappy and clichéd a war movie as could possibly be imagined, and its farcical plot and ham-handed emotional gestures ultimately undid whatever bemused goodwill I originally had for the movie.

Australia is a bloated, ridiculous movie, but one that I couldn’t help but enjoy for the first two hours. On one level, I can only admire the seeming total lack of restraint that Luhrman has; it’s nearly amazing to experience the blind, tone-deaf enthusiasm with which he deploys his hackneyed storytelling tropes and racial caricatures. Or to witness the awful, tacky special effects that Luhrman inexplicably and consistently resorts to rather than just picking a good lens and focusing it on the beautiful natural scenery of his story. Luhrman is a woefully unsubtle and aesthetically inept moviemaker, but here the ambition and obvious effort to entertain—if only by sheer force—his audience is enough to forgive Australia’s shortcomings. It’s as if Ed Wood directed a John Ford movie with Michael Bay’s budget.

As The Drover, Hugh Jackman is charming enough and seems to be having a good time. Luhrman periodically gets the guy’s shirt off and parades him around like a piece of man-meat, but Jackman seems aware of the B-movie hokiness of the film. I’m hard pressed, however, to think of an actress who exudes less joy than Nicole Kidman. Part of it is typecasting—she’s spent a good part of her career playing starchy, emotionally distant authority figures—but there’s also an anxious and deeply unhappy quality to Kidman’s face nearly all the time. At the risk of playing armchair psychologist, I assume it has to do with the pressure Kidman must feel to remain youthful and sexy as her scripts demand. Australia, like most of Kidman’s movies, contains multiple references to her character’s ravishing, stunning beauty; there’s no room for mere elegance or graceful aging in the characters that Kidman portrays, and the result is an uncomfortable thinness in her frame and some obvious plastic surgery on her face. When the cracks in Luhrman’s Vaseline-covered airbrushing show, we’re given occasional unadorned glimpses of Kidman’s veiny arms and buffed-porcelain forehead. It’s an unsettling microcosm of female experience in Hollywood, not less so because Kidman has enough clout to handpick her roles.

This is the only undercurrent of true tragedy in Australia; the rest, even the maudlin dramatic points, is a tidal wave of kitsch. Baz Luhrman is a shlockmeister par excellence, but at least here he’s made some form of ultimate schlock. Whatever can be said about the man’s total lack of emotional or cinematic wherewithal, he’s reached some kind of career high-water mark with this all-you-can-eat cotton candy buffet. Australia is an utter fiasco, but it’s a good-natured one and frequently fascinating. Why, for instance, would you cast the world’s most famous Australian actress in a movie about her homeland and then make her character English? And why would you announce that your film concerns the pricklier aspects of indigenous Australian experience, only to then wholeheartedly indulge the most predictable Caucasian romance possible? These kinds of unanswerable questions keep popping up throughout the whole glorious mess, and they make Australia the must-see disaster of the year.