Twilight’s vampires are totally gay, but the movie is pretty good. (Grade: B+) 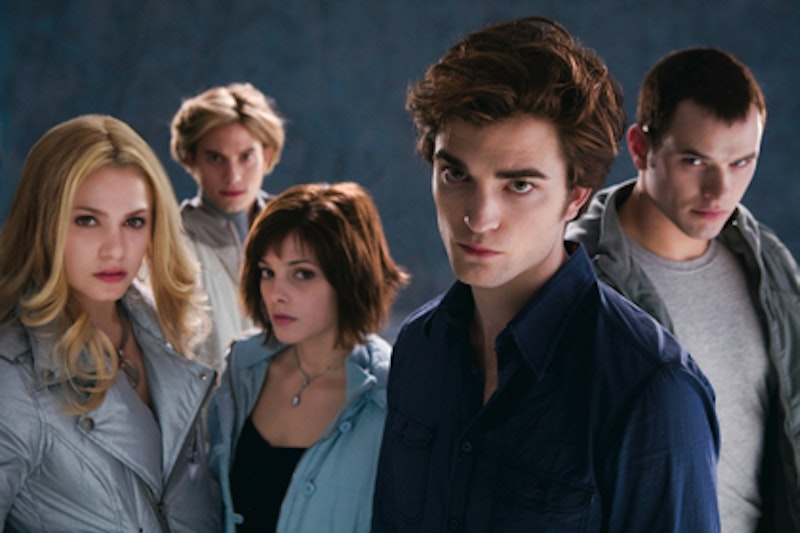 The underrated 2000 film Shadow of the Vampire takes as its central metaphor the relentless consumption of the camera. Cinema itself, it suggests, is the real vampire, and its cold lens battens on our throats as surely as the vampire himself. I found myself thinking about this as I watched Twilight, a pleasant, very entertaining adaptation of the blockbuster novel of the same name. Twilight, like Splice Today favorite True Blood, dwells on the romance between a winsome young woman and a blood-drinking vampire. The young woman, played by the immensely talented Kristen Stewart, affects the film’s vampires like a big bag of catnip. They can barely resist devouring her. Really, this is at the center of most vampire stories—the woman is the one with the power, the uncontrollable fascination, the intoxicating blood. One of the few universal truths of anthropology is the oppression of women—in every human society men seek to control and suppress the female. One explanation for this is the puzzling place of the female in human origins; people, bluntly, come out of women, and this represents a potent, dangerous power that men everywhere have tried to shackle.

Stewart plays laconic teenager Bella, and her languid Lolita grace drives the idea of feminine danger and power home repeatedly and powerfully over the course of Twilight’s unfailingly chaste narrative. Stewart is appealing though not overtly sexual and despite its ludicrous complications her performance in the film’s central romance is affecting and, I shudder to say, realistic. It’s no surprise that the director of Thirteen can bring out the breathless heat of teenage lust, but it’s an achievement that she can do so without being unbearably creepy. Much of this owes to Robert Pattinson, who plays the vampire Edward. Pattinson has the faintly acromegalic good looks of a Byronic poet, a colossal pompadour ready for a 90210-era hair fight, and the standard vampiric super-speed and strength. Yet he’s frightened of Stewart (or at least of his desire to drink her blood). He ricochets around Stewart’s bedroom to avoid their romantic grappling and the pair never consummate their relationship in either a penetrative or supernatural fashion.

Denial of pleasure is something of a trope in the movie. The vampires of Edward’s family (surely the least threatening vampires ever set to film) live in a tasteful but derivative mid-century modern house in rural Washington, wear color-coordinated J. Crew outfits, never drink anyone’s blood and let off steam by playing supercharged vampire baseball. Edward frequently tells Bella how much he would love to drink her blood, and his befanged family stares at her as if she were a delicious roast when she visits them at home, but we’re never really all that worried about her safety. In the sunlight, Twilight’s vampires are not revealed as foul supernatural abominations; instead they sparkle, in Bella’s words “like diamonds” and in the eyes of the viewers like glitter-coated club kids; Nosferatu they ain’t. They make True Blood’s benevolent vampire Bill look like Count Dracula. Later in the movie some less pleasant glittery vampires intrude but even they don’t seem to be having that much fun.

Edward’s family is weird and more than a little dorky; Bella’s family situation is complicated and bears some of the hoof-marks of a literary afterthought. Her parents are divorced and her mother has married a minor league baseball player; for some reason this explains why she has to go live with her father in comically gloomy Forks, Washington. I felt cold during the entire movie because no one seemed to be dressed appropriately for the lovingly filmed wet lushness of the cold Pacific coast. For vampires obviously this wouldn’t be a big deal, but no one can explain to me how Bella can move to Washington without bringing any clothing more substantial than sweatshirts and some mittens.

In one of the film’s more baffling touches, Bella meets vampire Edward in high school; eventually we learn that Edward and his supernatural siblings have been jaunting across the country attending high school in various different areas since at least 1918. I recall a more cerebral scene in Shadow of the Vampire. The Nosferatu, rat-like and electrifying Willem Dafoe reads from Tennyson’s “Tithonus”: “The woods decay, the woods decay and fall/ the vapors weep their burthen to the ground.” Apt for rainy Washington, and for vampires. Tithonus, in Greek mythology, received eternal life but not eternal youth, and he weeps for his tragic loss of lissome body and bright memory. Edward possesses both, yet has apparently chosen to spend eternity repeating 11th grade biology. Perplexing. Talk about denial of pleasure. But then again despite the fact that he’s right around his centennial he’s still dating high school girls. Then again, again, Bella is soignée enough to chat with him about Debussy in his bedroom. Again, it’s a little odd that they spend their time discussing syrupy classical music instead of going at it on Edward’s Mies van der Rohe chaise lounge.

So Twilight treads lightly and briefly in the terrain of teenage sexuality. Director Catherine Hardwicke also handles some early high school scenes deftly. The movie brings up but doesn’t answer the prickly issue of Bella’s power and the men who want to control or destroy it; it camps firmly in PG-13 territory (although the concluding fight scene is surprisingly brutal). Ultimately there was something satisfying about this sanitary, sunny reimagining of the vampire myth. We’ve seen the sexually ambiguous, tortured vampires of Anne Rice, the savages of the Blade series, the perfectly coiffed gothic superheroes of Underworld, and we’ve seen the political, sex-soaked vampires of True Blood. Maybe it’s time for vampires who look like catalogue models and do nothing more risqué or outré than climbing a gigantic Washington pine tree to soak in the beauty of nature. If nothing else, Twilight satisfies the apparently boundless desire to watch vampires and beautiful young women, immortalized doubly in cinematic artifice, consumed by the blood-drinking lens of the camera