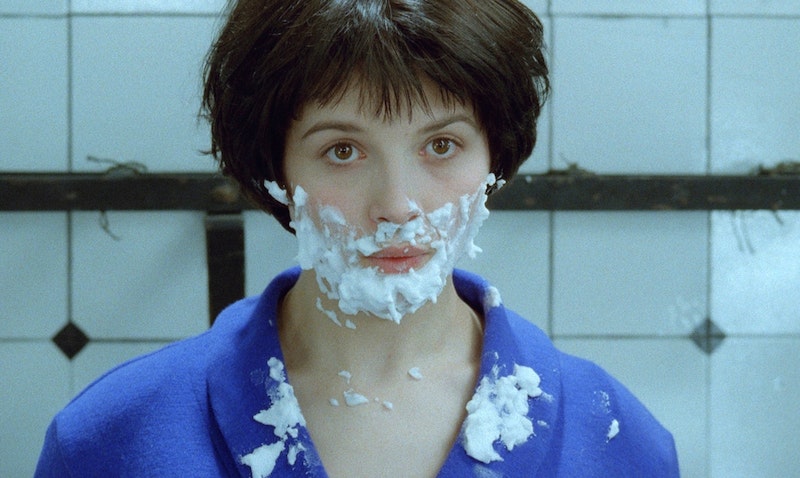 Mauvais Sang has a set up: ostensibly centered on gangs, unpaid debts and a heist to absolve them, a mysterious epidemic and its cure—but these are incidental details in a movie all about love.  Denis Lavant plays Alex, the son of a recently deceased former associate of Mark (Michel Piccoli) and Hans (Hans Meyer). Mark and Hans owe money to a woman named “the American,” and they don’t have much time to settle up –in fact, they suspect that their recently deceased associate has been bumped off by the American for his failure to deliver.  The plan is to steal the cure to a new STD which is spread by those who have sex without love. Mark recalls that their recently deceased associate had a son—Alex—with deft hands, and decides they’ll recruit him for the job. But again, this is all just dressing around the core: a tale of love.

Alex had been estranged from his father for years, and he has his own plans he’s about to set in motion.  He has a girlfriend, Lise, who loves him; he, in turn, does not love her. He’s feeling aimless, about to skip town and travel towards the coast. Mark catches him before he goes, but realizes he’s misjudged both Alex’s relationship with his father and his ability to be motivated by a cash reward. Alex leaves behind a letter for Lise; he turns over his apartment full of books to his friend, and he would leave Paris to become a memory, if only a young woman (Juliette Binoche) riding the bus had escaped his attention.  But he sees her, and he’s doomed.  On his way out of Paris, he ends up at Mark and Hans’ place, the young woman he saw earlier, Anna, is there, and smitten as he is, he’s got no choice but to stick around and help with the heist.

Mauvais Sang really is about the power of love: unrequited love; the illogic of love, how you can’t choose who you love. Love as pleasure and pain. Lise loves Alex, Alex loves Anna, and Anna loves Mark. Lise remains committed to Alex even after his goodbye letter and abandonment. She loves him selflessly, desperately; he is young, she is even younger.  Alex cares for Lise, but Anna is the one who ignites the spark within him.  His love for her overwhelms his body and soul, she’s so near yet impossibly out of reach. She’s walled off from him forever, completely in love with and absolutely devoted to Mark, the man who’s responsible for bringing Alex into their world to begin with. Love as pleasure, love as pain. Love is tragic, love is pure. Each person’s feelings of love for the other are undiluted, but in the end it’s just not enough. For any of them.