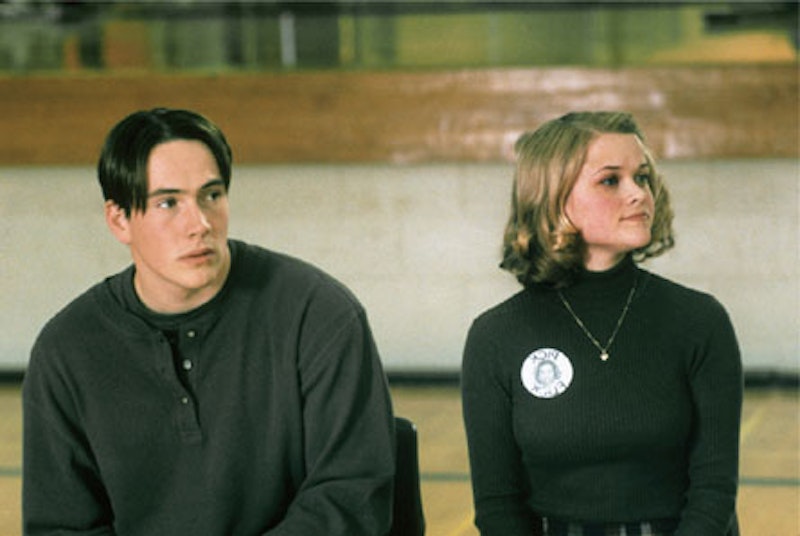 This is the 14th post in a series on political films. The 13th, on Bulworth, is here.

An over-achieving perfectionist control freak female candidate is robbed of the position she's planned for all her life by a Johnny-come-lately unqualified man of the people. That's the story of the 2016 election. But it's also the plot of the 1999 Election, an eerily prescient film about a campaign for student council president in Omaha.

Election isn't on the nose in every respect. The Johnny-come-lately in the film, football hero Paul Metzler (Chris Klein) is clueless but sweet. He's so determinedly altruistic and decent that he votes for his rival, since checking the box by his own name would be too egotistical. Uber-ambitious Tracy Flick (Reese Witherspoon) may foreshadow Hillary Clinton, but Paul's a poor analog for belligerent bully Donald Trump.

But if there's no Trump in Election, the film nonetheless nails the dynamics of his resentment politics. It does so mainly in the person of social studies teacher Jim McAllister, played brilliantly against nice-guy type by Matthew Broderick. Jim has convinced himself he’s a happy, good person. But his vague decency is a thin veneer over a bland but potent core of entitlement, inadequacy, and vindictiveness.

Jim's friend and colleague, Dave Novotny (Mark Harelik) had a sexual relationship with Tracy Flick, for which he was fired. Jim says he doesn't blame Tracy—she's a kid, Dave's a grown-assed man. But in fact he hates her, and lusts after her, and, as a result, wants to punish her. When his own marriage disintegrates because of his infidelity with Dave's ex-wife, his need for a scapegoat mixes with his hatred of Tracy, and he impulsively rigs the election, tossing out a couple of ballots to ensure Paul's victory. Jim's personal disaster fuels his misogyny, which turns into political action. Tracy's ambitious, she's a woman, and so she must be destroyed.

Jim isn't just motivated by misogyny, though; he also resents Tracy (and desires her) because she's young. Tracy, in a tightly-wound and prim voice-over, suggests that Jim envies her. And, as in most things, she's right. Jim wants to hurt her because he sees her future as brighter than his tedious present of teaching civics to bored kids, year after year, world without end.

Jim isn't alone; the whole Carver school bureaucracy is organized around mistrust of, and resentment of, students. This is demonstrated by Tammy Metzler (Jessica Campbell), Paul's sister, who also decides to run for student president. Tammy doesn't really want to be president; she's getting back at her girlfriend, Lisa (Frankie Ingrassia) who dumped her for Paul. Tammy, a closeted lesbian, is especially attuned to the hypocrisies, and intolerances of the status quo, and her campaign speech is a pointed, Jill Stein-worthy indictment of the limits of establishment electoral politics.

"Who cares about this stupid election? We all know it doesn't matter who gets elected president of Carver. Do you really think it's going to change anything around here? Make one single person smarter or happier or nicer? The only person it does matter to is the one who gets elected. The same pathetic charade happens every year, and everyone makes the same pathetic promises just so they can put it on their transcripts to get into college. So vote for me, because I don't even want to go to college, and I don't care, and as president I won't do anything. The only promise I will make is that if elected I will immediately dismantle the student government, so that none of us will ever have to sit through one of these stupid assemblies again!"

Tammy's speech receives a massive ovation… and then the school administration immediately takes steps to prove her and her fanbase right. The principal, Walt Hendricks (Phil Reeves) is fuming; he feels Tammy has made the school look bad; he sees her statement of political dissent as a threat to order and a personal insult.  He demands she be barred from the election. Good old ethical Jim demurs, pointing out that they can't bar Tammy from the ballot just because they dislike her speech. Walt reluctantly agrees—and instead decides to suspend her. Jim voices no objection, and so Tammy is duly punished for the crime of being a student and voicing a thoughtful political critique.

In some ways, Election is in line with the majority of American films, in that, as Tammy points out, the campaign in question doesn't engage any substantive political issues. The candidates are separated by personality, not ideological commitments. Paul's excited about the idea of creating a really nifty haunted house for Halloween—hardly a controversial platform.

Election isn't about corruption. Tracy and Paul are both, in their own ways, ambitious, but their ambition is focused on status and advancement and on really cool haunted houses, not on money. Tracy tears down Paul's posters in an excess of frustration and spite, it's true. But she'd never steal money from a campaign chest.

Jim doesn't rig the election for money either. Rather, he's motivated by personal animosity—and identity politics. He crumples up Tracy's ballots, throwing the election to Paul, as an act of male solidarity with his banished colleague, and as a blow against all the women in his life who he feels have done him wrong. Similarly, when the principal punishes Tammy, he does so to put her in her place—a place defined by her age, and perhaps her gender as well.

Politics in Election isn't about money, and it's not about differences in policy—at least, not directly. Instead, for the white, older men who run the school, politics, or the exercise of power, is about maintaining order, and keeping uppity girls in their place. Luckily Jim is foiled; Tracy and Tammy both go on to at least provisional happiness, unfazed by the men who try haplessly to crush them. The film is a comedy because the misogynist assholes lose. We'll have to wait till November to see if that optimistic prediction is prescient as well.