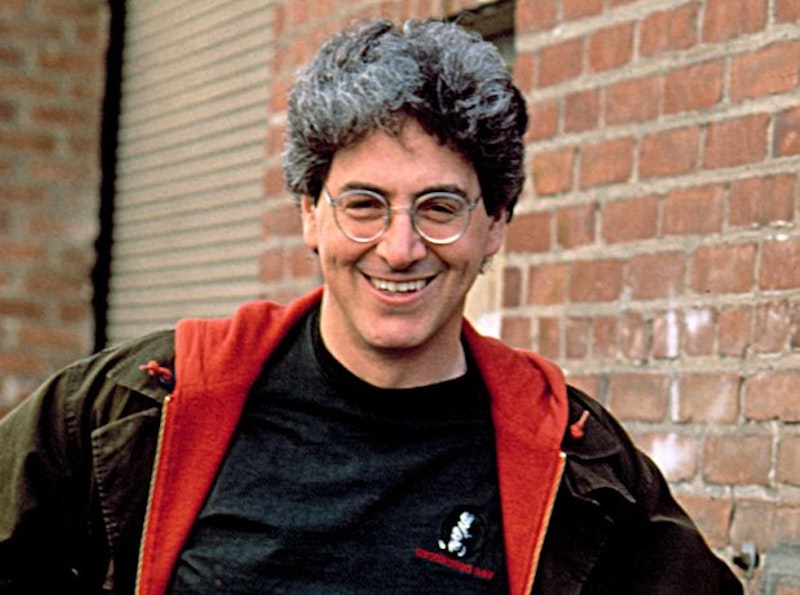 Yes, Harold Ramis had a magnificent resume in baby boom comedy. For six years he did his part in one giant Hollywood yuck explosion after another, the late 1970s/early-80s chain of gross-out comedies that started with Animal House (Ramis was a co-writer) and continued with Caddyshack and National Lampoon's Vacation (Ramis directed both) before climaxing in the mighty Ghostbusters (of which Ramis was co-writer and co-star). Tossed in there are the smaller but still significant Meatballs and Stripes (as with Ghostbusters, he was a co-writer and co-star).

Of course, Ramis was not the reason these films became a success. Nor did he supply the visions they conveyed. I don't say those visions were necessarily so great, but they marked off the films as something new, as a collection of pop-culture landmarks indicating the birth of an era—that of the baby boomers as Hollywood comedians. For Animal House, the vision came from Douglas Kenney and Chris Miller, who turned their stories for the National Lampoon into a script. For Vacation, the vision came from John Hughes, who had written his own bunch of stories for the Lampoon and now made these a movie. For Ghostbusters, the vision came from Dan Aykroyd, the script's co-writer and a nut about parapsychology.

Add these visions up, take account of all the cupcake blondes involved and the blustering pencilnecks and the eruptions of goo, and it's clear that American comedy was going through a stupid kind of revolution, a dimmer replay of the overhaul that pop music received during the mid-1960s. The baby boomers had taken over Hollywood comedy, and Hollywood comedy was made drastically more comfortable for horny teenage boys who were nursing a grudge against society until somebody sucked them off. But this revolution was not really Harold Ramis' deal. When he stopped working on other people's projects and made his own, he directed one of Hollywood's few really good movies about middle age. This is Groundhog Day, a gimmick comedy that doubles as a parable about making your life worthwhile when you're bored to death and realize nothing is going to change. Ramis didn't write it (that was Danny Rubin) but he chose the script and reworked it.

Groundhog Day came out 21 years ago and was flagged as a classic-to-be by William Goldman, who wrote Butch Cassidy and the Sundance Kid. Goldman was right. Admittedly, the film's spirituality is the sort that pays off in a lot of ego boo. Bill Murray, as the hero, realizes he's found enlightenment when everyone in town makes a fuss over how wonderful he is. (For the record, Noah Berlatsky is the one that pointed this out.) Okay, such is Hollywood. Groundhog Day is still one of our few recent movies that can be watched from decade to decade as a genuine pleasure, not as a hoot.

Aside from Groundhog Day, Ramis' projects as auteur are pretty thin. Multiplicity with Michael Keaton? Ramis' Bedazzled is better than the original, which starred the frequently great comedy team of Peter Cook and Dudley Moore. But the original was not so good, since this time out Cook and Moore gave being great a miss. The new Bedazzled was solid work but that's all, and the hero's spiritual firming up seemed routine next to Murray's in Groundhog. The difference, if I recall right, was that Murray's character was allowed to learn enlightenment step by step, whereas Brendan Fraser's character was trapped by the basic gimmick of Bedazzled, the decision to pin a different segment to each of the seven deadly sins. The character got played for a sap seven times in a row, at which point he was allowed to realize his folly all at once. After that he shook his head and smiled to himself at his cloddish, bygone ways.

Even so. Harold Ramis made two Hollywood comedies about overcoming desire and the traps of illusion. He did this after taking part in a film revolution dedicated to the desires and egotism of possibly the most desirous and egotistical of all demographic tranches, the teenage American boy. A journeyman moviemaker, he still managed to combine Bill Murray with the Dalai Lama. He'll always have that going for him.