Justified Has No Hero

And Sam Elliott is fantastic. 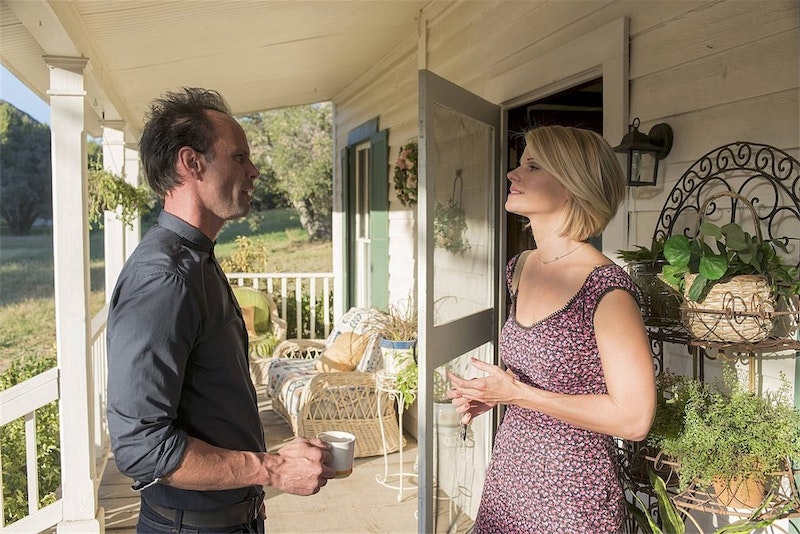 Now that Justified is in its sixth and final season, the general consensus is that this was always a show about Raylan and Boyd’s final shootout (all the pre-season promos were framed as classic Western duels). If Justified were true to the Elmore Leonard books, Boyd would have died back in season one. Reading the reviews now you’d think all the seasons were just stalling (some more successfully than others). Certainly when Boyd kills Dewey Crowe at the end of the season six opener, we’re meant to understand that it’s all business from here on out—no more time for Dewey’s hijinks or sentimentality. Boyd wants out, Rayland’s looking to bust him.

When a still-ailing Art tells Raylan that maybe, now that he has a wife and baby in Florida, going after Boyd just isn’t worth it—“Or Raylan, there’s another way it goes, where you try and you fail… and the bullet finds you…”—Raylan is unconvinced. He knows this is the last thing he needs to do before leaving Kentucky; he’s freed Ava from jail as a CI and is working with Rachel on a RICO investigation. Boyd, however, is partnered up with Katherine and Wynn Duffy on one last heist, which turns out to be against one of Harlan County’s most notorious Big Bads, Avery Markham (played with exceptional ruthlessness by Sam Elliott). “I ain’t backin’ down,” Boyd tells Katherine. “I’m gonna rob him… and then I’m gonna stick a bullet in your boyfriend’s head.”

If Boyd’s motivations are a little harder to understand, it’s obvious both he and Raylan would be better off letting this one go. In the most recent episode, after Markham comes to threaten Boyd, he tells him, “Come to it, I guess you ain’t all that big now. Grown, but still just playin’ pretend.” I like the parallel with Art’s earlier speech. Raylan and Boyd, both overly sure of themselves, and overly sure of how this will go down.

I’m not at all sure how this will go down. We’re too far along now to think that Raylan is the hero—remember that Justified opens with Raylan killing an outlaw rather than arrest him. Art’s right that Raylan shouldn’t be wearing a badge; arguably he deserves to be in jail almost as much as Boyd does. And if the past five seasons have shown anything it’s that Justified is more Boyd’s show anyway. I’m sure I’m not the only fan who thinks that. I don’t know where Ava’s allegiances lie now, but I’m more invested in Ava and Boyd than Raylan and Winona. So as this final season starts up, at least it’s exciting not knowing who will make it out, or who deserves to.