And then try to pretend Russell Crowe doesn’t suck. 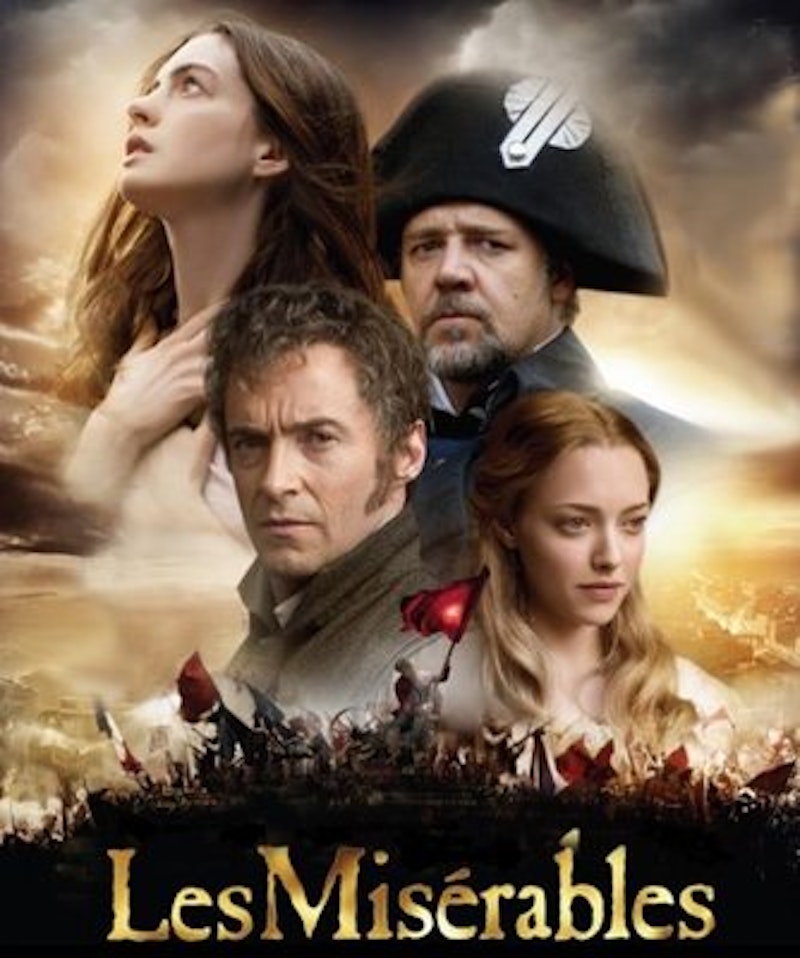 Like many theater enthusiasts, I cringed upon hearing about the release of the film version of one of my favorite Broadway musicals. Oh God, I thought, they’re going to Chicago it. Lip-syncing by actors who shouldn’t even be doing that. Help me, Patti LuPone. This is going to be awful.

But then I read the December Vogue article about the movie, complete with Annie Leibovitz photos and an interview with Anne Hathaway (Fantine), who lost 25 pounds, her hair and two teeth for the part after begging director Tom Hooper (last year’s Oscar winning director for The King’s Speech) to audition for it. And I thought: Oh, fine. I'll give it a chance.

So I went to see Les Miserables on its opening, Christmas Day, and am glad I did. It’s phenomenal. The 19th century tale of the fate of the poor during the French Revolution has been done justice in this cinematic version. Broadway fans will find that the loss of the live experience is traded for the power of film in closely capturing raw emotion.

I had sort of gotten over the Hathaway “she’ll always just be cute like in Princess Diaries” when she was fantastic in The Devil Wears Prada, but I had no idea Hathaway had the ability to act and sing until every person in a packed movie theater cried. Everyone. If her version of “I Dreamed a Dream” (filmed whole, in close-up; no lip-syncing in this movie) doesn’t make you cry? You are a very cold person. It’s a shame she doesn’t have enough screen time for a Best Actress nod, but she may as well clear a space on her mantel for the Best Supporting Actress golden statue.

Ditto tears for the version of “On My Own” by Samantha Barks (Éponine); the girl is amazing. Perez Hilton declared “Samantha Bark SLAYS as Éponine!” and other than spelling her name incorrectly, he’s completely correct.

Rounding out the rest of the female cast is Amanda Seyfried as Cosette, and ho-hum with her lame songs and part; she’s there just to be pretty and sing the high notes, and she’s fine. Helena Bonham Carter as Madame Thénardier is spot on alongside her male counterpart Sacha Baron Cohen as the “Master of the House.” If you’re a fan of this musical number (as I am), you won’t be disappointed.

Every theater geek girl knows there are way better parts for boys in Les Mis. Eddie Redmayne knocks the role of Marius out of the park. At first, I thought he was too pretty, but then he had me at “Empty Chairs at Empty Tables,” and once again I was grabbing for the popcorn napkins I’d luckily grabbed tons of because I knew the Kettle Corn seasoning would make my fingers a mess.

Also, I saw the Facebook post of a friend of mine who reviews movies over at the Washington Post, and she said parents of younger children need to keep in mind that the shooting death of the young Gavroche character is very graphic and eerily timed in wake of the Connecticut killings. I agree the scene is heart-wrenching (the performance of Daniel Huttlestone is amazing) and I too recommend parents heed the PG-13 rating.

Now, for the two main men: Hugh Jackman as Jean Valjean and Russell Crowe as Javert. My immediate thought upon hearing the casting: Wolverine and Gladiator? Really? Turns out I was wowed by one, completely disappointed by the other.

On Hugh Jackman, Adam Greene in Vogue says it best: “There are zero other performers who combine Jackman’s good looks, charisma, acting talent, and box-office clout with an ability to sing and dance like nobody’s business.” Jackman is flawless. Another make-room-on-the-mantel performance. I’d bet good money on him for a Best Actor Oscar, though I’m sure Daniel Day-Lewis (Lincoln) will give a run for my money.

And luckily Russell Crowe already has a Best Actor Oscar (he’s probably polishing it right now to remind himself of this fact) for Gladiator, because I thought he was absolutely underwhelming as Javert. He had a deer-in-the-headlights look on his face throughout the film, as though he was surprised when someone told him he had to sing all his lines. I know Hathaway and Jackman banked countless hours with the voice coach during the filming, and I’m sure Crowe must have, too, but his performance didn’t reflect it.

Crowe wasn’t commanding or intimidating enough for the powerful role of Javert and in the singing department, he was weak; significantly weaker than Jackman, who clearly had to “sing down” to his level in their duets; a true shame, since those moments pack a punch onstage and the musical theatre fans know it. I’ve read no reviews of this movie—maybe everyone’s talking about how fantastic Crowe was, but I just didn’t see it.

Overall, the film’s a winner—absolutely worth a trip to the theater over this holiday season to enjoy it. And bring tissues, because those movie popcorn napkins are awful for mopping up tears.