When it comes to House of Cards, I'm Biclaireious. 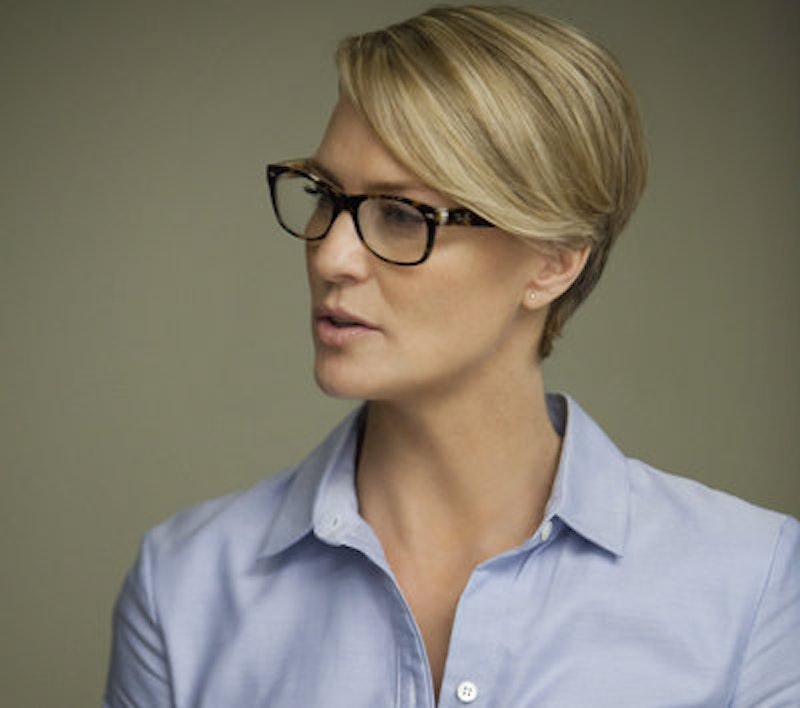 Although technically a straight married woman, I followed with interest the recent Tweet/Facebook status of an awesome lesbian blogger I’ve long admired for her brains and wit. She mentioned resisting the Netflix drama House of Cards for a while but that now all she wants is Claire Underwood in those tailored oxfords. Claire (played by actress Robin Wright; she was also Princess Bride and Jenny in Forrest Gump) is main character Vice President Frank Underwood (Kevin Spacey)’s wife, and a political lobbyist.

Season Two of House of Cards descended in Netflix’s whole-season form on Valentine’s Day. I know many people who spent that entire weekend eating the season like a bag of potato chips, never leaving home or getting out of sweatpants, ordering pizza online, like any good season of a well-written show should be consumed. Only because my husband prefers it this way, I have been doling episodes out one a time in a torturous one-episode-a-night format.

When I saw Vikki’s Facebook post, I nodded in agreement. Those oxfords. The glasses. The comments raged on with passion: “sex on a stick,” “that hair,” and my personal favorite, “You can drink unicorn tears out of the indentations in her clavicles,” plus links to something called “She’s so hot she’s making me sexist” and one about the fact that she wears Spanx as Claire.

I found myself chiming in and listing all the amazing things about Claire, and the blogger noted it was the “age-old lesbian question: Do I want to BE her or DO her?” I responded with enthusiasm “Both” and that “I guess this makes me Biclaireious.”

Any straight girl would be lying if she didn’t admit to some attraction to some other woman at a point in time. And many girls are lying to themselves otherwise. I admitted to my girl crushes in my piece about Amy Adams’ perfect tits. Could I be criticized by the feminists for objectifying women? Shit yeah! Can’t figure out how a woman pointing out how awesome another woman is anti-feminist, except that I guess we aren’t supposed to ugly-shame, which is probably a thing I’m fucking up right now.

But we’re noticing how hot Claire and Amy are because they’re phenomenally talented actresses. We wouldn’t have a chance to notice the details of clavicles if we weren’t watching show after show after show, especially on a good series (see also: Orange is the New Black).

So I’m coming out as Biclaireious, world. Some girls are hot. No shame.