Owen Kline’s Funny Pages is a nicely lacerated movie about not going to college. 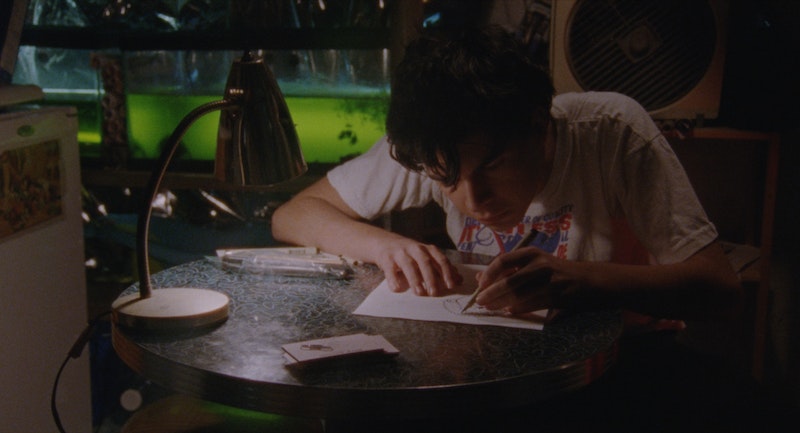 Another cycle of “memory movies” by major directors past the age of 50 is coming to a close: this one started with Roma in 2018, continued with Once Upon a Time in Hollywood, Belfast, Licorice Pizza, and will continue for at least another couple years, with Steve Spielberg’s The Fabelmans and James Gray’s Armageddon Time ready for release this fall. But like all waves in popular filmmaking, it’ll break soon—how many trends like that last longer than five years? On the day I saw Funny Pages, writer/director Owen Kline’s debut feature, I also re-watched Almost Famous with my parents, at my dad’s suggestion. It’s a fine movie, sweet enough and cliché-ridden, but what struck me was how relatively young Crowe must’ve been in 2000 when it was released—43, admittedly older than I thought, but certainly not in his “late period.” Almost Famous is not Amarcord, nor Once Upon a Time in Hollywood, but it has frames of the same grace that those films do.

Not that Funny Pages fits into that trend, unless you consider a young man on the edge of 30 looking back at turning 18 and moving out of his parents’ house enough of a gap to qualify. Who knows how much of Funny Pages is autobiography, and who cares, the rough contours are there: an obsession with comics and drawing and a comfortable upbringing in New York City. Daniel Zolgahdri plays Robert, an underground comics fanatic who not only doesn’t want to go to college, he doesn’t want to finish high school (one semester). He tells his stunned parents (Josh Pais and Maria Dizzia) that he’ll just get his G.E.D. and find a place in Trenton. He’s out on his ass in short order, with a little help from his boss at the comic book shop, who gives him a good deal on an old, crappy car.

Life doesn’t quite lift off: the apartment he rented is a squatters’ boiler room, although Robert’s friend Miles (Miles Emmanuel) is impressed. Funny Pages resembles plenty of coming-of-age and autobiographical movies in "broad strokes”—like Robert’s martyred art teacher Mr. Katano (Stephen Adly Guirgis) insists upon at the beginning—but it sits at the same ambient anxious frequency as the work of producers Ronald Bronstein and Josh and Benny Safdie. While reaching for comparisons, most people will probably go for Uncut Gems—Funny Pages has a few familiar faces from that movie—but it’s a lot closer to the Safdies’ Daddy Longlegs, and even Bronstein’s masterpiece of punishment, Frownland. This movie may be about an 18-year-old American kid “figuring out what to do with his life,” but it’s also bookended by shocking and violent accidental deaths.

Robert’s teacher, and then his best friend, are impaled: he isn’t directly responsible for either incident, but he creates the situations that lead to their deaths (Miles’ fate is left unclear, because even after roaring like an animal with a spike stuck through the back of his head, he’s unfortunately conscious and alert). Both of them are impaled by pieces of wood that look like giant, grotesque pencils. Despite the universe telling Robert that what he’s doing is violently killing the people that care about him most, he still runs back to the comic shop. Ghost World is not an accurate comparison here, because even Louise Lasser’s brief but excellent cameo as an irate pharmacy lady (“GIVE ME A PERCOCET, YOU SCHMUCK!”) is far more unnerving than anything Steve Buscemi and Thora Birch did in that other comic book fantasy.

Scattered among familiar beats are jagged edges that will really upset people who gravitate towards movies with posters like this. Particularly the lousy roommate situation, another setup you’ve seen a million times, but to Michael Townsend Wright’s credit, his performance as Barry is fucking disgusting—this man can eye-fuck you through the screen. It’s not fun. It’s only one thing that makes Funny Pages very good, and often very upsetting. With a head full of dreams and steam, Robert runs out of his parents’ house right into a brick wall. That feels a lot more familiar to me.