It's Not About Spirituality. It's About Torture.

Men Who Stare at Goats might be a faithful adaption from John Ronson's original text, but blithe references to Abu Ghraib and torture threaten to undermine the whole film. 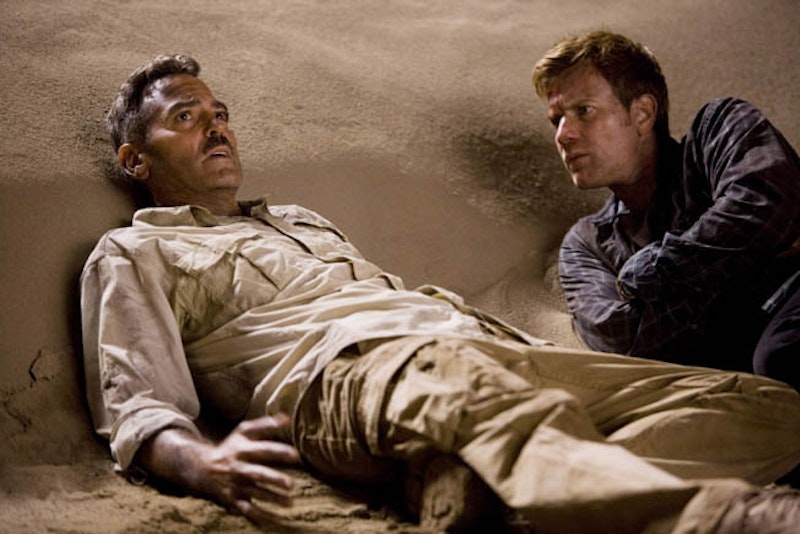 Some books just seem designed to be turned into empty-headed, feel-good Hollywood movies. Jon Ronson’s The Men Who Stare At Goats isn’t one of them. Indeed, you have to wonder what Ronson was thinking the first time he watched Clooney, Spacey, Bridges and McGregor mug their way through an hour and half of feeble irony and vague spiritual uplift. No doubt the author was paid well, which is always a comfort—but even if he physically covered his eyes with his wallet for most of it, I’d imagine the screening still must have hurt.

Not that the guy didn’t set himself up for it. Ronson has an obvious weakness for the gripping premise and the cutesy dramatic twist. The Men Who Stare at Goats is reported non-fiction—but of the narrative, punchy, I-would-really-like-a-big-audience-here variety. The book opens (like the movie) with the sad tale of a high-ranking army officer determined to walk through his wall into the next office, with predictable slapstick results. From there, it marches briskly off into a familiar world of conspiracy nuts and gullible New Age visionaries, though these nuts and visionaries are distinguished by the fact that most of them are in the army.

The first part of Ronson’s book, then, is a mostly cheery, low-key satire of the military’s efforts to create “psychic spies”: folks who can see events at a distance, predict the future, influence their opponents emotional state, walk through walls, and kill goats (or, at least, stun hamsters) just by staring at them. The center of all this hoping and staring is Jim Channon, a Lt. Colonel turned seeker, who, scarred by his experience in Vietnam, sets out across California in search of New Age techniques to make the army more “cunning.” The result was “The First Earth Battalion Operation Manual,” a booklet intended to transform the army by introducing creativity, spirituality, and non-lethality into the military repertoire.

Ronson claims that Channon was the one who coined the incredibly successful army slogan “Be All You Can Be.” He also gives Channon credit for influencing the army’s effort to develop a range of non-lethal techniques, including sticky foam: a quick-hardening foam that, it turned out, wasn’t actually all that useful.

The key people Ronson quotes as testifying to Channon’s ubiquitous influence are, as far as I can tell, his friends and fellow travelers, not to mention Channon himself. It hardly matters, though, because despite Ronson’s occasional assertions to the contrary The Men Who Stare At Goats isn’t really about Channon or New Age spirituality or goats. It’s about torture. The line between developing psychic powers to influence the minds of others and using psychological torture to influence the minds of others is, as it turns out, not especially well defined. For example, Ronson raises the disturbing possibility that the torture sessions at Abu Ghraib were not inexplicably and stupidly photographed, but rather deliberately photographed as a psychological warfare technique. The piles of naked men were staged and documented, Ronson suggests, at the order of intelligence personnel, so that the pictures could be used to break the will of other prisoners.

But it’s more than fair to say that showing such images to prisoners would enrage them—and the world at large—and make them less likely to cooperate. As Ronson points out, though, merely because a technique is stupid or ineffective or both is no reason to believe the military didn’t employ it. Many of the creative interrogation methods he discovers are, in fact, ridiculous. Ronson recounts, for example, that in Iraq the Americans apparently put Iraqi prisoners in shipping containers and played them songs such as the Barney theme over and over. This story was picked up by a number of major media outlets that all treated it, understandably, as a lark. The Barney song: it’s torture, just like all parents suspected!

It’s a good joke. But is evil less evil just because it’s ridiculous? One of the most diabolical scenes in the book doesn’t occur in a torture chamber or in a warzone, but in a friendly interview with Christopher Cerf, a longtime writer of Sesame Street songs like “Put Down the Ducky.” Some of Cerf’s jingles seem to have been used in interrogations, and he and music supervisor Danny Epstein joke and riff on the idiocy of the military (“Put Down the Ducky” could be used to interrogate members of the Ba’ath Party, they suggest) and the possibility of collecting royalties from the government. As Ronson notes, though, “The conversation seemed to be shifting uneasily between satire and a genuine desire to make some money.” Cerf and Epstein, in short, think the government is ridiculous and the war on terror a joke, but their humor has no moral edge. They don’t care that their songs, intended for children, are being used to torture human beings; on the contrary, they’d like to turn a profit on that torture. Their laughter is what James Baldwin called “the laughter of those who consider themselves at a safe remove from all the wretched, for whom the pain of the living is not real.”

This is the central tension of the book. On the one hand, Ronson is obviously going for laughs; I mean, it’s called The Men Who Stare at Goats. On the other hand, over the course of the narrative, he seems to gradually realize that there’s a serious moral problem with packaging this stuff as entertainment. The last section of the book is devoted to the story of Eric Olson, whose father, Frank, fell out of a window and died in 1953 when Eric was nine. Eventually, it was revealed that Frank had been involved in CIA experiments with LSD—he had been tripping, and accidentally killed himself.

The media, of course, loved the story. LSD, government fuck-ups, what’s not to like?  It’s perfect except that, after a lifetime of investigation, Eric has uncovered a lot of evidence indicating that it’s simply not true. According to Eric, Frank wasn’t tripping when he fell to his death. Instead, he was thrown out of the window by CIA operatives who wanted to silence him because he was planning to go public with secret, brutal details of a clandestine CIA torture program.

Eric’s story didn’t gain a lot of media traction. In conversation with Ronson, he noted, “The old story is so much fun … why would anyone want to replace it with a story that’s not fun.” Ultimately, for all its goofy details—subliminal messaging, UFO speculations, generals walking into walls—Ronson’s book isn’t especially fun. Instead, it’s a familiar and depressing story. If you give people vast amounts of power over one another, they’ll do some things that are silly and a fair number that are monstrous. And, in the end, justice doesn’t triumph, evil is not uncovered, people are tortured to death, and nobody gives a shit unless they can turn it all into a clever one-liner at the water-cooler. Or, I guess, into an uproarious Hollywood movie starring George Clooney.