On the Pitch, Nearly Perfect

The Damned United tells a familiar story with gusto, humor, and energy. (Grade: A) 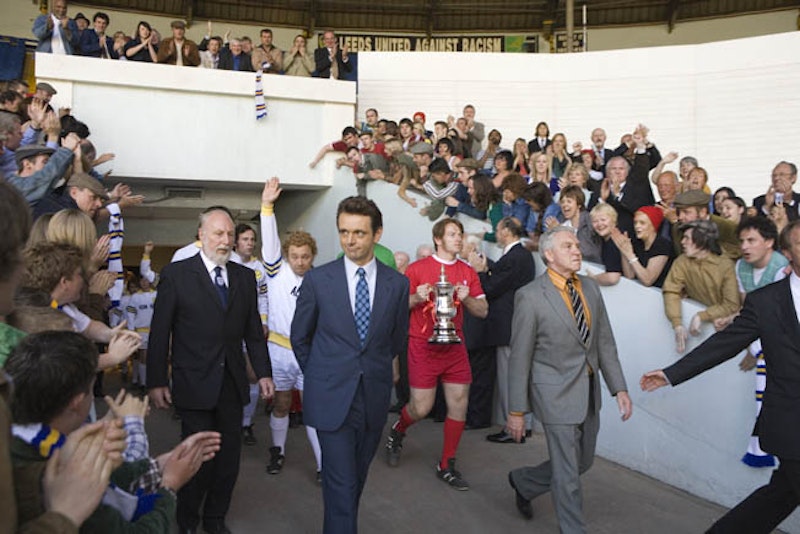 Without the context of British club football to anchor it, Tom Hooper’s new rise-and-fall drama The Damned United would be a well-acted but familiar story of male hubris and outsized ambition. But it’s the football—not just the on-field action, but the whole culture surrounding the teams and their relation to communities within Britain—that makes this film a near-masterpiece. Here’s a film that’s less about numbers, wins and losses, and more about why people follow sports in the first place. Its protagonist, the egomaniacal but talented manager Brian Clough (Michael Sheen), is compelled to greatness by the things that make sports fun—mainly the military-esque qualities, like competition and chest-beating—but he lacks an appreciation for the things that make sports poignant, particularly the way they engender camaraderie and shared purpose.

The Damned United tells two stories simultaneously, an unnecessary gambit that nevertheless works, lending some serious narrative momentum to a plot that will hardly surprise anyone. So we meet Clough (described by one thickly accented groundskeeper as a man who “never stop[s] fuckin’ tawlkin’”) first in 1974, right after he’s selected as the new head coach of Leeds United, then again, in 1968, when he’s the ambitious coach of second-tier Derby County. In the intervening year, Leeds became the undisputed kings of English football, and their beloved coach Don Revie (Colm Meaney) achieved a nearly shamanistic reputation among fans and players. Clough’s success with Derby was hardly less impressive, bringing the team to the top of the First Division and very nearly into the European Cup, but nearly all his competitive drive stems from a perceived snub by Revie in 1967; no other victories will suffice if his club can’t beat Leeds, and in one particularly grueling sequence, he risks his players’ health and their shot at a Euro Cup qualification for the chance to squash his rival.

The Damned United is all but flawless, even exhilarating. Hooper tells his story in big, quick scenes, which provide consistently meaty opportunities for his actors. Sheen and Meany are both excellent as always, and the great Timothy Spall plays Peter Taylor, Clough’s friend and longtime assistant and the perfect foil for his boss’ grandstanding megalomania; Spall and Sheen’s depiction of a friendship-through-sport is the heart of this film, and the most affecting onscreen male partnership I’ve seen since Anvil! And Jim Broadbent shows up in a few key scenes as the Derby owner Sam Longson, who grows increasingly frustrated with Clough’s selfish approach to the game.

Ben Smithard’s cinematography overreaches at times, particularly in a few scenes where hyperactive editing is used uncreatively to build tension but, for the most part, The Damned United is shot gorgeousl ywith attention both to the actors’ faces and to genuinely painterly compositions. There are moments of stark, dark intimacy, as well as a beautiful, airy sequence in Majorca, and Hooper allows the visuals to assist his storytelling rather than subordinating the photography to an afterthought. The northern England scenes are so evocatively wet and cloudy that Clough and Taylor’s second-act trip to sunny Brighton indeed seems to warrant their initial despair: “We’re almost in France!”

But it’s character, not style that makes The Damned United so engaging and affecting. Once Clough begins managing his ex-rivals in Leeds, he stumbles into the worst record of his career and the club’s worst start in decades. He’s a familiar movie archetype—the man who thrives more on self-imposed difficulty and rivalry than the specific aspects of his trade—but he’s still a dynamic presence as embodied by Sheen, and a recognizably flawed man in his relationships. The mechanics and strategies of football are important to this film, though not as important as the sport’s more universal qualities; Clough fails to earn the respect of his Leeds players because he has no interest in the difficult science of team-building, only self-satisfaction with his new appointment. The Damned United isn’t only a film about one sport (though the field-level shots of the crowd ably demonstrate the pressures that these athletes and coaches must feel to please entire cities who depend on them for self-identification), but a film about why sports hold such an esteemed, important place in the cultural consciousness. It depicts, with no small degree of artistic panache, the odd state of athletic heroes, who are famous for individual skills but also for their place among a larger group. It’s the perfect setting for an ages-old story about a selfish man’s eventual fall from grace, and the film fulfills its promise in entertaining, visually explosive fashion.