Violence can be oh so cathartic. But when it occurs in the household, there is no justification. 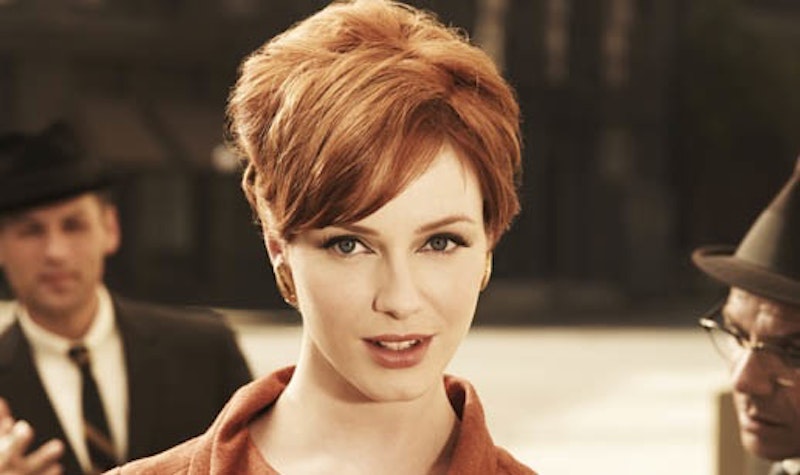 It was the vase smashing heard around the country. Last Sunday night, Mad Men fans everywhere watched in disbelief as Joan Holloway, everyone’s favorite red-haired office bombshell, picked up a vase and brought it crashing down over her husband’s head. The vase had barely shattered before Joan stormed out, leaving her husband gaping and cursing and leaving viewers stunned, then elated and, finally, very conflicted.

Joan, played by Christina Hendricks, is one of the most relatable and sympathetic characters in the critically-acclaimed series. Holloway is the office manager and head of the secretary pool at the fictional firm Sterling Cooper, where much of Mad Men takes place. She’s smart, perceptive and, though her professional opportunities are limited by ideas about “women’s work,” she’s quite clearly a gifted leader. While the series’ characters are far too complex to be reduced to simple archetypes, in many ways Joan represents the middle ground between Peggy Olsen’s second wave feminist careerism and Betty Draper’s traditional, often miserable life as a housewife. Like many women, Joan wishes that the world were a fairer place for her gender, but accepts the reality that, in 1963, office manager-turned-housewife is the best most women can hope for.

Initially, Joan’s journey over the course of the series promised to be a smooth one: After her affair with her boss ended she met Greg Harris, a handsome doctor who could give her the happy ending of suburban matrimonial bliss to which most of Sterling Cooper’s secretaries aspire. Then, during their engagement, he raped her. Despite this, the wedding went ahead, and since the current season of the show began viewers have been treated to glimpses of Joan with her now unemployed husband in their increasingly unhappy home life. Given all this, it’s not surprising that many women—myself included—find themselves rooting for Joan Holloway.

During last Sunday’s episode, Harris came home furious with himself for having botched a job interview and took his anger out on Joan. I expected her to respond with her usual tightlipped composure; instead, she picked up a vase, smashed it over Greg’s head and marched out of the room before he could even register what had happened.

My immediate reaction was one of cathartic joy. It was incredibly satisfying to see Joan expressing the frustration and dissatisfaction that viewers had been feeling on her behalf for so many months. Despite the fact that she resorted to physical violence, I couldn’t help but feel joy and pride at seeing Joan fight back against the man who had raped her and who was now treating her like an inferior, rather than an equal.

It didn’t take long for that satisfaction and joy to morph into uneasiness. On one hand, as John Swansburg wrote at Slate, “it was undeniably cathartic—what fan of this series hasn't been rooting for this guy to be smacked upside the head?” On the other, there’s no denying that what Joan did to Greg was domestic violence, which shouldn’t be condoned under any circumstances. In response to a weekly Mad Men analysis at Feministing (where I also blog) readers expressed their outrage that some of the Feministing bloggers appeared to be condoning or even celebrating an act of domestic violence.

At first, it was tempting to try to justify the joyful reaction, the feeling that justice had been served. After all, the man raped his fiancée. Surely a slight blow to the back of the head was the very least he deserved. And how bad could his injuries really be? Surely they’re nothing compared to the emotional and psychological damage he inflicted on the woman he supposedly loves by raping her? But then I imagined this scene with the genders reversed. I pictured the reaction on Monday morning if Greg, or any other man on the show, had beaten a woman over the head with anything, let alone a glass vase. There would be uproar, and rightly so, because no person, male or female, deserves to suffer violence at the hands of a loved one.

Domestic violence is, in the words of The American Prospect’s Ann Friedman, an “epidemic” in America. While domestic violence against men by women occurs occasionally, women bear the brunt of domestic violence and spousal abuse. According to the Department of Justice’s Office on Violence Against Women, in 2008 there were more than half a million “non-fatal violent victimizations” of adult women by their partners. In 2007, 64% of female homicide victims were murdered by a family member or intimate partner.

Given these statistics, it is clear that the initial reaction of joy at Joan’s smashing that vase over her husband’s head was misplaced. While violence against men by women is rare, domestic violence is obviously a devastating problem in this country in all its forms. Violence begets violence, and abuse begets abuse. Viewed in this light, Joan’s act was not simply retaliation, but the second act in a cycle of abusive behavior.

The unpleasant human truth is that, sometimes, it can be satisfying to watch someone get what’s coming to him or her. But when the punishment for violence is yet more violence and, particularly, gendered violence, there is no endpoint; there is no real justice. There is only epidemic.