And I say that with love. 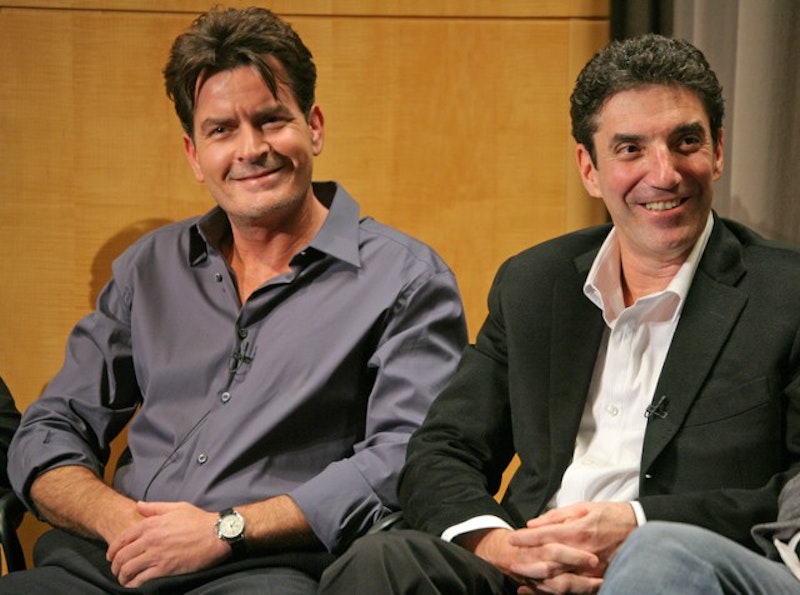 One of the more interesting aspects of the bizarre Charlie Sheen media circus is how quickly it turned from the TV star's own personal cycle of debauchery and insanity to a war with his bosses on Two And A Half Men, the lowbrow sitcom hit that made him the highest paid actor on television. After eight years of hugely successful and profitable work together, Sheen and the show's creator and executive producer, Chuck Lorre, suddenly began publicly sniping at each other, via Lorre's signature vanity card rants at the end of his shows, and Sheen's blitz of radio and TV interviews. And that conflict has culminated first in the show shutting down production for the rest of the season, then Sheen's lawsuit against Lorre and CBS, and finally the announcement that the actor had been fired from his own show (though it remains to be seen whether they'll continue the show without its original star).

At first, it was surprising to see Sheen and Lorre turn on each other. The first seven seasons of Two And A Half Men ran smoothly enough that it could be reasonably assumed that they had a good working relationship. Sheen's character on the show, also named Charlie, often seemed like a parody of the actor's life, a hard-drinking, hooker-loving entertainer who had enough money to live without any consequences for his actions. But the fact that Sheen was playing the character suggested he was in on the joke and not simply mocked by Lorre and his writers. Now, it's not so hard to be sure that was the case.

In a way, this war of words with Sheen is an appropriate place for Chuck Lorre to wind up, since his shows have always circled around people who love and hate each other, or simply hate each other but are stuck with each other. His first big sitcom gig was producing Roseanne, in which the Conner family communicated with each other with barbed sarcasm and rarely gathered at the kitchen table for lessons and heart-to-heart talks like family sitcoms often had before. Lorre's first two shows as a creator, Grace Under Fire and Cybill followed the Roseanne formula of following the matriarch of a family that pulled no punches. Cybill in particular demonstrated Lorre's gift for mean-spirited banter via the title character's alcoholic sidekick, played by Christine Barankski.

Lorre's biggest misstep as a creator, the cutesy Dharma & Greg, was also his most good-natured show. But he really found his voice with Two And A Half Men, a show about two polar opposite brothers who live with each other and hate every minute of it, and are constantly clashing with their mother, housekeeper, exes and other relatives. The show gets a bad rap for being vulgar, old-fashioned and mean-spirited, but those are exactly the qualities that have made it one of TV's greatest pleasures for the past few years, the closest thing network sitcoms have to an heir to Married With Children.

In recent years, Lorre created another hit, The Big Bang Theory, and produced Mike & Molly, neither of which is as nasty as Two And A Half Men nor as sugary as Dharma & Greg. But Theory in particular explores the passive-aggressive tensions between four nerdy friends who tolerate each other's company more than they enjoy it, but still band together out of common interests and, perhaps, lack of alternatives.

Even as conflict and love-hate relationships have been recurring themes of Lorre's shows, it's been a persistent theme of his history, in part because Sheen is hardly the first unstable or tempestuous star he's worked with. Roseanne Barr was infamous for firing writers even before she started working on Roseanne, and Grace Under Fire star Brett Butler's personal problems and work issues resulted in many cast and crew changes aside from Lorre's early exit from producing the show he created. Lorre also frequently clashed with Cybill Shepherd, who eventually fired him. No controversy ever seemed to arise from the set of Dharma & Greg, but star Jenna Elfman turned out to be a pretty hardcore Scientologist, so there's no guessing what Lorre may have had to deal with behind the scenes.

It's possible that Chuck Lorre is as big a jerk as Charlie Sheen or any of the other ornery actors he's butted heads with. And it's also possible that his characters, which constantly zing each other with savage putdowns and barely conceal their mutual contempt, aren't based on any of his own experiences. But at the moment it feels like life is imitating fiction closely, and that Lorre has at the very least had bad luck ending up time and time again working with notoriously troubled stars. So here's hoping for his sake that everybody on The Big Bang Theory and Mike & Molly is a joy to work with.