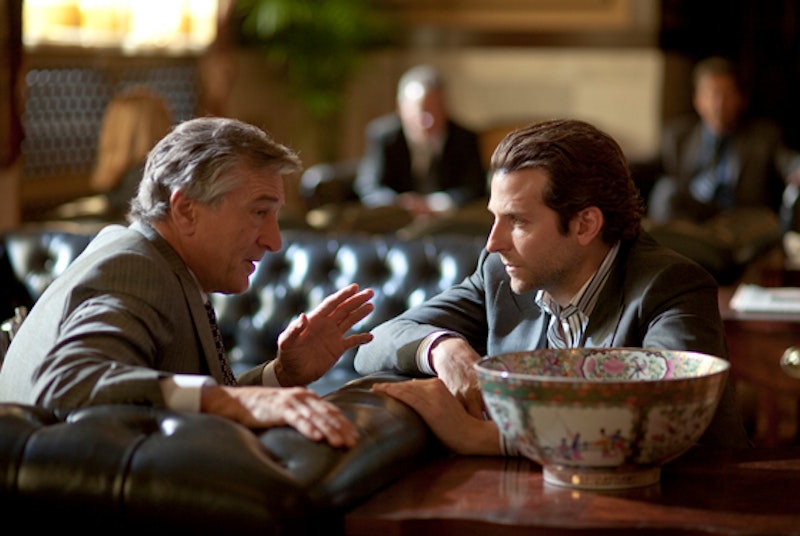 Superman was one of those ideas that conquered the world through the sheer force of its elegant stupidity. Kids like to imagine that they’re powerful. Wouldn’t they like it even better if they could imagine that they were super powerful? Pulp heroes were strong and fast and handsome; why not make a pulp hero who was stronger, faster, and wore primary-colored tights?  Okay, so the last bit didn’t necessarily make a ton of sense. But the rest of it? That was sound.

And eight odd decades later, it’s still sound. For evidence, you need only look to Hollywood, where every third film seems to be a superhero fantasy, with tights or without.

The latest entry in the genre is Limitless, a film whose power fantasies are almost as nakedly crass as those of Siegel and Shuster themselves.  Eddie Morra (Bradley Cooper) is a wasted wannabe novelist with writer’s block, one failed marriage, and a girlfriend who’s leaving him.  But then…an ancient wizard gives him a magic word of power, he is bitten by a radioactive stock broker and subsequently eye-fucked by ghostly ninja warriors who pass him their skills in their ninja semen. And everything changes!

Okay; there are no ghostly ninja warriors, nor radioactive words of power. There’s just a pill, NZT-48, which increases brain capacity, because you only use 20 percent of the brain of your scriptwriters in coming up with some stupid pseudo-science explanation, and then, hey, you’re off to impress and then screw your landlord’s bitchy wife and write your novel in four days and then clean your apartment and get a shave. Also, extreme sports. For now you are…Superyuppie!

Or, to put it another way, Limitless demonstrates with depressing finality that the power fantasies of adults are much more banal than the power fantasies of children. Super strength, super speed, heat vision, beating the bad guys and saving the day—they’re clichés now, sure, but they still have an exuberant charm. Wanting those things doesn’t make you dumb or boring. It just makes you a kid, or somebody who used to be a kid. My seven-year-old just yesterday looked at me and said, “Daddy, I wish I could fly.” And I laughed because it’s true enough to always be a surprise. Everybody wishes they could fly.

But the power fantasies in Limitless aren’t big, reach-for-the-stars daydreams. They’re cramped and puerile; Superman curdled. As soon as that landlord’s wife appears, looking less like a typical dowdy Hollywood landlord’s wife and more like a typical Hollywood hot-young-transient-fuck, you know that Eddie is going to get some.  And the rest of his successes unfold with a similar dreary predictability. He starts stock trading and makes oodles and oodles of money. He gets his old girlfriend back…and then indulges in a wild round of debauchery, canoodling (with admirable political correctness) women of varying melanin, culminating in an especially hot blonde socialite who could be in movies. Which, of course, she is.

The walk on the wild side is, we are assured, Out Of Character; it’s a side effect of the wonder drug and not of course related to Eddie’s actual real power fantasies. Besides, he’s punished for his hubris and his satyrism and, one hopes, for Bradley Cooper’s smug smile, which is insufferable even by the standards of the smug smiles usually distributed to scruffy, raffish, second-tier leading men. And since it isn’t really him doing the bad things, and since he is punished with headaches and withdrawal and the threat of being tortured by the inevitable sadistic gangsters, we can forgive him and cheer him on as he lopes inevitably to chemical-powered victory. Right?

I think that’s how it’s supposed to play, anyway. Something goes rather awry in the delivery though. Maybe it’s Eddie’s utter lack of anything resembling an individual personality—even in his wry, self-deprecating voiceover he doesn’t manage to say anything either witty or memorable. For that matter, when he’s on the superdrug that makes him supersmart, he comes across not as a genius but as a superbore. The movie shows landladies dropping their pants for him and stockbrokers struck with awe…but Eddie never actually inspires awe in the viewers. When an upwardly-mobile Eddie Murphy wowed the upper crust in Trading Places, you could sort of see it, because Murphy has charisma. Cooper though—all he’s got is a pretty face. One comes away from Limitless with the sneaking suspicion that maybe the NZT-48 is really just cocaine. Even when Eddie’s making a fool of himself, it lets him think he’s the most brilliant guy in the room.

The real reason it’s difficult to sympathize with Eddie, though, is not that he’s a bore. It’s that he’s kind of an evil schmuck. He doesn’t try to cure cancer or develop cold fusion, or even devote his life to the art he ostensibly values. He just scrabbles for cash and then runs for political office.

Along the way, incidentally, he possibly kills a woman—that blonde socialite mentioned earlier. After he slept with her she shows up murdered, and Eddie can’t remember whether it was him who did it or not. With his recently acquired millions he hires a high-powered lawyer and beats the charge, but it seems quite possible that he was responsible. Nonetheless, he shows no particular remorse. He does vomit after he hears she’s dead, but this seems as related to withdrawal symptoms as to conscience, and he certainly seems to experience no long-term guilt.

In the final scene Eddie, now a senate candidate outmaneuvers and humiliates ruthless tycoon Carl Van Loon, played by a text-messaging-it-in Robert DeNiro. It’s the final wish-fulfillment fantasy; beating big bad daddy at his own game and taking his place. Our hero started out a hollow narcissist without the focus to achieve his boring ambitions, and he ends up a hollow narcissist with the drive to be Senator—and maybe eventually President. It’s a triumph for us all, I suppose. I think I might have enjoyed the movie more if he’d gone back to being a loser, or been shot in the head by gangsters. Maybe I’m just a traditionalist at heart, but if it’s going to be a dumb old superhero power fantasy, I’d prefer that the good guys win.