Icons Are Made of Mud

Bruno Dumont’s France is a social satire that gets under your skin over time instead of hitting you over the head. 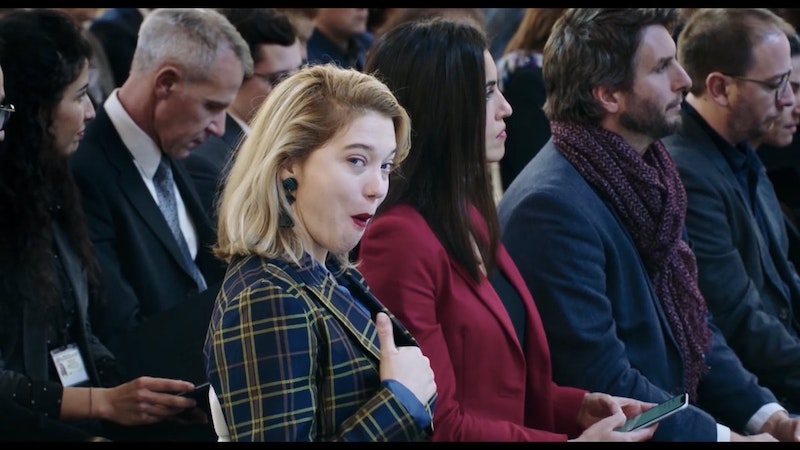 Bruno Dumont’s new film France, shot in late-2019 and delayed until summer 2021 (with a small American release just this week), is a social satire that never feels overblown, absurd, or implausible. This isn’t a movie that could only take place in the future; it belongs to the past, and last decade’s temperature. By now, this is a familiar story in movies and in real life: France de Meurs (Léa Seydoux) is a hugely popular television journalist in France, a wealthy and arrogant woman who describes herself as “apolitical,” but only when cornered by a fan. “I just have to know—are you left-wing or right-wing?” The way the question is posed, the person has already made up their mind one way or the other, but France plays it cool, and there’s no blowup or further escalation beyond “nice to meet you.”

One afternoon, France accidentally hits a courier named Baptiste (Jewad Zemmar) with her car, and as soon as she gets out to see if he’s okay, there are people taking pictures and recording her every move. Baptiste is hurt and out of work for a few months with a dislocated knee, but France didn’t hit-and-run like Sherman McCoy in The Bonfire of the Vanities, and after she makes a couple of visits to the hospitals and to the family’s home, where she cuts a fat check to “compensate” for Baptiste’s lost shifts, he’s never seen or mentioned again. Keep in mind this is the inciting incident mentioned in every synopsis of France, but at every point where you expect Dumont to put France through the ringer, or at least bring her down a peg or two, he never does.

France doesn’t skate through life after hitting Baptiste, and it’s an accident that causes a chain reaction in her life, but the events of France are much closer to reality in how thoroughly undramatic it feels. Notes that audiences that have been conditioned to expect are brought to the cusp and cut off, like the “apolitical” conversation, or Baptiste’s situation, or even when France is snookered by a rival journalist named Charles Castro (Emanuele Arioli) while “cooling off” at a Swiss resort for the sick, insane, and exhausted. They fall in love before leaving the facility, but when she finally discovers what he’s been doing, she cries and reacts as nowhere else in the film. “How could you do this to me? It’s unforgivable.” By the time her estranged husband and son go tumbling off a cliff in an exploding car, France is completely drained.

Visiting a makeshift memorial near where the car went over, she’s recognized by a woman and her child. She asks her kid to go ask France for a picture—she shakes her head “no” and shushes him away. The woman makes a face and walks away. That’s something that would’ve felt unrealistic a decade ago, but now? The amount of media attention France gets, not only from people on the street but tabloids, is relatively mild compared to many celebrities in real life. Despite losing her son, husband, and new lover, France comes out clean in the end, buoyed by the cycle of gaffes and redemption engineered by the media machine she’s given her life to.

Blanche Gardin plays Lou, her sycophant producer, who again does something that in most other movies would destroy her and France forever: during a taped segment from the Middle East, she accidentally turns the “ON AIR” lever and her casual comments about how “it would’ve been nice if one of the refugees went overboard, but on the whole it’s a good thing no one did,” and France’s soft laugh, are heard all over the country.

No matter: her family dies shortly after, and as Lou reminds her, “These things last 24 hours now. It’ll be a joke tomorrow.” She reminds France that, “You’ll be covered in shit,” but only because it’s something that needs to happen to make sure she stays at the top. The press and the public must regularly tear down and build up the famous people that are in their lives. Dumont’s refusal to put France through some giant melodrama or have her lose her job or professional status is what makes the movie work as contemporary satire: for every celebrity taken down in the court of public opinion (or just in court), there are dozens that have gotten away with plenty, only because the arbitrary all-seeing eye of the tabloids missed them or considered them boring stories.

France de Meurs is too popular to be fired. Throughout the movie, she’s recognized by people on the street, in restaurants, in other countries—and it’s never unkind. They’re always so excited to meet a famous person “in real life.” Seeing her in the flesh is just an extension of the show, and the wide eyes everyone gives her are mortifying, because it’s obvious they’re not looking at a person, they’re remembering an image. France will get under your skin in the same way that Inside Llewyn Davis does: a common story in real life with an uncommon delivery for a movie. Reality has outpaced satire, and everything in France is either plausible or likely.