Drew Barrymore's roller-derby story manages to overcome its clichés through sheer force of good will. (Grade: B) 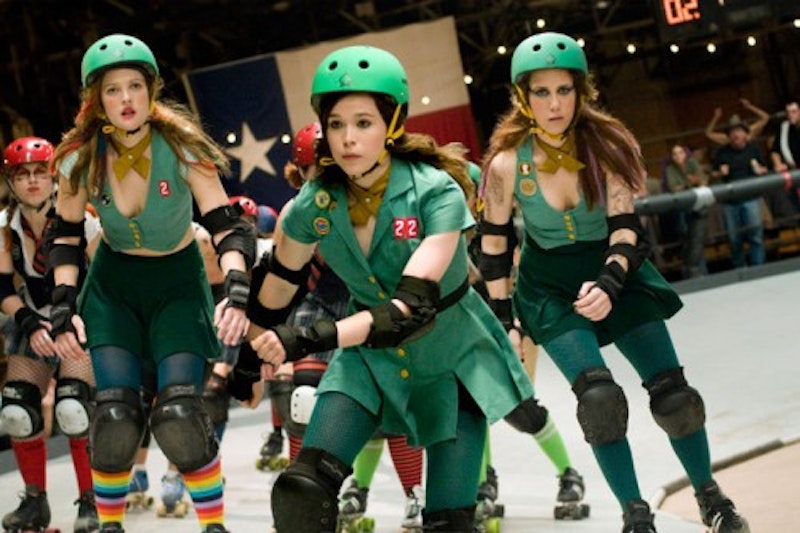 Whip It could be a little grittier, it could have a half-dozen less obvious plot developments, it could be cast more creatively, it could (like any Hollywood product) show a little more respect to flyover country, and it could be better shot. But it wore me down with its insistent cheeriness. It feels like the product of good friends having a blast collaborating with one another, and it pretty genuinely transmits that excitement to the audience. I spent a good part of the first half trying to pick it apart, and even had a hard time overcoming the fact this is definitely not "my kind of movie." But it would be disingenuous to dwell on storytelling flaws in Whip It that I was able to overlook during The Wackness and Adventureland. Like those films, Whip It's bland material is redeemed by how clearly the actors and director believe in that material.

There are, however, too many actors doing exactly what we'd expect from them in this film. Ellen Page plays the improbably named Bliss Cavendar, a yearning high schooler in fictional Bodeen, TX, who has outgrown her mother's (Marcia Gay Harden) obsession with beauty pageants. She performs in them dutifully but begrudgingly, then mocks them with her friend (Alia Shawkat, from Arrested Development) as they share shifts at a nearby barbeque restaurant. All three of these main players do what they're paid to do—Page exudes a vague screenplay-ready rebelliousness, Harden winces disapprovingly, and Shawkat plays the giggly best friend. In a Hot Topic-esque store, Bliss sees an advertisement for a roller derby in nearby Austin, and decides that it's her way out of Nowheresville.

She tries out for and subsequently joins the Hurl Scouts, a fun-loving but perennially unsuccessful team coached by a man named Razor (Andrew Wilson, also doing his stock, but funny, Zen-stoner routine). The team boasts nicknames like Smashley Simpson (played by the director, Drew Barrymore, in knockabout-hippie mode a la Charlie's Angels), Maggie Mayhem, Eva Destruction, and Rosa Sparks. The rapport between these women never feels urgent or surprising, but there is a fun quality to watching a nearly all-female movie that doesn't condescend to its audience. Juliette Lewis plays the Juliette Lewis character, a badass captain of the rival team named Iron Maven.

The steps toward Bliss' coming-of-age will surprise no one, though it's exciting to see the great Daniel Stern onscreen again as her football-loving, beer-swilling dad. The derby scenes themselves are never as exciting as they should be; cinematographer Robert D. Yeoman (who has shot all of Wes Anderson's movies, as well as the underrated 2005 thriller Red Eye) occasionally gets us down on to the track amidst the hits and trash-talk, but too often we just view the matches from the bleachers. The early characterizations of Texas life, full of beauty pageant caricatures and football obsessives, also lack any degree of subtlety.

But Whip It has pluck, and it subverts its clichés often enough to work. Rather than a simple appendage to the protagonist, Shawkat's character Pash is an Ivy-bound go-getter who slowly begins to resent Bliss' new crowd. And Kristen Wiig's portrayal of Maggie Mayhem grounds the roller derby culture in something beyond faux-jock posturing; her commitment to the sport bests even that of bus-hopping Bliss, which, more than anything else in Whip It, shows the valuable personal expression and camaraderie afforded by this subculture. There's even some subtle recognition of roller derby culture's inverted gender roles: the women show up to parties to get shit-faced and tackle one another, all while looking for emotive, tight-jeaned boys to couple with.

The movie in fact resembles its main character's early iteration; it has heart, and a personality that yearns for something freer, but it's still saddled to a clichéd vision of what it should be. Whip It is not a perfect movie, but I love the idea that young girls may get to enjoy a film that respects them.